The Arckaringa Basin is an intracratonic basin containing predominantly Late Carboniferous to Early Permian sedimentary rocks. A number of depocentres are located around a basement high (Coober Pedy Ridge, Mabel Creek Ridge and Central Basin High) associated with the Mount Woods Inlier (Figure 15). These depocentres include the Boorthanna Trough, located along the eastern margin of the basin; the Wallira, West, Penrhyn and Phillipson troughs, located near the southern margin, and the Karkaro and Mt Furner troughs in the northern half of the basin. The Arckaringa Basin is bound to the east by the Peake and Denison Inlier (Denison and Davenport Range), to the south by the Gawler Ranges and Stuart Shelf and to the north and west by the Officer Basin. Troughs and bordering inliers in the vicinity of the eastern margin coincide with a series of north-west regional structures associated with the Torrens Hinge Zone and the northern extension of the Adelaide Fold Belt. The south-western margin is coincident with the Karari Fault Zone (Figure 15).

The western Arckaringa Basin is thin, geologically simple and only moderately faulted while the eastern Arckaringa Basin is deep and geologically complex. Additionally, the base of the Permian strata displays a complex, glacially-scoured surface with significant erosional relief. Cretaceous and Jurassic units of the Eromanga Basin overlie the majority of the Arckaringa Basin (Figure 16 and Figure 17). The Eromanga Basin regional unconformity displays evidence for major incision and erosion, particularly within the northern and north-western Arckaringa Basin, where paleochannel development is evident (Figure 16). Additionally, there is seismic evidence of gentle tilting, low angle truncation and erosion of upper Mount Toondina Formation coals below the base of this unconformity (Figure 16 and Figure 17).

The Arckaringa Basin is underlain by early Cambrian, Proterozoic and Archean rocks inclusive of the Stuart Shelf and in part by strata of the Warburton Basin and Officer Basin (Figure 15). The Proterozoic and Archean rocks are primarily composed of metasedimentary and igneous units and underlie the central and southern Arckaringa Basin. The Warburton Basin and Officer Basin are large sedimentary basins primarily of Cambrian to Devonian-age. The Warburton Basin occupies large portions of north and north-east SA and southern NT, whereas the Officer Basin occupies large portions of western SA and eastern WA (Gravestock et al., 1995; Radke, 2009).

Current intra-plate tectonic activity is interpreted to be a function of compression caused by the continents northward drift and subsequent collision with the Indonesian Archipelago, a regime that commenced approximately 43 million years ago (Sandiford et al., 2009). In the general vicinity of the Arckaringa Basin, this compression is primarily orientated east-west and is generally larger than the principal vertical stress (Hillis et al., 1998; Hillis and Reynolds, 2000; Reynolds et al., 2005). Neotectonic expressions in the general region include reported seismic activity along the eastern margin of the Arckaringa Basin in the vicinity of the Adelaide Geosyncline (Geoscience Australia, 2014). Additionally, several authors including Aldam and Kuang (1988), Wacklawik et al. (2008), Karlstrom et al. (2012) and Keppel (2013) have summarised and presented evidence that GAB springs, which also coincide with the eastern margin of the Arckaringa Basin, may also be an expression of neotectonic activity. 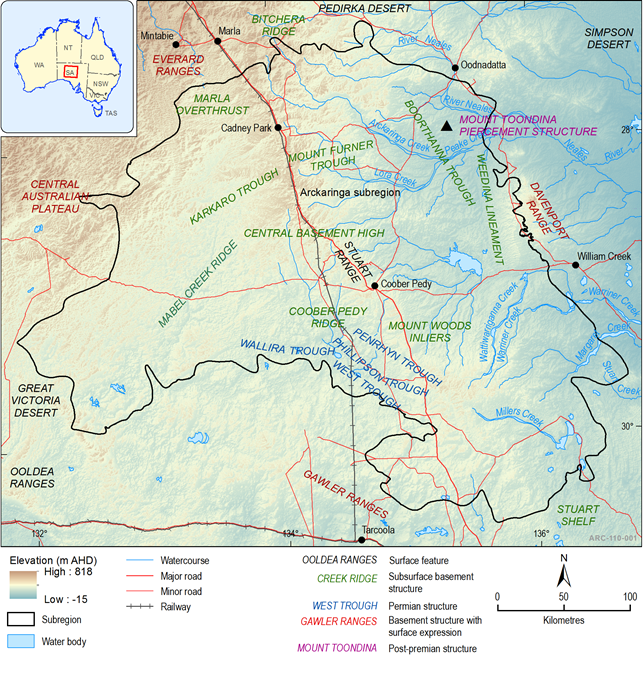 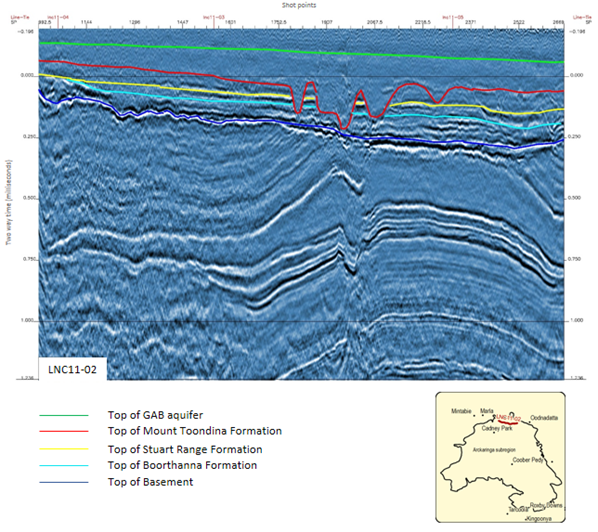 The Permian section is thin and largely comprises older Permian stratigraphy (Boorthanna Formation and Stuart Range Formation). Major incision and erosion is evident at the base of the Eromanga Basin regional unconformity. Large channels incised into the Permian succession are filled with chaotic, semi-transparent seismic facies identical to that of the Algebuckina Sandstone. These large channels are most likely sand-filled and therefore have important implications with respect to aquifer connectivity between the overlying Great Artesian Basin and the Mount Toondina Formation. The base of the Permian section is defined by an angular unconformity. 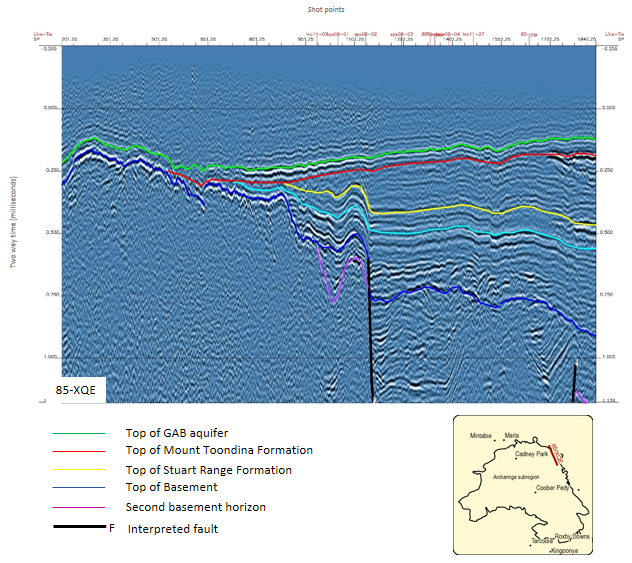 A steep major fault offsets the Permian stratigraphy. The preserved Permian section is considerably thicker to the south of the fault.

The Mount Toondina Piercement Structure occurs within the north-eastern Arckaringa Basin, approximately 45 km south of Oodnadatta. It is one of the few localities where Arckaringa Basin sediments are known to outcrop. This structure was first interpreted to be a diapir, but since Youles (1976) an alternative impact crater hypothesis has been the focus of study (Shoenmaker and Shoenmaker 1988; Plescia et al., 1994; University of New Brunswick, 2009) (Figure 15). More recently, Haines (2005) stated that existing seismic data over the piercement structure clearly shows no evidence for a diapir.

Abundant outcropping and sub-cropping Mesozoic sedimentary formations, most notable being outcrop of the Bulldog Shale, in the vicinity of the Arckaringa Basin has a significant role in determining the composition of the regolith in the subregion. In contrast, there is very little outcrop of Arckaringa Basin strata, being restricted to isolated occurrences on the western flank of the Peake and Denison Inlier, near Margaret Creek in the south-east corner of the basin and also in the south-west corner of the basin (Figure 18). Most of the subregion, notably the central and eastern parts of the Arckaringa Basin, have been interpreted to be dominated by erosional landforms composed of moderately to highly weathered bedrock or residual soil materials derived from the Mesozoic strata (Krapf et al., 2012). Other than aeolian sediments, depositional landforms and associated alluvial, colluvial and other transported sediments are primarily restricted to the immediate vicinity of drainage channels or within the headwaters and catchments of drainage systems. Consequently, these regolith landforms and associated sediment types are mainly in the larger drainage systems, associated with the Neales River/Peake Creek and Margaret River (Figure 18). Lacustrine and spring-related landforms are restricted in extent, but are primarily at Lake Cadibarrawirracanna, the Wilkinson Lakes region, downstream of Millers Creek, within Weedina Creek and with springs near the eastern margin of the Arckaringa subregion (Krapf et al., 2012) (Figure 18).

Aeolian landforms and sediments are primarily within the western and southern Arckaringa subregion, with smaller aeolian deposition west of the Peake and Denison Inlier and in the vicinity of the Millers Creek wetland area (Krapf et al., 2012). 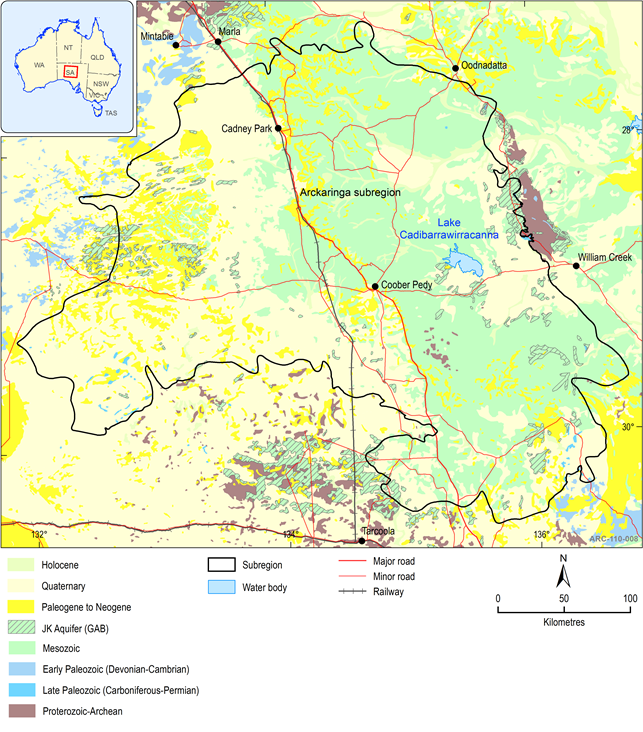 The JK aquifer includes Cadna-owie Formation and the Algebuckina Sandstone. Together these two units represent the most important GAB aquifer within the Arckaringa subregion.