A paucity of data through the majority of the Arckaringa Basin renders the determination of the Arckaringa Basin groundwater system difficult beyond a very general and basic understanding. The one exception is the south-east corner of the Arckaringa Basin, where adequate data allows for a more detailed assessment (Figure 23). At this localised level, SKM (2009) suggest that productive aquifer units may be present as relatively isolated semi-discontinuous ‘pods’ related to sporadic turbidite flows within an otherwise quiescent glacio-marine environment with further discontinuity arising from syn- and post-depositional faulting. Large observed draw-downs (>50 m) and complementary results from a shutdown test conducted at a production bore associated with the Prominent Hill Mine wellfield suggest that only weak hydraulic connectivity between multiple aquifers exists within the Boorthanna Formation. Additionally, secondary porosity development, either by mineral dissolution or structural deformation, is seen as an important variable with respect to aquifer quality.

SKM (2009) suggest the existence of deep groundwater flow associated with the Boorthanna Trough (north to south), although there is limited supporting data. Additionally, based on limited hydraulic head data, a groundwater flow system potentially exists between the western Arckaringa subregion, where the basin abuts or overlies the Officer Basin and the Stuart Shelf. Given the sedimentological similarity between Mesozoic, Mount Toondina and Boorthanna formations in this region, such a groundwater system may be inclusive of GAB formations. With respect to a more regional scale, the separation of the Mount Toondina and Boorthanna formations by the Stuart Range Formation may lead to the existence of two regionally extensive aquifers with restricted or spatially heterogeneous connectivity that have determinably different hydrodynamics and flow characteristics.

Typically unconfined groundwater may be found in a number of geological formations that occupy the near surface environment over the Arckaringa subregion. Wopfner (1961) suggested that domal structures developed within underlying strata had an important influence on the occurrence and distribution of shallow groundwater. In the immediate vicinity of the Arckaringa Basin, little is known concerning this groundwater; however more is known to occur from similar aquifers in the wider vicinity of far north SA.

Cenozoic aquifers including aeolian deposits are scattered throughout the landscape. While it is possible that local flow systems occur, it is not assumed that these aquifers are continuous across the subregion. That being said, the phreatic surface presented in Figure 24 which in many cases is representative of groundwater within Cenozoic aquifers reflects the regional topography, with areas of high groundwater elevation found near the Musgrave Ranges and the Central Australian Plateau to the north-west and west respectively. Areas of low phreatic elevation occur in the vicinity of Kati Thanda – Lake Eyre and Lake Torrens, located to the east and south-east respectively. Areas of apparent localised mounding occur in the vicinity of the Stuart Shelf and Gawler Ranges, near the centre of the Arckaringa Basin, and near of the north-western and southern margins of the basin. 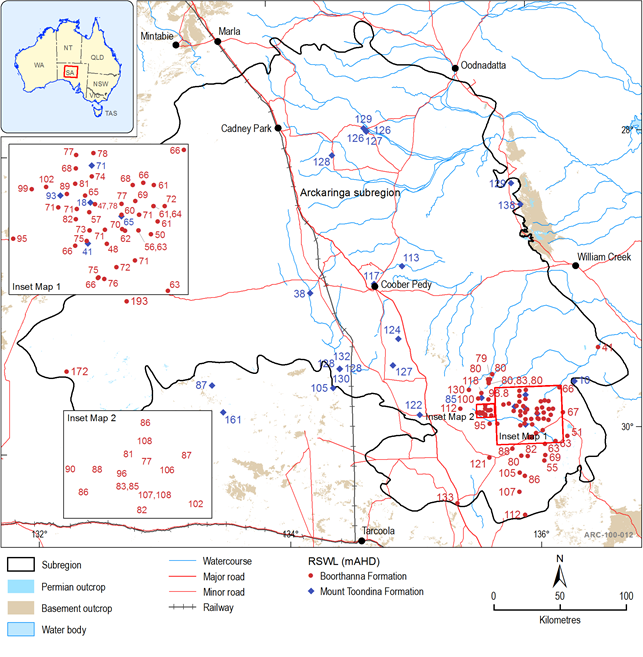 Although limited information is available on Cenozoic aquifers across the Arckaringa subregion, groundwater extraction from these aquifers via pumping is considered minimal. Evaporation and transpiration are thought to be the main mechanisms controlling groundwater loss from the system. 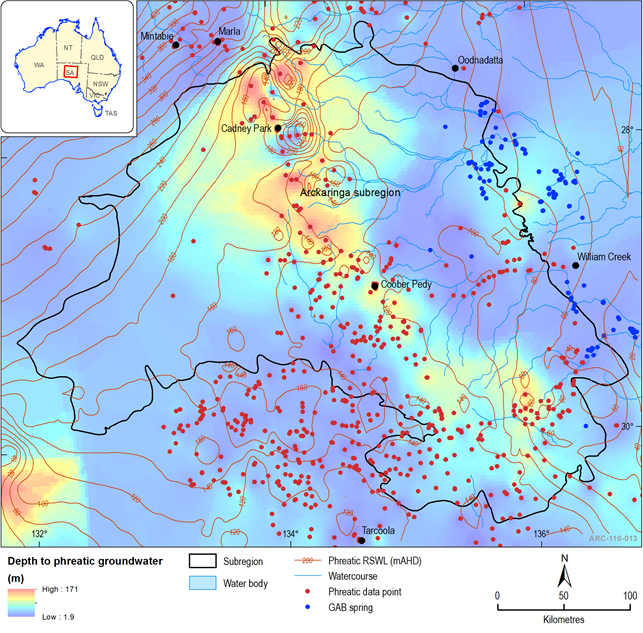 Note: Although phreatic groundwater is ubiquitous across the landscape and is commonly represented by groundwater in Cenozoic formations, this surface does not necessarily imply continuous groundwater movement between formations, nor is it completely restricted to Cenozoic formations. The watertable measurements displayed have not been corrected for density because density corrections were determined to have only a negligible effect on head.

The Great Artesian Basin (GAB) is one of the largest groundwater basins in the world, underlying approximately 1.7 million km2, or 22% of the Australian continent (Habermehl, 1980). The GAB is the most widely known and utilised groundwater resource and overlies most of the Arckaringa subregion. There have been several texts written about the GAB; recent summaries and the latest research about the GAB in the vicinity of the Arckaringa Basin may be found in Love et al. (2013a), Love et al. (2013b), Keppel et al. (2013) and Smerdon et al. (2013). Geologically, the GAB describes a terrestrial to marine, Cretaceous–Jurassic hydrogeological super basin that covers much of eastern and central Australia. Although the name GAB may cover a number of smaller sedimentary basins, in SA the GAB is synonymous with the Eromanga Basin (Wohling et al., 2013).

Although there are a number of aquifer units within the GAB, the most important with respect to utilisation in the Arckaringa subregion are the Cadna-owie Formation and Algebuckina Sandstone (and lateral equivalents), which can be collectively referred to as the main GAB aquifer (JK aquifer) (Keppel et al., 2013). Typical yields of the GAB within the Arckaringa subregion generally range between 0.1 L and 6.0 L/second, although larger yields of up to 130 L/second have been reported for the GAB aquifer outside the subregion (e.g. Olympic Dam Wellfield B, located approximately 30km east of the south-eastern margin of the Arckaringa Basin).

(Lau et al., 1995a; Lau et al., 1995b). Semi-confined to confined aquifers may be present in the Murnaroo Formation in the south-eastern part of the Officer Basin (Alexander and Dodds, 1997) while shallow groundwater supplies may be found in the Trainor Hill Sandstone (AGT, 2012).

Read (1990) provides yields from Officer Basin sandstone units between <0.1 to 3 L/second, while AGT (2012) reports yields between 1 and 5 L/second for wells within the Officer Basin at depths between 50 m and 400 m. Additionally, AGT (2012) also summarise yields of up to 40 L/second from very deep petroleum bores.

A number of localised fractured rock and karstic aquifers occur within crystalline Cambrian and Precambrian basement rocks in the vicinity of the Arckaringa subregion. Of particular importance to the subregion are those found within the Stuart Shelf, located near the south-east corner of the Arckaringa Basin. As is the nature of most fractured rock aquifers, the hydrogeological properties are highly dependent of post-depositional deformation and therefore can be highly heterogeneous.