The Stony Plains are the predominant IBRA bioregion in the Arckaringa subregion, dominated by vast, gently undulating gibber and gypsum plains dotted with occasional lakes, claypans, low hills, overlain in some areas by dune systems and intersected by watercourses draining east towards Kati Thanda – Lake Eyre. An assessment of regional species status for each IBRA subregion was recently undertaken for the Outback region (including most of the Arckaringa subregion) (Gillam and Urban, 2013). While most of the IBRA bioregions have been the subject of biological surveys, the Great Victoria Desert IBRA bioregion is relatively unknown. The Great Victoria Desert IBRA bioregion comprises a significant portion of the Arckaringa subregion, however it mainly consists of dune fields and contains only a few, highly ephemeral playa lakes, mostly within the Tallaringa Conservation Park and Woomera Protected Area (Table 11, Figure 35).

The Arckaringa subregion has not been cleared of native vegetation, however, the natural biodiversity and condition has been altered through changes in burning regimes, the introduction of pastoral grazing, pest plants and animals, additional watering points and free-flowing bores, changes in water pressure to Great Artesian Basin (GAB) springs, and changes to surface water flow through construction of infrastructure (DEH & SAAL NRMB, 2009). The majority of the subregion is currently used for pastoral grazing; other significant land uses comprise military testing and conservation (section 1.1.2). Most of the vegetation of the subregion has been mapped, and is dominated by low chenopod shrublands with wattle (Acacia spp.), hop-bush (Dodonaea spp.) and emu-bush (Eremophila spp.) shrublands found in dunefields and ranges and coolabah (Eucalyptus coolabah ssp. arida) woodlands along watercourses (Table 11; Figure 35 ).

The subregion has undergone gradual desertification over past millennia (Cohen et al., 2011; Magee et al., 2004), leading to the isolation of aquatic ecosystems (Gotch 2013b). The aquatic ecosystems, including floodplains, floodouts, springs and ephemeral watercourses provide critical refuge and vital habitats and resources for many species, including aquatic and terrestrial species (McNeil et al., 2011a). Ecological processes are influenced by high levels of disturbance and variability driven by the variable and arid climate. Large floods occur infrequently, but drive spectacular booms in biotic production in the Lake Eyre Basin (Kingsford, 1999; Bunn et al., 2006). Clusters of smaller floods prolong waterbody persistence and provide an increased opportunity for dispersal between habitats compared with isolated flood events (Puckridge et al., 2000). Flood clusters increase the extent of the second and follow-on floods and produce a cumulative response from aquatic biota (Puckridge et al., 2000; Reid et al., 2010). During extended dry periods, aquatic ecosystem-dependent species exist either in highly fragmented sub-populations in isolated refugia, or as desiccant resistant propagules (e.g. eggs or seeds), or by reducing their productivity. When sufficient rainfall events occur, the surviving sub-populations emerge, disperse to other habitats, mix with other sub-populations and rebuild their populations. Algebuckina Waterhole, located 2 km downstream of the Arckaringa subregion in the Neales catchment, is the only surface water-driven aquatic ecosystem of the Neales catchment not to have dried out in living memory (Costelloe, 2011), and is the most critical refugial habitat for riverine fauna (McNeil et al., 2008). The cease-to-flow depth of Algebuckina Waterhole has been shown to vary in response to sedimentation and flow events and, at its shallowest has been recorded at 3.45 m and its deepest at 4.8 m (Costelloe 2011b). Based on modelling it is vulnerable to drying out through a combination of extended drought and sedimentation (see Section 1.1.5.1; Costelloe, 2011a, 2011b). Therefore, all obligate aquatic species in the catchment dependent on this habitat are also vulnerable, with potential ‘follow-on’ effects through the trophic structures operating in the catchment. Therefore, the only truly permanent waterbodies are the GAB springs that occur along the eastern boundary of the Arckaringa subregion. Recent research has shown that discharge has occurred at the same general locations for up to 465,000 years (Priestley et al., 2013). These evolutionary refugia support many short-range endemic species (Fensham et al., 2011) and relict species that would have been more widespread under past climatic conditions (McNeil et al., 2011b; Davis et al., 2013; Gotch, 2013). The community of species dependent on discharge from the GAB is listed as an endangered ecological community under the Environment Protection and Biodiversity Conservation Act 1999 (Cth) (EPBC Act) with reductions in spring flow from groundwater development being one of the main threats (Fensham et al., 2010).

The national approach to identifying High Ecological Value Aquatic Ecosystems (HEVAE) is based on multiple criteria: diversity, distinctiveness, vital habitat, naturalness and representativeness (AETG 2012b). In a trial application of the HEVAE process in the LEB, Kati Thanda – Lake Eyre, into which the larger surface catchments of the Arckaringa subregion drain, was one of only two aquatic ecosystems in the entire LEB to score very high in three HEVAE criteria (Hale et al., 2010). The Lake Eyre supergroup of springs were split into three geographical areas, each of which scored very high in at least one HEVAE criteria (Hale et al., 2010). Both Kati Thanda – Lake Eyre and the Lake Eyre supergroup of springs are also listed in the Directory of Important Wetlands in Australia. 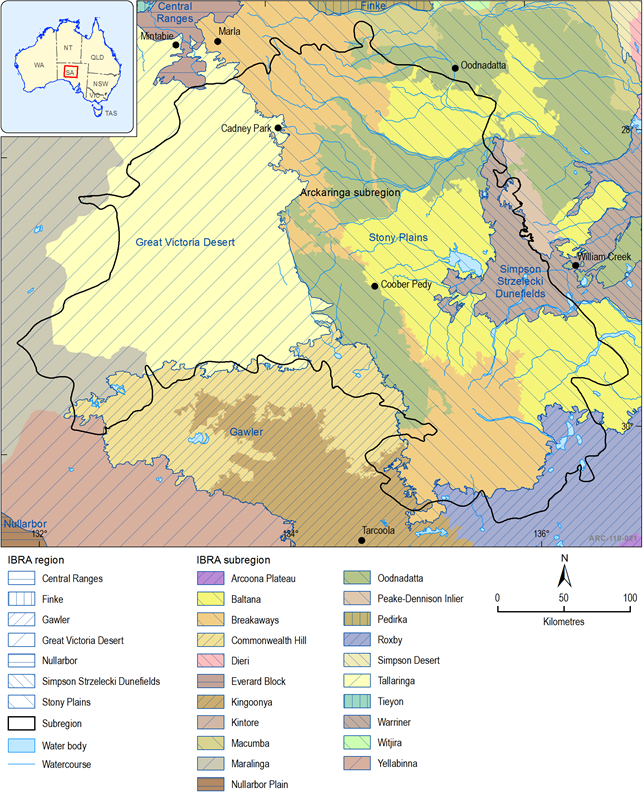 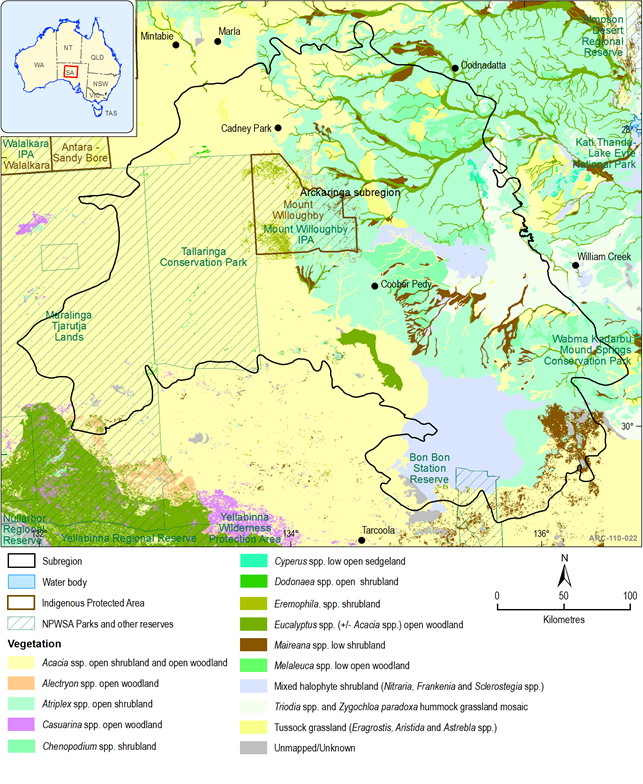