The HYDMEAS database (NSW Office of Water, Dataset 1) contains the observations of the regional groundwater monitoring network. Groundwater level measurements from 170 monitoring sites across the Namoi subregion (see Figure 17 in Section 2.1.3 in companion product 2.1-2.2 for the Namoi subregion (Aryal et al., 2018a)) were selected as having at least one reliable spatial attribute (location or elevation). Of these, 36 monitoring sites did not have reliable observations and were removed from the observation dataset used to constrain the model parameters. From the remaining monitoring sites, those sites which have at least four records in any year between 1993 and 2012 were identified; this left 134 monitoring sites for use in constraining the model. The groundwater level data from these 134 sites (Figure 20, Table 11) were used for evaluating the objective function that was used for constraining the model predictions as described in Section 2.6.2.8.1.2. Agricultural extractions are represented in the model from the year 1983 onwards at a constant rate, therefore the model simulations do not accurately capture the expansion of groundwater extraction from the 1970s onwards and hence the water levels are not comparable to the observations during the first ten years of simulation. Considering this, the observation data for the period prior to 1993 were discarded. As the agricultural extraction is implemented in the model at a constant rate throughout the year, the seasonal dynamics of extraction and therefore groundwater levels are not captured, and so only those monitoring bores with enough records to form a representative annual average water level were used. It is noteworthy that this assumption does not grossly affect the primary objective of the model development (i.e. simulation of drawdown due to additional coal resource development that occurs after 2012).

Local monitoring information, including monitoring data from mining companies, is not included in the analysis to avoid biasing the objective function used for constraining the model with measurements predominantly affected by local hydrogeological conditions that are not captured in the regional model. Mining companies install monitoring wells in the vicinity of the mine sites to capture information about local hydrogeological conditions, surface water features or local lenses of more or less permeable strata. Within a site-scale groundwater model, these local features and stresses can be represented with sufficient spatial detail for the groundwater level observations to be used to infer local parameter values or constrain local predictions. In a regional-scale model, the representation of local features and stresses cannot be done at a resolution sufficient to match the information from local-scale observations and the regional-scale parameters will compensate for the missing spatial detail (see companion submethodology M07 for groundwater modelling (Crosbie et al., 2016)). As shown by Doherty and Welter (2010) and White et al. (2014), this can lead to a bias in the inferred parameter values, and in turn to biased predictions. Local information can be used in a regional context, if the tolerance of model-to-measurement misfit is increased to account for the missing local detail. This means in the vicinity of mines where, due to the historical pumping rates, hydraulic gradients are expected to be high, large discrepancies between modelled and observed groundwater levels should be expected and tolerated. Effectively, this reduces the information content of the local observations. Establishing an appropriate weighting or tolerance for local observations is site-specific and subjective. In order to limit the propensity of biasing regional parameter values through the incorporation of local-scale observations and the inherently subjective weighting of these observations, local-scale information from mine groundwater-monitoring networks is not used. 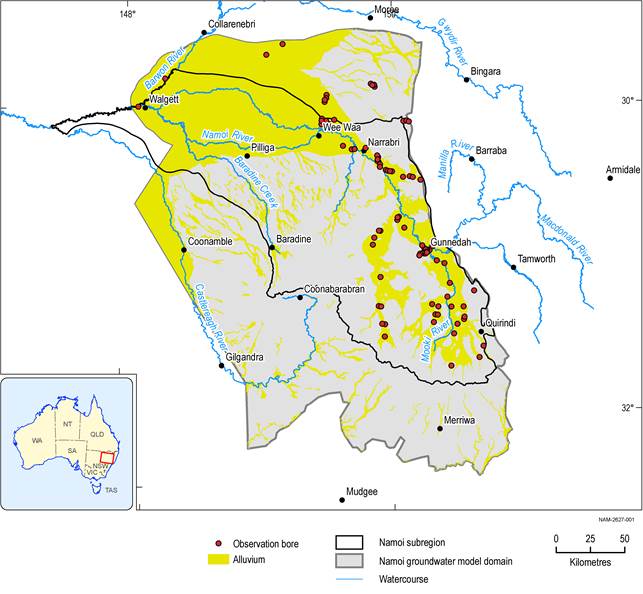 Section 2.6.2.8.1 provides the details of how these groundwater level observations are integrated into the objective function to constrain the groundwater model.

The groundwater model was not designed to simulate total streamflow in the river system within its model domain, but rather to generate estimates of the change in surface water – groundwater flux due to coal resource development at points along a prescribed stream network. Constraining these fluxes requires regional estimates of the surface water – groundwater flux, which, as discussed in Section 2.1.5 in companion product 2.1-2.2 for the Namoi subregion (Aryal et al., 2018a), are not easy to determine.

As an alternative, mean daily streamflow at 31 gauges (Table 12) based on long-term observed streamflow hydrographs (NSW Office of Water, Dataset 3) has been used as a proxy to constrain estimates of surface water – groundwater flux by the groundwater model. Parameter combinations that result in long-term historical surface water – groundwater fluxes in excess of the mean daily surface water flow were deemed unacceptable. This constraint is considered to be conservative because in the perennial stream reaches in the Namoi subregion the majority of the flow is sourced from upstream outside of the groundwater model domain and so would be expected to have a low percentage of flow sourced from groundwater within the model domain. The majority of the headwater streams in the Namoi subregion are ephemeral and so this criterion will accept any stream modelled as being losing in the groundwater model.

Section 2.6.2.8.1 provides more detail on how these streamflow observations are integrated in the objective function to constrain the groundwater model.

These gauges are also displayed in Figure 11 of companion product 2.6.1 for the Namoi subregion (Aryal et al., 2018b)

Another type of observation to constrain the groundwater model is the expected annual total water production during coal seam gas (CSG) production from the Narrabri Gas Project and other coal mining projects as reported in companion product 2.1-2.2 for the Namoi subregion (Aryal et al., 2018a). In the groundwater model, CSG production and water extraction from the mines are implemented using the Drain package of MODFLOW-USG. The volume of water that needs to be extracted to achieve the specified drawdown at the cells with a drain boundary will therefore depend on the hydraulic parameters of the model. While it is by no means a goal of the bioregional assessment (BA) modelling to reproduce these values exactly, the simulated water extraction rates across multiple model runs should be within a range that is consistent with these estimates, especially since these are based on detailed local information and pilot production testing. The usage of the data in objective functions is further described in Section 2.6.2.8.1.