The Namoi subregion contains many bores licensed to extract groundwater (Bioregional Assessment Programme, Dataset 1). After removing points that lie outside the model domain and those associated with mine licence volumes which are already accounted for in the model via the water makes (Section 2.6.2.5), 11,785 production bores were represented in the model (Figure 15) (Bioregional Assessment Programme, Dataset 1). 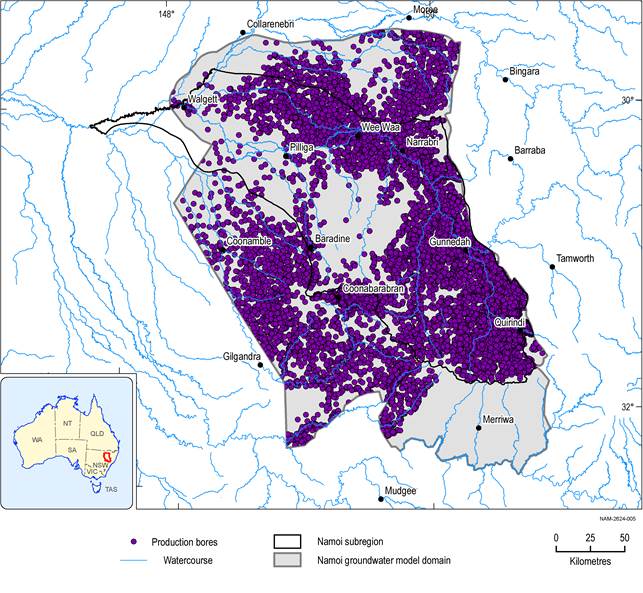 Bioregional Assessment Programme (Dataset 3) provides information on the category of the bore (e.g. licence type such as ‘Basic Right’ or ‘Supplementary’), the groundwater source targeted, and the licensed extraction volume (ML/year). The actual time series of extraction from 1983–2012 is not known as metering of bores has only been available for a fraction of this time and not all bores are required to be metered (e.g. stock and domestic bores).

The majority of extractions are from the two alluvial formations (Peña-Arancibia et al., 2016). These extractions are potentially the greatest sink of groundwater in the region (apart from natural evapotranspiration), so represent a significant source of uncertainty in the water balance. Groundwater-use data come from metering in some groundwater sources, for example all licensed bores in the Upper Namoi water sources (approximately 1100 bores) (Barrett, 2010) are metered. However, metering of groundwater extraction is not yet mandatory across all groundwater sources (NSW Office of Water, 2012b). Metering is not required for stock and domestic bores (license type ‘basic right’), meaning that basic right volumes are estimated.

aStock and domestic usage estimates for each groundwater source were taken from the relevant water sharing plans.

bNumber of basic right bores was calculated from the Bioregional Assessment Programme (Dataset 3).

For all other bores, the ‘entitlement volume’ provided in Bioregional Assessment Programme (Dataset 3) was used as the extraction rate. A constant rate of extraction is assumed over the simulation period 1983 to 2102. As the timing of extractions is not recorded for each bore, the simplistic assumption is made that the full entitlement is extracted at a uniform rate over the year at each bore. Groundwater extractions are the same under the baseline and under the CRDP.

As demonstrated in Peña-Arancibia et al. (2016) licensed extraction volumes (entitlement volumes) are, on average, significantly higher than actual use volumes, and entitlement volumes are currently in a process of adjustment (generally decreasing) through the implementation of water sharing plans. For example, the ongoing program of reducing groundwater entitlement volumes has meant that the entitlement volume for all ‘Supplementary Water’ licenses has been reduced to zero from the start of the 2015–2016 water year. Due to these factors and the inherent uncertainty in quantifying unmetered extraction volumes, there will be some impact on the ability of historic and future modelling to accurately represent the water balance within the subregion.