Coal mining and CSG development activities in the Namoi subregion focus on the Hoskissons Coal and Maules Creek Formation in the Gunnedah Basin. The majority of groundwater-dependent assets in the Namoi subregion rely on water from the alluvial formations, Pilliga Sandstone or in the outcrop of other formations. Therefore, these formations were conceptualised as independent layers in the numerical groundwater model (Table 5). The Namoi alluvium was vertically discretised into two different model layers corresponding to the upper Narrabri and lower Gunnedah formations. Other Cretaceous-age formations that are present between the alluvium and Pilliga Sandstone are conceptualised as an interburden layer with depth-dependent hydraulic characteristics. Similarly, the formations between the Pilliga Sandstone and the Hoskissons Coal and between the Hoskissons Coal and Maules Creek Formation are represented in the numerical groundwater model by means of interburden layers with distinct effective hydraulic characteristics that vary with depth. A more detailed explanation of this depth-varying parameterisation is provided in Section 2.6.2.8.2.6. The basement rock under the Maules Creek Formation is represented by means of another layer in the numerical model layer. This resulted in a numerical model architecture with nine layers to represent the hydrostratigraphy. (Note that each interburden layer in the hydrostratigraphy consists of three numerical layers in the groundwater model to allow for the timing of drawdown to propagate vertically through the interburden.)

Table 5 Hydrostratigaphy of groundwater model for the Namoi subregion

Geological models identify more geologically distinct units in the Namoi subregion (see companion product 2.1-2.2 (Aryal et al., 2018a)), but building a numerical model with a minimum of one layer per distinct geological formation was deemed unnecessary for the BA modelling given that the vertical propagation of depressurisation into any layer depends only on the effective maximum vertical hydraulic conductivity across the underlying formations. Parsimony in vertical discretisation of the model was also useful for minimising the model run times and improving model stability that was required for running the model thousands of times as envisaged by the BA groundwater modelling methodology.

Each interburden layer is an accumulation of different geological layers, in some cases lumping aquifers with aquitards. This can be accommodated within the model by using a wide range in the parameterisation of the hydraulic properties, see Section 2.6.2.6 for more details. Discretisation of each interburden layer into three numerical model layers with spatially variable hydraulic characteristics also ensured that uncertainties in the hydraulic properties of the geologic formations in the Gunnedah and Surat basins could be evaluated during the uncertainty analysis.

The analysis done for the Narrabri Gas Project (CDM Smith, 2014) showed that faults are not important in the Namoi subregion for propagating drawdown between layers. The lack of hydrocarbon presence in the Surat sequence in this region and the sealing effect produced by the Napperby Formation shale in general indicates that faults may not act as conduits that can affect regional-scale drawdown prediction. Therefore there are no faults built into the model. However, further research is required to quantify the potential effect of geologic structures on the propagation of depressurisation impacts.

The numerical model was built using MODFLOW-USG and uses unstructured Voronoi grids. The model cell size in plan view was chosen to be 300 m in the vicinity of the mines, CSG project area and river nodes, and up to 3 km elsewhere. The plan mesh is shown in Figure 8. The finer mesh clearly identifies the areas of mining and coal seam gas development within the Namoi subregion. Also visible is a higher density of elements along the river network. Smaller-sized Voronoi cells (distinct polygons/cells within the modelled area for which model inputs/parameters/outputs are defined) were included along the rivers to provide higher resolution output of the change in surface water – groundwater flux for input into the Australian Water Resources Assessment river model (AWRA-R) (see companion product 2.6.1 for the Namoi subregion (Aryal et al., 2018b)). The resulting mesh has 58,649 Voronoi cells in plan view, covering an area of approximately 59,000 km2. The number of cells in each model layer may be less than this number depending on the extent of each model layer which can be smaller than the entire model domain where layers are absent. Layers are absent in the numerical groundwater model where they do not exist, the most obvious example is the alluvium which only covers a fraction of the the model domain (Figure 9). 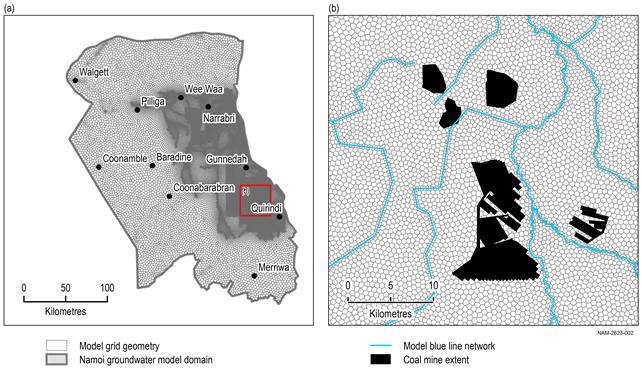 A plan view of the model grid is shown in Figure 9 highlighting the model layers that outcrop and a cross-section is shown in Figure 10 approximately following the river downstream. This shows that in the south the alluvium is sitting on the Gunnedah Basin layers but in the north the Pilliga Sandstone of the Surat Basin is in between the Gunnedah Basin layers and the alluvium. 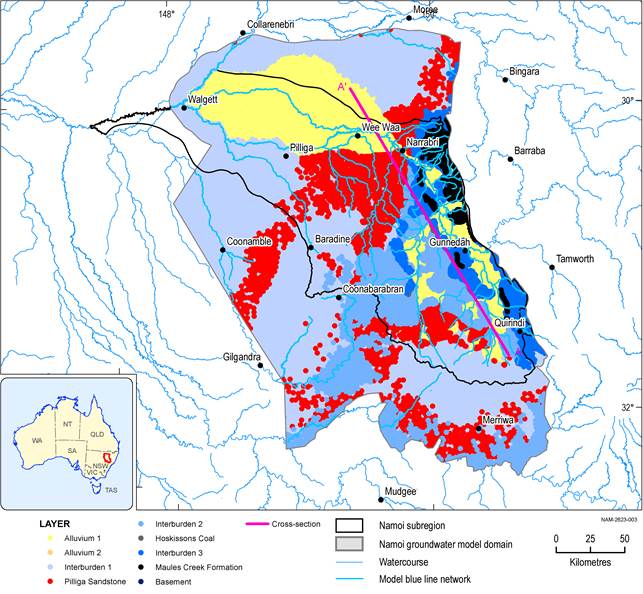 Alluvium 2, Hoskissons Coal and basement do not outcrop so cannot be seen in this figure.

Location of cross-section is shown on Figure 9.