The model is designed to estimate drawdowns caused by the coal resource developments in the modelled CRDP at specified locations in the upper Permian coal measures, the Clematis Group and the Cenozoic and Quaternary cover sediments. These model nodes are presented in Figure 4 and Table 4 in Section 2.6.2.1 . Table 14 conveys the same information, together with a short description of each model node, its water source and the model layer the model node is assigned to.

As outlined in Table 14, the water source for two model nodes is interpreted to be the Ronlow beds (part of the GAB). Conceptually, it is unlikely there could be measureable drawdown impacts to aquifers in the Ronlow beds due to its distance from coal resource development areas and the presence of a thick aquitard (the Moolayember Formation) between the Ronlow beds and the underlying Clematis Group. To test this hypothesis, some model nodes, for which the water source is the Ronlow beds, are incorporated into the model. For the sake of model simplicity and for minimising model runtimes, the decision was taken to attribute these model nodes to the Clematis Group. The reasoning being that, the probability of a measurable impact in the Ronlow beds will always be less than the probability of measurable impact in the underlying Clematis Group at these particular model nodes. A similar approach was also taken for model nodes associated with wetlands and streams underlain by the Moolayember Formation (e.g. Lake Galilee).

In addition to the model nodes listed in Table 14 and Figure 4, drawdown is also calculated for each model layer at the model nodes indicated in Figure 10. These model nodes are distributed throughout the model domain with a higher density around areas of high potential hydraulic gradients (i.e. the coal mines and no-flow boundary).

GDE = groundwater-dependent ecosystem; TWS = town water supply; the topmost layer in the groundwater model is assigned ‘0’; NA indicates drawdown at model node could not be simulated. Potential hydrological change at this location will be discussed qualitatively in companion product 3-4 (impact and risk analysis) for the Galilee subregion.

The GW AEM calculates a time series of the change in groundwater level due to coal resource development. As initial conditions in each model layer are set equal to zero metres, this change in groundwater level corresponds to the drawdown. Figure 11 shows an example of these time series. For each model node, only the drawdown (dmax; the maximum difference in drawdown between the CRDP and baseline, due to additional coal resource development) and year of maximum change (tmax) are recorded and stored. Figure 11 illustrates how these values are calculated. 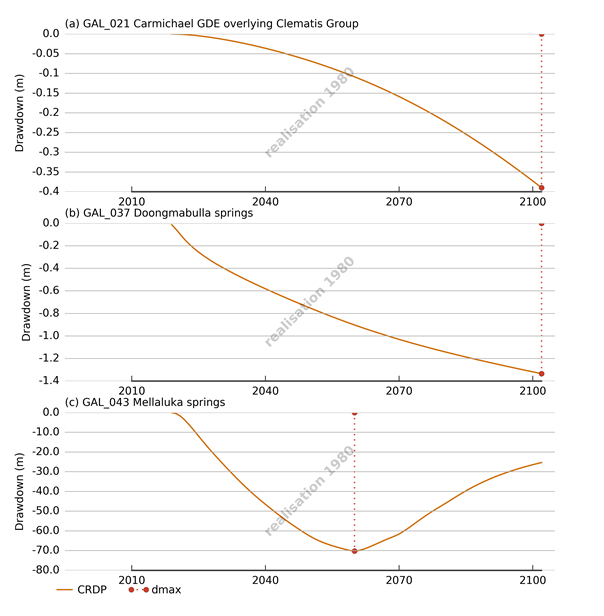 In the remaining sections of this product, the results of the modelling will always be presented as summary statistics of the resulting predictive distributions, such as the median dmax value or the probability that dmax exceeds a pre-specified threshold.