Five numerical groundwater models have been prepared by mine proponents to assess the impacts of proposed coal mine development in the Galilee subregion. These are for Alpha and Kevin’s Corner, Carmichael, China First, China Stone, and South Galilee coal projects. Most of these models simulate the impact of only one or two mines. These models are not suited for the Galilee subregion bioregional assessment (BA) as they are relatively local in scale, have varying model configurations, and are not readily available for the Bioregional Assessment Technical Programme.

The Galilee Basin hydrogeological (GBH) model is a regional numerical groundwater model that encompasses the whole of the Galilee subregion. It has been recently developed as part of a joint project between the Queensland Government and Australian Government. This complex numerical model incorporates the whole of the Galilee Basin, and parts of the overlying Eromanga Basin and Cenozoic sediments. It utilises input data compiled and generated for this BA. The predictive runs from the transient model utilises the modelled coal resource development pathway (CRDP) developed as part of this BA.

Within the operational constraints of the Bioregional Assessment Programme, it was not possible to use the GBH model in the stochastic analysis required for the probabilistic assessment of modelled groundwater change. A stochastic analysis includes ensuring numerical stability over the entire plausible range of parameter values and evaluating the model hundreds to thousands of times.

This review focuses on both local and regional-scale groundwater models developed to simulate the groundwater impacts of coal mining development in the Galilee subregion. The main goal of the review is to evaluate if any of the existing models can be used in their current form for the purpose of the BA numerical modelling or if they can be modified to suit this purpose. The requirements for BA numerical models are listed in companion submethodology M07 (as listed in Table 1) for groundwater modelling (Crosbie et al., 2016). These requirements do not only cover the horizontal and vertical extent of the model domain, but more importantly include stability criteria to ensure the model is suitable for stochastic analysis.

A secondary aim of the review is to provide an overview of the different conceptualisations and parameterisations of the groundwater system. This information, where suitable, will be used in the BA numerical modelling. In addition to that, the hydrological change predicted by these models will provide a frame of reference for comparison of the model results of the BA modelling.

Five groundwater numerical models have been prepared in the Galilee subregion to assess the potential for local to sub-regional hydrological changes associated with groundwater extraction by coal mines. Bleakley et al. (2014) undertook a review of five numerical groundwater models developed for proposed coal mines within the Galilee Basin. At the time that this report was prepared there were a number of proposed mines which had not yet advanced to the environmental impact statement (EIS) stage, and therefore had not yet developed groundwater models for the region surrounding their tenement. As mining projects progress it is likely that more data will become available and characterisation and calibration of groundwater models will improve.

The models reviewed by Bleakley et al. (2014) related to the Alpha, Carmichael, China First, Kevin’s Corner, and South Galilee coal projects. Subsequent to Bleakley et al. (2014), a draft EIS became available for the China Stone Coal Project, which is being developed by MacMines Austasia Pty Ltd (Hansen Bailey, 2015). As of November 2015, the list of proposed coal mining developments for which a numerical groundwater model exists is as follows:

Impacts on groundwater at Alpha and Kevin’s Corner have been considered in a single model investigating the cumulative impact to groundwater levels. The South Galilee model extent includes the China First Coal Project, and groundwater extraction for both the South Galilee Coal Project and China First Coal Project are included in the model. Kevin’s Corner and Alpha coal projects are also represented in the South Galilee model as boundary conditions. The Carmichael model considers only the impacts from the Carmichael Mine. The tenement boundaries and the extent of associated models are shown in Figure 6 and Bleakley et al. (2014). Table 5 summarises some basic features of the current groundwater models developed within the subregion.

A regional numerical groundwater model that encompasses the whole of the Galilee subregion has recently been developed as part of a joint project between the Queensland Government and Australian Government. The aim of this regional numerical groundwater model was to investigate groundwater flow systems in the Galilee subregion and estimate cumulative impacts from coal resource development. Further detail on the regional model is outlined in Turvey et al. (2015) and Table 5.

Table 5 Summary of available groundwater models within the Galilee subregion 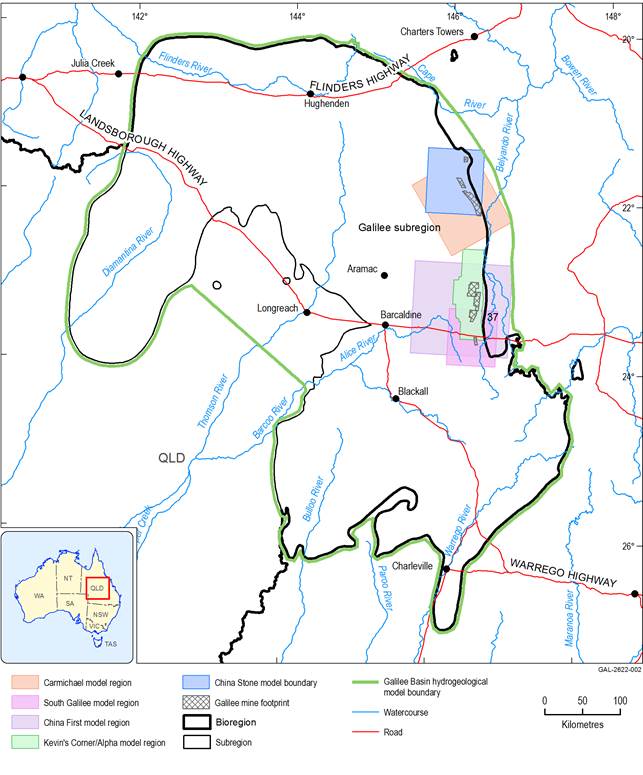