The Galilee subregion is host to three groundwater systems, which generally operate independently but in some places are hydraulically connected. The three systems in order from youngest to oldest are:

The edge of the Eromanga Basin coincides with the eastern outcrop extent of the Hutton Sandstone. Along this boundary, overburden thickness (strata lying above the upper Permian coal measures) is in the order of 400 to 600 m, in the vicinity of the southern CRDP mines, and reaches as much as 1000 m west of the northern CRDP mines (Figure 7 and Figure 8). 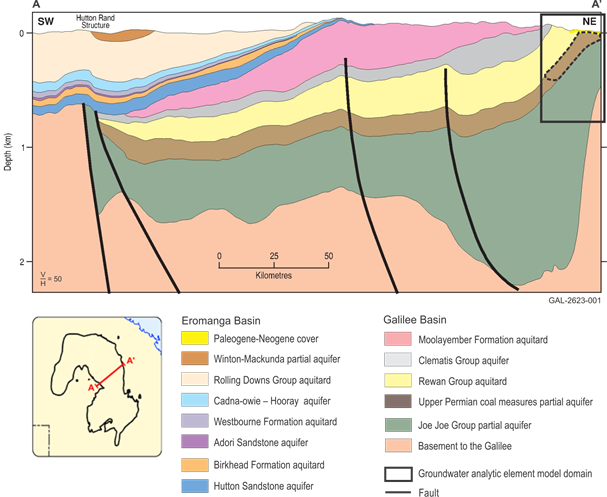 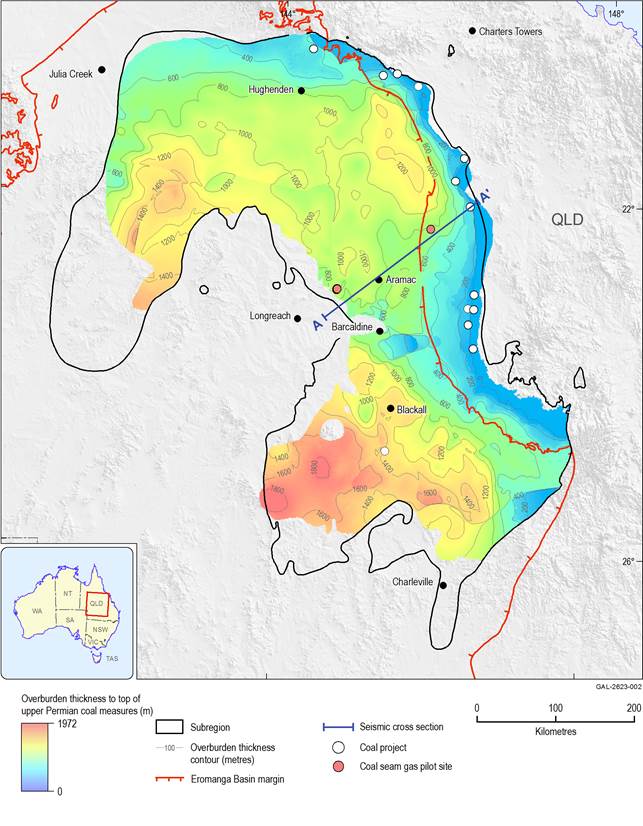 The upper sequence of the Galilee Basin groundwater system is the main focus of the groundwater model. The hydrogeology of the upper Galilee Basin is conceptualised as a series of alternating aquifers and aquitards, outcropping on the basin’s eastern boundary and gently dipping to the west. This sequence comprises the following aquifers, listed in order from youngest to oldest:

The aquifers of the Eromanga and Galilee basins are unconformably overlain by a thin veneer of Cenozoic deposits which comprise Quaternary alluvial deposits, associated with streams, and older Cenozoic sediments. In some cases, these directly overlie the upper Permian coal measures. The potentiometric surface of the Cenozoic aquifers indicates that these sediments comprise a local groundwater flow system with a strong relationship with the surface drainage system of the major rivers, such as the Belyando River (see companion product 2.1-2.2 for the Galilee subregion (Evans et al., 2018a)).

As outlined in Section 2.3.2.1 in companion product 2.3 for the Galilee subregion (Evans et al., 2018b), the majority of rivers in the Galilee subregion have prolonged periods of low flow. During wet periods, river flows and flooding may recharge the alluvial aquifers. Groundwater stored in these aquifers may return to river baseflow or, if at shallow enough levels, be used as a water source for vegetation in riparian zones and on floodplains in dry periods. Groundwater discharging to rivers can prolong river flow during periods of low rainfall. Eventually, however, once groundwater levels fall below the base of the river channel, baseflow will cease. 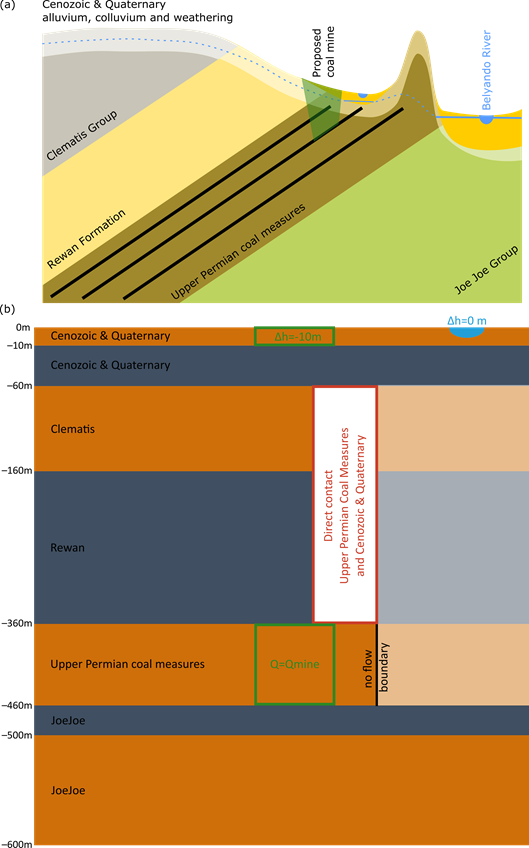 Figure 9 (a) hydrogeological conceptual cross-section, (b) corresponding cross-section of the groundwater analytic element model for the Galilee subregion

In (b) aquifers are in dark orange, aquitards in dark grey. Green colours indicate stresses related to coal mining. Blue indicates surface water groundwater interaction. Q is the mine dewatering pumping rate. Δh is the change in groundwater level.

In the GW AEM, the hydrostratigraphy is implemented as an alternating sequence of aquifers and aquitards of infinite extent, constant thickness and uniform hydraulic properties. The details of the hydrostratigraphy as implemented in the model are provided in Section 2.6.2.3.5 and Table 11. The Cenozoic and alluvial cover is conceptualised to consist of a basal zone of low-permeability sediments, representing the Cenozoic weathering that resulted in a kaolinised weathering profile (see Section 1.1.3.2.3 in companion product 1.1 (Evans et al., 2014)) and an upper zone of highly permeable sediments representing unconsolidated colluvial and alluvial sediments.