2.6.2.7.3 Design of experiment and sensitivity analysis

As outlined in the Section 2.6.2.1, the groundwater model is evaluated for a wide range of parameter combinations, called the design of experiment. The results of these model runs, the simulated equivalents to the observations described in Section 2.6.2.7.1 and the predictions described in Section 2.6.2.7.2, are used to train statistical emulators, which will replace the original model in the uncertainty analysis. The range of each parameter sample is therefore chosen to be very wide to ensure sufficient coverage of the parameter space. The design of experiment model runs also allow to carry out a comprehensive sensitivity analysis. Such an analysis provides insight in the functioning of the model, aids in identifying which parameters the predictions are most sensitive to and if the observations are able to constrain these parameters.

To limit and rationalise the dimensionality of the parameter space, not all parameters are included in the sensitivity analysis. The coefficients c and d in the depth – hydraulic conductivity relationship for layers 5 and 6 control the offset and slope of the relationship. While coefficients a and b modify the shape of the relationship, their effect on the resulting hydraulic conductivity is small compared to the slope and offset parameters. Parameters Kx_5_a, Kx_5_b, Kx_6_a and Kx_6_b are therefore excluded from the sensitivity and uncertainty analysis.

The pilot points used to spatially vary the riverbed conductance are included in the analysis. Their values are, however, all tied to parameter rp1. This has the effect that while the value at each of the pilot points changes during the sensitivity analysis, the spatial variability of the riverbed conductance will remain the same. Overall, 38 parameters are changed during the sensitivity and uncertainty analysis.

na = not applicable; Y = yes, included; N = no, not included; parameters are uniformly sampled over their transformed range

Table 8 also lists the transformation of each parameter and their range. Ten-thousand parameter combinations are generated for the entire parameter space for the model sequence (i.e. each parameter combination has parameter values for the groundwater model and the surface water model) using a maximin Latin Hypercube design (see Santner et al., 2003, p. 138). The maximin Latin Hypercube design is generated like a standard Latin Hypercube design, one design point at a time, but with each new point selected to maximise the minimum Euclidean distance between design points in the parameter space. Points in the design span the full range of parameter values in each dimension of the parameter space, but also avoid redundancy among points by maximising the Euclidean distance between two points (since nearby points are likely to have similar model output). The parameter ranges are sampled uniformly from their transformed range (Figure 28).

Within the available time frame and computational resources available, the modelling team was able to evaluate 3,877 out of the 10,000 parameter combinations generated. While the coverage of parameter space is limited with less than 4000 simulations, visual inspection of the successfully evaluated parameters showed that there was adequate coverage of all parameters and no bias or gaps in the sampling of the parameter hyperspace. Section 2.6.2.7.4 describes the development of the emulators with these model results. Part of developing the emulators is verifying that the sampling density is sufficient to train the emulators with an acceptable mismatch between simulated and emulated prediction values. 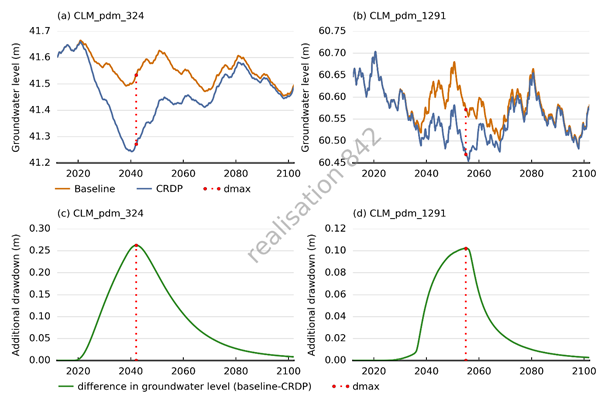 The following sections describe the sensitivity of the observations and predictions to the 38 parameters. The best appreciation of the relationship between a parameter and an observation or prediction is through the inspection of scatterplots. Although the large dimensionality of parameters, observations and predictions precludes this type of visualisation for all parameter–prediction combinations, a selected few scatterplots are provided as illustration. A comprehensive assessment of sensitivity will be provided through sensitivity indices. These indices, computed using the methodology outlined in Plischke et al. (2013), are a density rather than variance-based quantification of the change in a prediction or observation due to a change in a parameter value. It is a relative metric in which large values indicate high sensitivity, whereas low values indicate low sensitivity.

2.6.2.7.3.1 Simulated equivalents to observations from the design of experiment 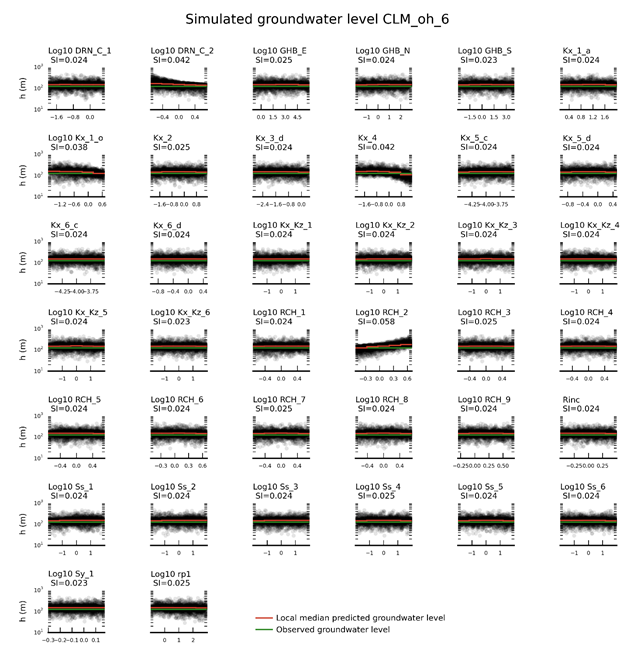 Out of the 38 parameters included in the design of experiment, 9 appear to have a noticeable effect on the simulated groundwater levels. These are:

The general-head boundary in the east controls the amount of water entering or leaving the system through the eastern boundary, while parameter rp1 controls the surface water – groundwater flux and thus the amount of water that can leave the system through the river system. As both of these boundary conditions are linear features in the landscape, only simulated groundwater levels close to these boundary conditions are likely to be sensitive to these parameters.

Figure 30b shows the sensitivity to the simulated average surface water – groundwater flux in September and October at the Casino surface water model node location (CLM_008). This prediction is mostly sensitive to the riverbed conductance (rp1), and to a lesser extent to the hydraulic conductivity in layer 1 (Kx_1_a and Kx_1_o) and recharge (RCH_1 and RCH_2). 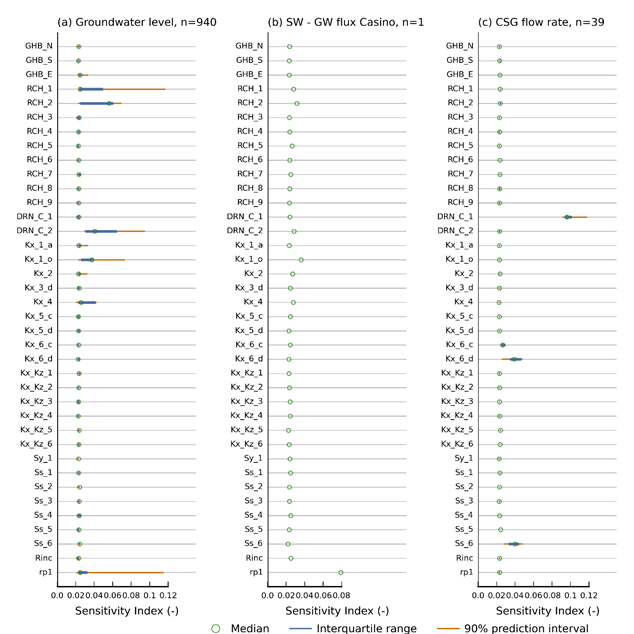 2.6.2.7.3.2 Simulated predictions from the design of experiment

Figure 31 shows, for the results of the evaluated design of experiment runs, how the predicted additional drawdown at model node pdm_1291 varies as a function of the parameter values. Note that additional drawdowns less than the head convergence criterion in the MODFLOW model, which was set to 0.001 m, are truncated to 0.001 m.

The parameters that have a sensitivity index in excess of 0.03 can be considered to have a major effect on the predicted drawdown, in the context of this particular prediction. These parameters are: 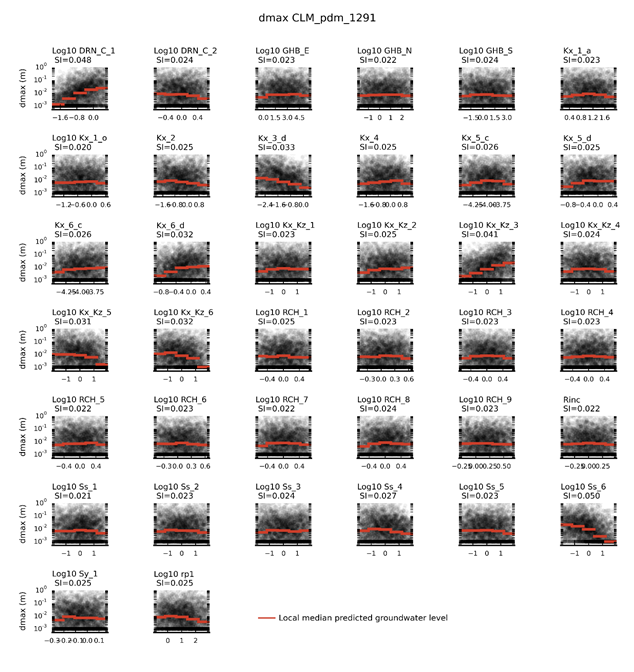 Figure 32 shows boxplots of the sensitivity indices for all parameter-prediction combinations. For the additional drawdowns in layers 1, 2, 3, 4 and 6 (Figure 32a to 30e) the same sets of parameters appear to be dominating the predicted drawdown as identified for model node pdm_1291. The most dominant parameter for all layers is the storage multiplier in the Walloon Coal Measures (Ss_6), while the horizontal hydraulic conductivity of the Walloon Coal Measures (Kx_6_d) is less important. The ratio of horizontal to vertical hydraulic conductivity controls the propagation of the cone of depression through the sedimentary sequence and most predictions are sensitive to these parameters. The drain conductance multiplier for the CSG drainage boundary (DRN_C_1) appears most important for predictions in layers 1 to 3 and less so for predictions in layers 4 and 6. This is most likely due to the fact that there are more model nodes close to the CSG well area in layers 1 to 3 than in layers 4 to 6. 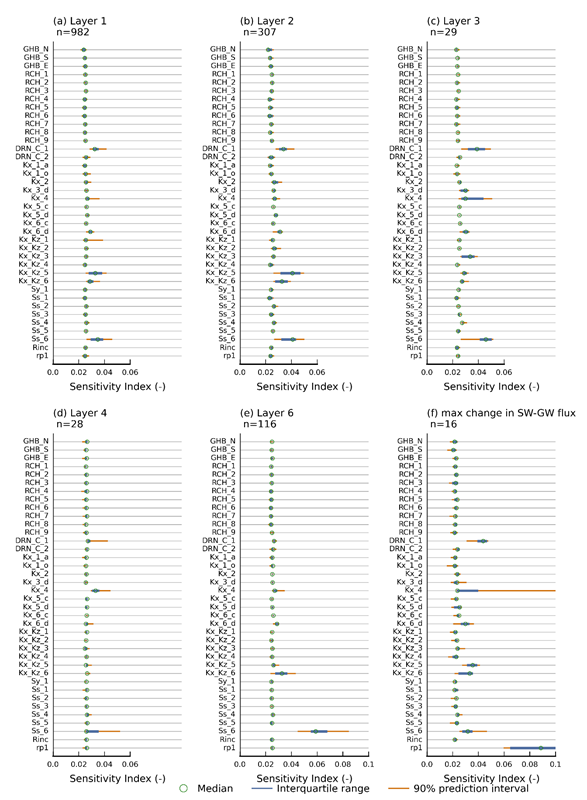 Figure 32 Boxplots of the sensitivity indices for each parameter to the predictions of additional drawdown at the model nodes in layers 1, 2, 3, 4 and 6 (plots (a) to (e)) and to the predicted maximum change in surface water - groundwater flux (SW-GW flux) (plot (f)) at the 16 river reaches that interact with the surface water model