The horizontal hydraulic conductivities were derived from existing pumping test records using the TGUESS approach (Bradbury and Rothschild, 1985); more details can be found in companion product 2.1-2.2 for the Clarence-Moreton bioregion (Raiber et al., 2016). Most of the original pumping records in the NSW state groundwater database (NSW Office of Water, Dataset 1) do not include a hydraulic conductivity value. The initial horizontal hydraulic conductivities for the top layer were interpolated from the 130 Kx estimates derived from the pumping test records found within the area covered by the model domain (Figure 18) (Bioregional Assessment Programme, Dataset 2). For bores with multiple records, an average value was used during the interpolation process. Table 5 provides a summary of Kx values for the various hydrogeological units. Note that most of the pumping tests were performed in the unconfined part of the aquifers, mostly in the alluvium and volcanics.

The initial horizontal hydraulic conductivities for the deeper layers were computed from Kx-depth relationships based on DST and pumping test data. Due to a lack of bedrock aquifer data in the Clarence-Moreton bioregion, relevant data were sourced from hydrogeological strata in the Surat Basin (Figure 19), where much more data are available. However, as the correlation between the sedimentary bedrock stratigraphic units above the Walloon Coal Measures in the Surat and Clarence-Moreton basins is poorly understood, it is not possible to directly use the hydraulic parameters from a particular unit in the Surat Basin to inform the hydraulic characteristics of a unit in the Clarence-Moreton Basin. Instead, all data from the BMO Group (consisting of the Bungil Formation, Mooga Sandstone and the Orallo Formation), the Gubberamunda Sandstone, the Westbourne Formation, and the Springbok Sandstone of the Surat Basin were combined (Figure 19). The resulting patterns of the hydraulic conductivity versus depth relationship were then used to inform parameter ranges that constrain the Kx of the Grafton Formation (model layer 2), the Bungawalbin Member (model layer 3) and the Kangaroo Creek Sandstone Member (model layer 4) in the Richmond river basin. Data from the Walloon Coal Measures in the Surat Basin (Figure 20) were used to constrain parameter variation in the Maclean Sandstone Member of the Walloon Coal Measures (model layer 5) and the lumped coal seams of the Walloon Coal Measures (model layer 6). 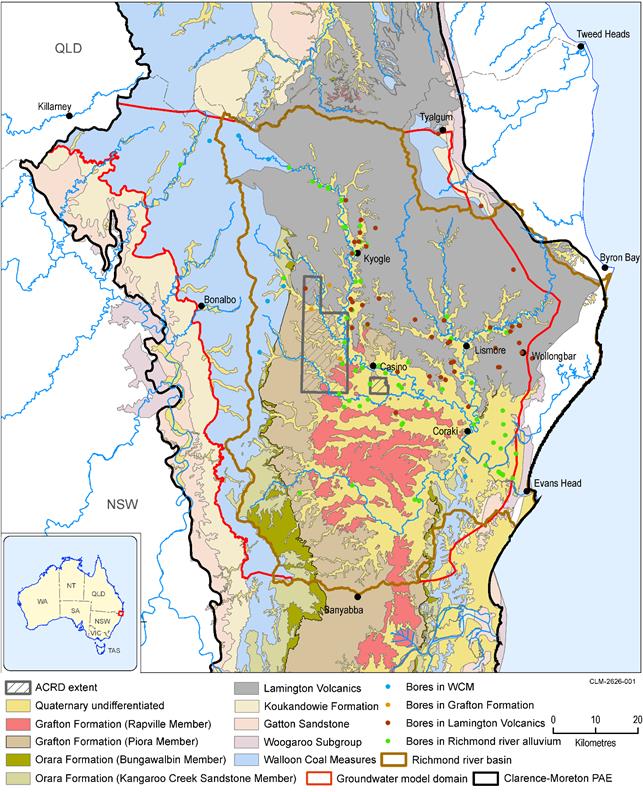 Porosity/permeability-depth relationships have been extensively studied within the petroleum industry (e.g. Magara, 1980; Nelson, 1994). Many studies have shown a linear or exponential decline in porosity down to depths of about 3 to 4 km, depending on rock compositions and geological settings. As hydraulic conductivity is generally correlated with porosity, it is deemed that a similar trend would exist between hydraulic conductivity and depth. Two different relationships were used depending on the available data. The following log(Kx)-depth linear relationship was implemented for layers 2, 3 and 4:

where h is depth, and m is the value of log(Kx) close to ground surface. For layers 5 and 6, the following exponential decay relationship was implemented:

where a, b, c and d are four coefficients that can be adjusted during sensitivity and uncertainty analysis with their initial values listed in Table 6. The adjustment of the parameters in the two log(Kx)-depth relationships are restricted by the boundary lines in Figure 19 and Figure 20, that is, the log(Kx)-depth lines are not allowed to move outside the boundary lines.

The horizontal anisotropy was assumed to be 1 across the entire model domain. The initial vertical anisotropy (Kz/Kx) (Kz: vertical hydraulic conductivity) was mostly assumed to be 0.1 with some exceptions. The value of 0.1 was used widely in previous studies in the coal seam gas (CSG) context and considered as to be conservative (Todd and Mays, 2005; USQ, 2011; Parsons Brinckerhoff, 2013). In areas where the geological units ‘pinch out’ (i.e. are interpreted to have negligible or zero thickness), a dummy thickness of 5 m was assumed due to limitations in the numerical MODFLOW model. Horizontal hydraulic properties were assigned from the adjacent underlying geological unit present in that area. The Kz/Kx ratio was set to 1000 to eliminate modelling artefacts in these dummy zones. The initial vertical anisotropy was scaled using a multiplier during sensitivity and uncertainty analysis (Table 6).

The previously mentioned hydraulic conductivity initial values were allowed to vary during the sensitivity and uncertainty analysis. The variation of Kx in layer 1 was achieved by changing two multipliers that correspond to the alluvial or non-alluvial units. For the other layers, the slopes and intercepts of the log(Kx)-depth (base 10) relationships were changed instead. Some extra constraints were also imposed on the parameter adjustment. For example, the Bungawalbin Member is expected to have a lower Kx than the overlying Grafton Formation and the underlying Kangaroo Creek Sandstone based on a few core samples and gamma log response (Doig and Stanmore, 2012), which means that the m-coefficient for the Bungawalbin Member must be lower than these other two units. Similarly, the Maclean Sandstone Member is also expected to have a permeability lower than the Walloon Coal Measures (Doig and Stanmore, 2012). Hence, the chosen parameter range is based on expert knowledge, local hydrogeological setting and results from a series of model stability tests (Table 6) (Bioregional Assessment Programme, Dataset 3). A minimum Kx of 1 x 10–6 m/day was applied to the entire model domain based on previous studies in the Surat Basin (USQ, 2011) and compilations of hydraulic properties in the literature (e.g. Freeze and Cherry, 1979; Batlle-Aguilar et al., 2016). 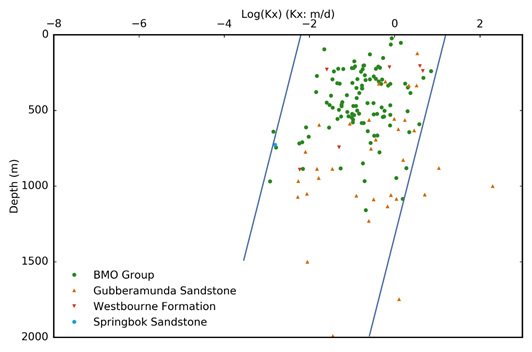 Figure 19 Hydraulic conductivity versus depth for BMO Group, Gubberamunda Sandstone, Westbourne Formation, and Springbok Sandstone within the Surat Basin, and boundary lines (the dark blue lines) of the log(Kx)-depth relationship for model layers 2, 3 and 4 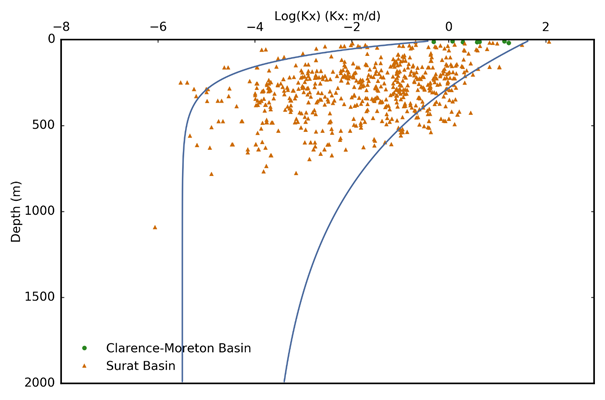 Figure 20 Hydraulic conductivity versus depth for the Walloon Coal Measures within the Clarence-Moreton Basin and the Surat Basin, and boundary lines (the dark blue) for the log(Kx)-depth relationship for model layers 5 and 6

*A multiplier is a dimensionless scalar to scale up/down parameters. For example, Kx_1_a is a multiplier for the alluvium Kx in layer 1 with a range from 0.1 to 2. This means that the alluvium Kx was varied in a range between 0.1 and 2 times of the initial alluvium Kx during sensitivity and uncertainty analysis.