The consequences of the changes to streamflow characteristics described in this product on landscape classes and water-dependent assets are considered in companion product 3-4 for the Hunter subregion (as listed in Table 2). In order to rule out water-dependent landscape classes and assets that are unlikely to be impacted by changes in surface water hydrology, it is necessary to define the magnitude of change in hydrology below which reaches of the stream network are assumed to experience no significant hydrological change due to the additional coal resource development. A threshold has been defined conservatively for each of the nine hydrological response variables in Section 8.1.4 of Viney (2016). For:

If results from the surface water modelling indicate that for all nine variables at a model node there is a less than a 5% probability the hydrological changes will exceed the thresholds, then landscape classes and assets that depend on streamflow at that location are very unlikely to be impacted due to the additional coal resource development.

Streams, predicted to experience changes that exceed these thresholds, will not necessarily be adversely impacted by these changes. Rather they are retained in the group of ‘potentially impacted’ streams for which more local information and analysis are needed to assess the implications of the changes on ecological, economic and sociocultural values. Thus these thresholds form the basis for defining the zone of potential hydrological change (see companion product 3-4), within which the potential for impacts cannot be ruled out.

ET = exceeds threshold; – indicates not significant (see Viney (2016) and start of this section for definitions)

In Section 2.1.4.2.5 of companion product 2.1-2.2 for the Hunter subregion (Herron et al., 2018a), the node to link mapping for the modelled Hunter River and Wyong River networks is defined. This mapping informs the extrapolation of results from model nodes to some length of reach upstream and downstream of the node, as appropriate to do so. The information in Table 11 and the node-link mapping in Section 2.1.4 of Herron et al. (2018a) have been used to identify the reaches of the Hunter blue line river network (Dataset 3) that have modelled hydrological changes from additional coal resource development. Figure 28 shows reaches predicted to experience a change in at least one hydrological response variable above its specified threshold due to additional coal resource development.

For some reaches (e.g. node 18 to node 19; node 55 to node 59), the change from an above threshold hydrological change to a non-significant hydrological change occurs somewhere between the two nodes. These reaches are shown as dashed pink lines and other information is needed to determine where to delineate the point of change. Similarly, upstream of the pink headwater model nodes in Figure 28 (i.e. those showing with a change exceeding a specified hydrological threshold), there will be some length of stream that is also potentially affected by the additional coal resource development. To define the zone of potential hydrological change for the impact and risk analysis – that is, the area outside of which it is very unlikely that landscape classes and assets will be impacted – we need to determine the upstream extents of the stream network likely to experience a hydrological change exceeding at least one specified threshold. This final step is reported in companion product 3-4 (impact and risk analysis) for the Hunter subregion (as listed in Table 2), where drawdown results from the groundwater modelling and mine footprint data are used to identify stream reaches that are not explicit in the surface water model node-link network and where hydrological changes from additional coal resource development could impact water-dependent landscapes and assets.

What these potential changes in hydrology from additional coal resource development might mean for Hunter subregion landscape classes and assets are covered in companion products 2.7 (receptor impact modelling) and 3-4 (impact and risk analysis) for the Hunter subregion (as listed in Table 2). 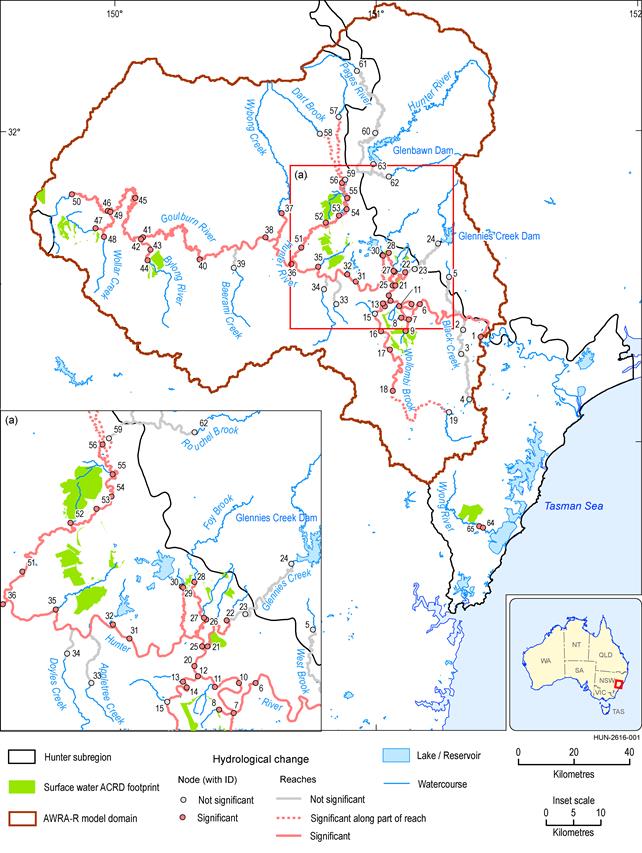