As of mid-2015, the baseline includes one existing coal mine (Jeebropilly Mine, west of Ipswich) and the coal resource development pathway (CRDP) includes the Jeebropilly Mine and one additional coal resource development for CSG (Metgasco Limited’s West Casino Gas Project). This CSG development is located in the Richmond river basin near Casino, NSW. As the baseline coal mine is far from the additional coal resource development, and there is no hydraulic connectivity between the Richmond and Bremer river basins, the conceptual hydrogeological model focuses on the geological, hydrogeological and hydrological characteristics of the Richmond river basin. The focus on this area is due to the presence of highly gas-saturated coal seams that have a relatively high permeability, which are located along the western side of the Casino Trough at depths as shallow as 250 m.

A recent decision by Metgasco (16 December 2015) to sell back their petroleum exploration licences (PELs) to the NSW Government, as well as withdraw their petroleum production lease application (PPLA), effectively means that future development of any CSG resources in the Clarence-Moreton bioregion is highly uncertain. However, as per companion submethodology M04 (as listed in Table 1) for developing a coal resource development pathway (Lewis, 2014), once the CRDP is determined, it is not changed for bioregional assessment (BA) purposes, even in cases such as this where Metgasco have discontinued their operations in the Clarence-Moreton bioregion.

The model sequence that was adopted to simulate the impacts of the CRDP is depicted in Figure 3. Figure 3 shows the relationship between the AWRA‑L surface water model and the groundwater model. The stage height time series that is derived from AWRA‑L drives the MODFLOW River package, and depending on the head differences and the streambed conductance, the river either loses water to, or gains water from, the alluvial aquifer.

The CRDP impacts on daily streamflow at each model node are estimated as the baseflow impact. The hydrological changes to baseflow are simulated using the numerical groundwater model, which is described in detail in Section 2.6.2.2.3 of companion product 2.6.2 for the Clarence‑Moreton bioregion (Cui et al., 2016). The numerical groundwater model estimates monthly baseflow for each model node under the baseline and CRDP. The difference between CRDP and baseline simulations is taken as the monthly hydrological changes in baseflow, which is then equally partitioned to obtain the daily changes. The technical details of the model conceptualisation, parameterisation and implementation, together with the uncertainty analysis of the simulated impacts, are documented in companion product 2.6.2 for the Clarence‑Moreton bioregion (Cui et al., 2016). 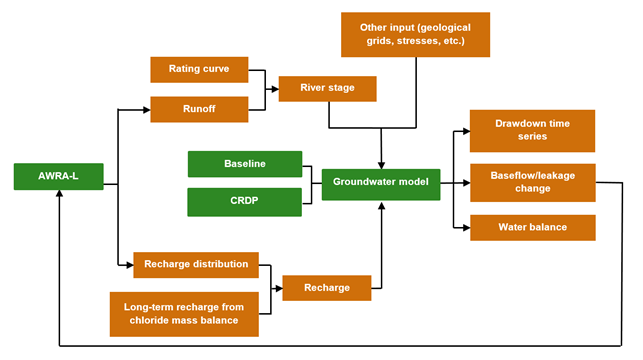 The low-streamflow hydrological response variables are:

The high-streamflow hydrological response variables are:

In addition, two hydrological response variables that represent streamflow volume and variability are: