Austar Coal Mine is an amalgamation of several older mines (Bellbird, Pelton-Ellalong, Southland) and operates within a number of mining leases (as shown in Figure 7) under 12 separate development consents issued by Cessnock City Council between 1974 and 2002 (Austar, 2015a, p. 1). Austar recommenced underground mining in the former Bellbird South Colliery in 2005 (Austar, 2015a, Table 2.1). Austar Coal Mine is now owned by Yancoal Australia Ltd who purchased the mine in December 2004 (Austar, 2015b), although the mine operated for over 100 years as the Pelton Colliery (Austar, 2015a; Yancoal, 2015a). Operations under Yancoal commenced in April 2005 (Austar Coal, 2015c), with a planned life of mine of 21 years (Umwelt, 2008). The mine is located 8 km south-west of Cessnock (Figure 6) in the Newcastle Coalfields (Yancoal, 2015b), and current operations involve deep underground longwall mining (Yancoal, 2015b). 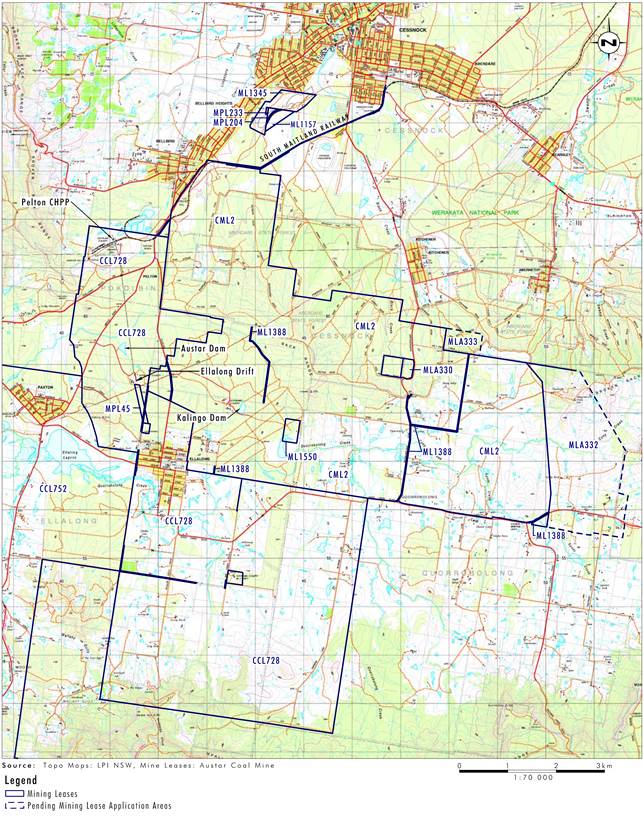 The mine has approved production of 3.6 Mt/year of ROM coal (Austar, 2015a), with total reserves of 50.9 Mt (Yancoal, 2015a) and total resources of 167 Mt (OZMIN database, 2015) (50.2 Mt of ROM coal (Umwelt, 2008)). Coal is extracted from the 7 m thick Greta Coal Measures (Umwelt, 2008) using modern longwall mining methods (Austar, 2015a). Coal from Austar Coal Mine is brought to the surface at the Ellalong Drift and Pit Top via an underground conveyor through the Ellalong East and South Headings. Coal is then conveyed to the Pelton CHPP via an overland conveyor system, where it is then processed and handled. Semi-hard coking coal and thermal coal products for international markets (Yancoal, 2015a) are then railed to the Port of Newcastle via the Austar Rail Line, the South Maitland Railway and the Main Northern Rail Line (Austar, 2015a, p. 6). Water management systems as part of the mining operation include drains, diversion banks, sedimentation, treatment and clean water dams, a lime treatment plant and a water treatment plant (Austar, 2015a).

Summary and download
1.2 Resource assessment for the Hunter subregion

Data register for product 1.2 Resource assessment for the Hunter subregion