The most recent phase of CSG exploration in the Galilee Basin started around 2007, spurred by renewed interest in CSG due to production successes in the nearby Surat and Bowen basins. Recognition of extensive and laterally continuous coal seams across much of the Galilee Basin, commonly with multiple stacked seams of over 20 m cumulative coal thickness, led many explorers to initially hail the basin as a potential major CSG province. Since 2008 there have been over 60 new CSG exploration wells drilled in the basin, and significant interest was shown through work programmes initiated by major petroleum companies including AGL and Origin Energy (through the Australia Pacific Liquefied Natural Gas (APLNG) joint venture). Many junior exploration companies have also been actively involved in the Galilee Basin, with prospective and contingent CSG resources recently announced by both Comet Ridge and Blue Energy Limited (Blue Energy) (see Table 3 in Section 1.2.1).

As of August 2014, the most advanced CSG exploration projects in the Galilee Basin (all with reported 2C and/or 3C contingent resources) are:

Other exploration work for CSG in the Galilee Basin has also recently been undertaken by:

The most advanced CSG project currently in the Galilee Basin occurs in EPP 529, and is a 50:50 joint venture operation between AGL (JV operators) and Galilee Energy Ltd. Known as the Galilee Gas Project, the main focus of activity is centred about 100 km north-east of Longreach (Figure 12), where exploration work has so far established a 259 PJ (2C) contingent CSG gas resource. This petroleum tenement was first granted to EEA in the early 1990s, and work since that time has involved expenditure of over $50 million (AGL, 2013) including:

An initial CSG pilot site with multiple wells was established in the early 2000s at Rodney Creek, about 5 km north-east of Glenaras, by Galilee Energy. The pilot site at Rodney Creek was based upon the earlier work of EEA, and targeted coal seams in both the Betts Creek beds and the underlying Aramac Coal Measures. However, despite drilling several wells and intersecting prospective coal seams, the pilot wells at Rodney Creek were largely unsuccessful and failed to produce commercial quantities of CSG. This was interpreted as due to fracture stimulation of the coals unintentionally penetrating into overlying aquifers, resulting in insufficient drawdown of the CSG reservoirs to reach desorption pressures (AGL, 2009). At the end of the test period these wells were plugged and abandoned.

Learning from the problems that beset the Rodney Creek pilot, AGL successfully established a five well production test site at Glenaras (Figure 17). Production test wells Glenaras 2 to Glenaras 6 were drilled in 2009, with a combination of hydraulic fracturing and under-reaming methods used to stimulate production. This development strategy helped to avoid the extensive fracturing of overlying aquifers that had earlier led to problems at Rodney Creek. The Glenaras wells were sited based on analysis of existing well and seismic data, and were drilled to intersect the Betts Creek beds and evaluate the gas and water flow potential of the main coal seams (AGL, 2009).

In October 2011 AGL reported the first successful gas flow from the Glenaras pilot site (from Glenaras 6 well), with a steady flow rate of 54 thousand standard cubic feet (Mscf) per day for four days, prior to maintenance shut-down (Alpha Securities, 2011). Successful gas flows from the Betts Creek beds at the Glenaras pilot site have proven the technical requirements for an operating CSG production field in the Galilee Basin. However, a commercial decision on the long-term viability of CSG production facilities at Glenaras is unlikely for at least eight to ten years, and will depend on both technical and commercial considerations (John Ross, AGL, 2014, pers. comm.). This reflects that further pilot testing of the target coal seams and evaluation of the economic implications of development is considered essential by AGL and Galilee Energy for Glenaras to be a successful CSG production site. Ongoing testing, monitoring and evaluation work is planned to continue at Glenaras in the interim, in-line with AGL’s currently approved operational timeframes and approvals. 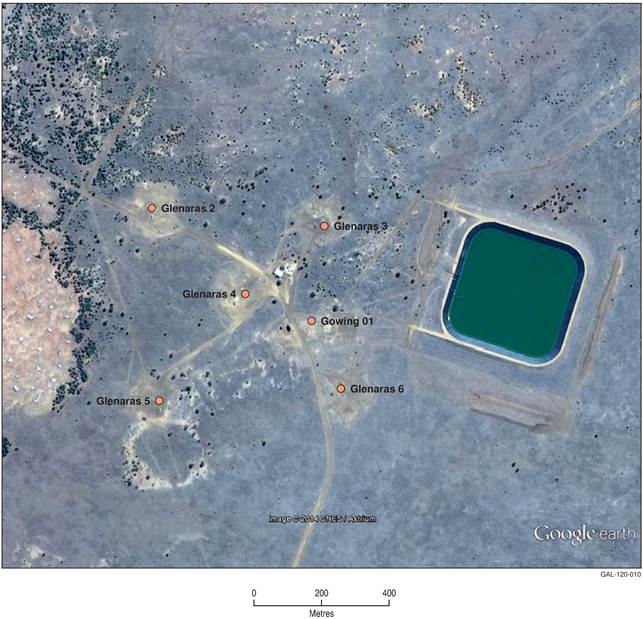 Comet Ridge currently holds two petroleum exploration tenements in the eastern Galilee Basin (EPP 734 and EPP 744), north-east of Aramac. CSG exploration across this area since 2009 has targeted the Betts Creek beds, and involved drilling eight wells and completing over 250 km of two dimensional seismic reflection surveys (Comet Ridge, 2013a). Results from this work identified the Gunn Project area in the south-west of EPP 744 as being the most prospective for CSG (Figure 12), and also led Comet Ridge to farm-in to neighbouring EPP 1015 (held by Queensland Energy Resources) in 2012 to create a continuous acreage area to the east of Gunn (Figure 18).

Within the Gunn Project area drilling has identified five discrete coal seams at depths ranging from 700 to 1000 metres below surface (Comet Ridge, 2013b). These are interpreted as part of the Betts Creek beds. Net cumulative coal thickness in most wells is greater than 16 m, with some wells containing up to 24 m of total coal. These coals have good permeability, and gas contents mostly greater than 4 m3/t (Comet Ridge, 2013a). Based on their initial understanding of the geology and CSG resources at Gunn, Comet Ridge (2013a) estimated that recoverable gas occurs over an area of 1865 km2 within their tenement and adjacent farm-in area.

In November 2012 Comet Ridge completed the Gunn 2 well to use for an extended production test, with the aims of: establishing connectivity with the coal seams, producing water from the coals, and obtaining water samples for further analysis (Comet Ridge, 2013a). A 4 m thick section of the C1 seam in the Betts Creek beds was isolated to connect the well with the target coals and allow for inflow of formation water (Comet Ridge, 2013a). Continuous pumping for over a month in early 2013 showed that the water rate progressively increased before stabilising at 400 barrels of water per day. Water quality was good, and analysis of pressure data indicated that a greater flow capacity was possible over the 4 m perforated interval (in this case, the flow rate had stabilised as the pump had reached its operational limits). Future operations at Gunn will aim to establish a pilot production scheme to convert the current resources to a CSG reserve (Comet Ridge, 2013a). In addition, a new appraisal well (Harrington 1) was spudded (i.e. drilling began) in mid-May 2014 approximately 24 km to the north-east of Gunn 2 (in EPP 1015), to further evaluate the CSG potential of the Betts Creek beds in this area. The Harrington 1 well was cased and suspended in June 2014 after reaching a total depth of 1042 m and intersecting 19 m of net coal (Comet Ridge, 2014). Comet Ridge reported that gas was observed bubbling from the core when it was brought to surface.

Comet Ridge considers that the Galilee Basin continues to hold the greatest upside potential within their existing exploration portfolio (Comet Ridge, 2013b). Preliminary consideration of potential commercial options (all of which would require building new pipelines and associated infrastructure) for gas supplies extracted from the Gunn Project area includes: 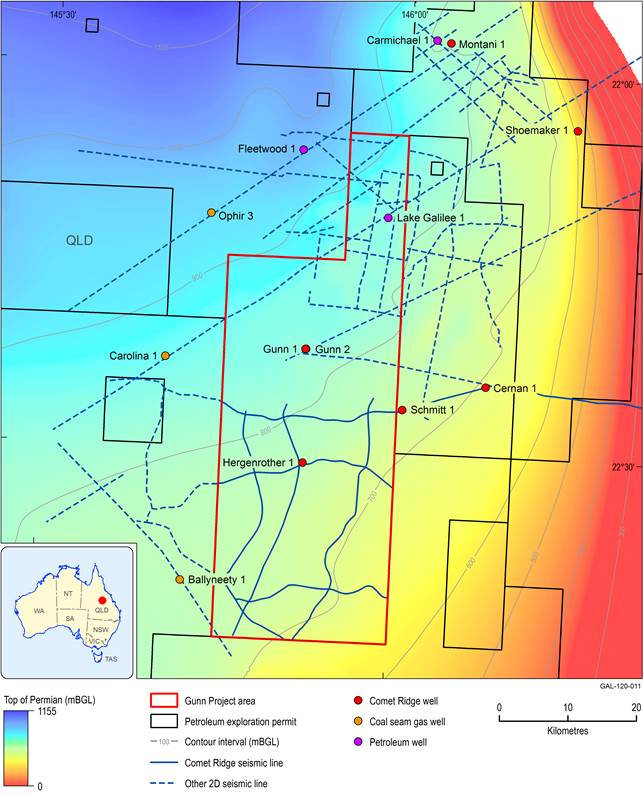 Petroleum exploration and development company Blue Energy hold EPP 813 in the central Galilee Basin, adjoining the prospective Comet Ridge tenements to the east and the Galilee Gas Project to the west. Initial results from the Carolina 1 well in 2008 led to an expanded programme of drilling four exploration wells in 2009 and 2010, and this work has resulted in an estimated 554 PJ contingent resource (3C) and a 1142 PJ prospective resource (Alpha Securities, 2011). Net coal intersections are thickest in the western part of the tenement (such as the 26.7 m total coal intersected in well Kanaka 1), as the basal Aramac Coal Measures do not occur in the eastern parts of the tenement. Analyses of coal samples have shown moderate gas contents of 3 to 6 m3/t (DAF).

Blue Energy reported that the drilling of most of their exploration wells in EPP 813 proved difficult due to water-saturated sandstone aquifers that are in direct hydraulic contact with the target coal seams (Blue Energy, 2009). This meant that very large volumes of water were produced during the drilling process, severely hampering drilling efficiency. The permeability of target coal seams was also shown to be relatively low (0.5 to 5 md), and Blue Energy has suggested that horizontal drilling along coal seams would be the most productive well completion technique for future CSG operations (Blue Energy, 2013).

Alpha Securities (2011) undertook a commercial review of Blue Energy and suggested that, to further add to the CSG resource in EPP 813, Blue Energy should undertake a new phase of exploration well drilling. This should involve new coring to expand the gas resource base, and assist in locating a preferred site for future pilot production testing. Furthermore, Blue Energy (2009) have readily acknowledged the existing challenges of establishing commercial CSG flow rates in the Galilee Basin, and suggested that the most prospective areas may be where coals have been additionally ‘charged’ by a conventional petroleum system. The likelihood of identifying such areas (if they exist) is unknown.

The timing and scope of future work in EPP 813 is unclear, as most of Blue Energy’s recent focus appears to be on their CSG plays in the Bowen Basin (Blue Energy, 2013). They also hold significant tenement position in other proven and potentially productive unconventional hydrocarbon basins in eastern and central Australia, such as the Cooper, Surat, Maryborough and Carpentaria basins.

In contrast to successful CSG production pilots for AGL and Comet Ridge, several companies have recently decided to slow or discontinue their CSG exploration work and relinquish tenements in the Galilee Basin. Notable among these is Exoma Energy Limited (Exoma Energy) who (in JV partnership with the China National Offshore Oil Corporation (CNOOC) Galilee Gas Company Pty Ltd) undertook an extensive exploration campaign involving drilling and sampling of 19 exploration wells across multiple tenements in the northern and central Galilee Basin (Exoma Energy, 2013). In their 2013 annual company report Exoma Energy recognised that the geological conditions in their tenements were unlikely to favour supporting large scale CSG development. In particular, most coal seams that Exoma Energy had investigated were shown to be in direct hydraulic connection with extensive permeable sandstone aquifers (Exoma Energy, 2013). Consequently, gas content within most coal seams is relatively low (as gas has dispersed into the connected and more permeable sandstone aquifers), and unlikely to be suitable for large scale commercialisation.

In addition to the technical challenges of finding coal seams with sufficient gas content, one of the fundamental long-term challenges that confronts any commercial CSG operation in the Galilee Basin remains the lack of existing gas infrastructure to provide pipelines to market (Alpha Securities, 2011). There may also be short- to medium-term problems in some areas in managing the overlap between resource tenements for coal mining, petroleum development, and possibly geothermal or carbon sequestration activities.

The infrastructure issues for CSG are similar to those faced by the coal mining industry in the basin, although planning for coal infrastructure development is considerably more progressed at this time. It is likely that the next decade will see continued focus on further exploration and appraisal work aimed at better understanding the geology and resource characteristics of CSG in the Galilee Basin. There is also likely to be an emphasis on converting existing contingent resources into proven and probable reserves (2P), for example, at relatively advanced testing sites such as Glenaras and Gunn. Given that much of the Galilee Basin remains relatively poorly explored for CSG to date, further exploration successes, and potentially new CSG field discoveries, remain a distinct possibility in coming years. This eventually may lead to commercial CSG production operations starting in the Galilee Basin, although the magnitude and location of any such areas (at least beyond those previously discussed in this report) is currently uncertain based on the limitations of existing data and information.