Waratah Coal proposes to develop a large scale greenfield coal mining operation in the Galilee Basin called the China First Coal Project (previously known as the Galilee Coal Project – Northern Export Facility). Waratah Coal is a privately owned Australian coal exploration and development company seeking to mine coal resources in the Galilee Basin for export to markets in China. In addition to the proposed open-cut and underground mining operations and supporting infrastructure (Figure 14) the project also includes building a new 453 km long rail network to link the mine with the coal export facility at Abbott Point. The estimated capital expenditure for this combined development is $6.5 billion, with $4 billion for the mine and $2.5 billion for the railway (Waratah Coal, 2011). The mine-site will be built about 30 km north-west of the town of Alpha, and 120 km east of Barcaldine (Figure 12), close to the eastern boundary of the Galilee Basin. 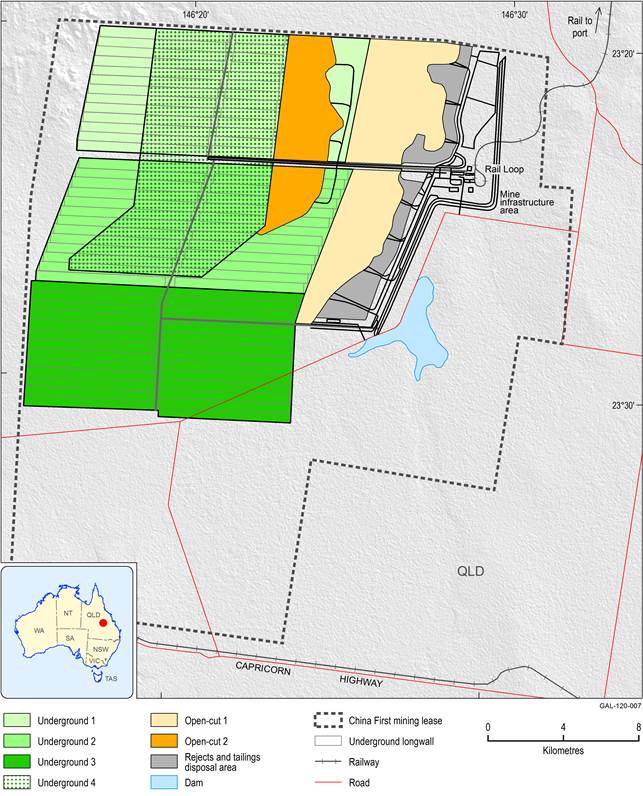 The China First Coal Project aims to mine approximately 1.4 Gt of raw coal within an area covered by mining lease application (MLA) 70454. This lease occurs within existing Waratah Coal exploration tenements, EPC 1040 and EPC 1079. The mine design is based around a 25 to 30 year life that includes two open-cut pits, each with a northern and southern mining area (Figure 14). The pits are expected to operate at peak annual production rates of 10 Mt. In addition, four underground longwall operations are planned to produce up to nine Mt per year of raw coal. Once all components of the mining operation are at peak capacity, the total annual production rate will be 56 Mt of run of mine (ROM) coal, which equates to 40 Mt of saleable processed coal for export (Waratah Coal, 2013a). The ROM coal will be washed and processed in one of two coal handling and processing plants (CHPP) that will be built on-site in the mine infrastructure area.

The identified resources at China First Coal Project amount to 3.68 Gt of high volatile sub-bituminous coal (resources have been estimated by a Competent Person as defined by the JORC Code) (Waratah Coal, 2011). They are perhydrous coals (>6% hydrogen) with low ash and sulfur contents, and are suitable as a thermal coal product, for example, to use in coal-fired power stations. Typical of the central-eastern margin of the Galilee Basin, the coal resources at China First Coal Project are hosted in the Late Permian rocks of the Bandanna Formation and the Colinlea Sandstone. Previous exploration work has identified six main coal seams, sequentially named from A (uppermost) through to F (lowermost) as per the standard naming convention of Late Permian coals in the Galilee Basin (Scott et al., 1995). The seams have good lateral continuity throughout the tenement and dip at low angles (1 to 2°) towards the west. No significant structural disruption of the main coal seams has been identified in the area.

According to Waratah Coal (2011), key features of the coal seams in the China First Coal Project area are:

Within the project area the coal seams are overlain by Cenozoic overburden, typically 95 to 125 m thick. These sediments are generally thinner in the north-west of the MLA (commonly 20 m or less) and thickest in the south (around 100 m thick), and consist of a mixed package of sand, gravel and clay. In the eastern part of the project area the Cenozoic sediments are in direct unconformable contact with the Permian strata. In contrast, the distinctive green-grey Triassic siltstone and mudstone of the Rewan Group occurs below the Cenozoic sediments in the west of the MLA, overlying older Permian rocks (Waratah Coal, 2011). Where present, the stratigraphic contact between rocks of the Rewan Group and the underlying Permian units is 20 to 40 m above the uppermost coal seam (A seam). Development of the open-cut operations will thus require stripping of a significant amount of waste rock overburden.

The open-cut operations will use a combination of conventional mining techniques such as walking draglines to remove overburden, and a truck and shovel fleet for coal recovery and partings removal from pits (Waratah Coal, 2013a). To improve productivity and allow greater flexibility when stripping overburden, large electric rope shovels will be used to load in-pit overburden conveyors.

The four longwall mines will access the underground coal resource at depths of 120 m below ground surface, with three longwalls targeting the C and D coal seams and one mining the B seam. Conventional longwall operations will use a coal shearer to cut coal away from the face, and a face conveyor running the length of the development face to carry the coal onto a belt conveyor system that transports coal out of the underground workings. Longwall blocks are expected to be up to 7 km long, and will have a 450 m wide operating face. Extraction heights at each face are likely to vary depending on individual seam characteristics, mostly between 1.8 to 2.5 m.

The China First Coal Project will have two purpose-built coal handling and preparation plants (CHPP) in the east of the MLA near the initial open-cut pits (Figure 14). These plants will have a raw washing capacity of 28 Mt/year. The overall product yield is estimated at 72% following washing. The CHPP will operate using conventional wet beneficiation processes that are widely used in the Australian coal industry (Waratah Coal, 2013a). Tailings from the CHPP will be stored in the nearby tailings storage facility, using either traditional co-disposal system or filter press system (requiring greater capital investment).

Other components of the mining operations will include:

The development of a dedicated railway is an important component of the China First Coal Project. Waratah Coal proposes to build a new 453 km long rail network to link the mine with the coal export facility at Abbott Point (Waratah Coal, 2011). The rail system has been designed to support 25,000 tonne payload trains using a modern, heavy haulage standard gauge line. The initial annual transport capacity will be 60 Mt, although Waratah has sought approval for the railway to eventually cater for 400 Mt of coal transport per year. This indicates that additional rail contracts may be sought in the future from other proposed developments in the Galilee Basin. The rail design will include six passing loops and will have a mean easement width of about 50 m, with a maximum width of 184 m in areas where cross-slope cuttings are needed (Waratah Coal, 2013a).

The China First Coal Project proposal, comprising the mine and rail components, received conditional approval to proceed to development from the Queensland Coordinator-General in August 2013. Subsequent approval under the EPBC Act was granted by the Australian Government in December 2013. The approval is subject to a range of development and operating conditions, particularly around potential impacts to groundwater resources in the Great Artesian Basin and the reduction of ecological integrity and conservation value associated with land clearing and open-cut mining in the Bimblebox Nature Reserve.

Information recently released by the Queensland Government indicates that mining of the China First Coal Project may start in 2017. This suggests that construction activities may begin in 2015 or 2016, although this will depend on the timing of granting for the project’s proposed mining lease (MLA 70454) and environmental authority (EA), and ongoing assessment of the economic viability of the project (for example, in light of changes to coal prices and overall market conditions). However, the Queensland Government’s preference for the rail corridor proposed by GVK-Hancock to service the southern Galilee Basin (as well as the Adani Mining rail proposal for the central Galilee Basin) (Queensland Government, 2012), indicates that it is currently uncertain if Waratah Coal’s proposed rail network (as outlined above for the China First Coal Project) will be developed as originally specified.