As of August 2014 there are no commercially operating coal mines or coal seam gas (CSG) production facilities within the geological Galilee Basin. Approximately 33% of the basin is covered by exploration permits for coal (EPCs), with 154 EPCs granted and eight EPC applications either wholly or partially located within the boundaries of the Galilee subregion. Most of these tenements occur within an arcuate zone that runs parallel to the basin margin, forming a contiguous block of tenements from north-west of Hughenden along the eastern basin boundary to the Springsure Shelf (south-east Galilee Basin). This zone of exploration coincides with areas in which the Late Permian coal-bearing strata are buried at relatively shallow (mineable) depths. There are 44 companies that hold title to EPCs (either directly or through subsidiary companies), with the main tenement holders being Waratah Coal Pty Ltd (Waratah Coal), Coalbank Ltd (Coalbank), Guildford Coal Ltd (Guildford Coal), Cockatoo Coal Ltd (Cockatoo Coal) and Fox Resources Ltd (Fox Resources).

Over 54% of the Galilee Basin is covered by exploration permits for petroleum (EPPs), most of which have been awarded for coal seam gas (CSG) exploration. As of August 2014, there are 23 different EPPs that are either wholly or partially within the subregion, and these are mostly concentrated over the basin’s main depocentres such as the Koburra Trough, Aramac Trough and Lovelle Depression. A further 30 EPP applications have been lodged, although many of these will not be awarded (unsuccessful bids). There are 13 companies that hold title to petroleum exploration tenements in the Galilee Basin. The main CSG explorers are AGL Energy Ltd (AGL), Comet Ridge Ltd (Comet Ridge), Blue Energy Ltd (Blue Energy) and Galilee Energy Ltd (Galilee Energy).

Outcropping coal seams were first noted in the north-eastern geological Galilee Basin more than 100 years ago (Scott et al., 1995). However, due to its relative isolation and lack of existing infrastructure, there have never been any commercial coal mining operations or coal seam gas (CSG) production in the Galilee Basin. There is currently one petroleum production licence within the boundaries of the Galilee subregion (Petroleum Lease 65 held by Australian Gasfields Ltd for the Gilmore Gasfield), but this operation extracts gas from a conventional hydrocarbon reservoir within the Devonian aged Adavale Basin (which stratigraphically underlies the Galilee Basin). As Gilmore is not CSG-related, it is not discussed in this report.

In recent years, a number of significant new coal mining developments have been proposed on the eastern and north-eastern margins of the basin. A small-scale test pit at the Alpha Coal Project (Figure 8) successfully mined 125,000 tonnes of run-of-mine (ROM) coal in 2012, primarily to validate engineering design parameters and obtain bulk samples for analysis (Mulder, 2012). Further details of the proposed Alpha Coal Mine, and other advanced coal developments, are in section 1.2.3 of this report. 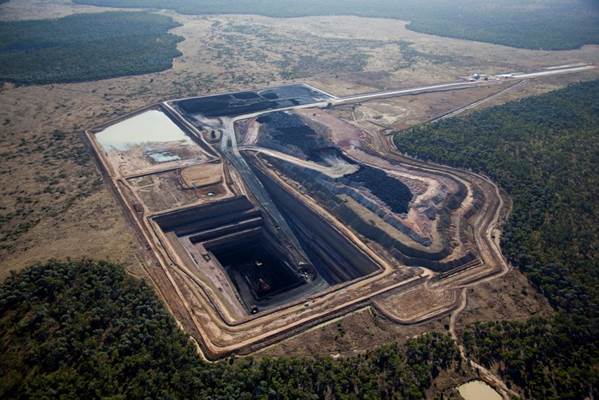 Source: Mulder (2012). Image is from a public presentation and is used here with permission of GVK Resources

Coals of the Betts Creek beds were briefly mined on a trial basis by Mt Isa Mines (MIM) at Oxley Creek (near Hughenden) in the late 1940s (Carter, 1948). This followed earlier geological reconnaissance work that recognised outcropping coal seams in several creeks to the north of Hughenden, and were subsequently tested by core drilling. The trial mining operations consisted of a 30° inclined shaft sunk to a depth of about 75 m, at which point an approximately 2.5 m thick coal seam was intersected. An 80 m long drive was then dug to follow the coal seam, which was essentially flat-lying and of constant thickness along the entire length of the drive (Carter, 1948).

Coals recovered from the drive were mostly of dull appearance, with conchoidal fractures and some small seams of lustrous black coal (Carter, 1948). Analyses of coals sampled from the drive indicated relatively high ash content, and an average 1.8% sulfur. Further testing of the coal led MIM to consider the prospect uneconomic due to the inherently high ash content, and no further development work was undertaken. Carter (1948) reported that two of the surface coal dumps from the exploratory drive spontaneously combusted and burnt for almost three weeks.