The consequences of the changes to streamflow characteristics on landscape classes and water-dependent assets are considered in companion product 3-4 (impact and risk analysis) for the Namoi subregion (as listed in Table 2). In order to rule out surface water dependent landscape classes and assets that are unlikely to be impacted by changes in surface water hydrology, it is necessary to define a threshold, above which changes in hydrology will be considered further, and which reaches of the stream network are and are not showing this hydrological change. Specified thresholds of hydrological change are provided for each of the nine hydrological response variables in Section 8.1.4 of companion submethodology M06 (as listed in Table 1) for surface water modelling (Viney, 2016):

Table 13 summarises the hydrological changes due to the additional coal resource development for each of the surface water modelling nodes in the Namoi subregion for each hydrological response variable that exceed the specified thresholds.

Figure 27 shows reaches predicted to experience a change in at least one hydrological response variable that exceeds the specified threshold due to additional coal resource development. 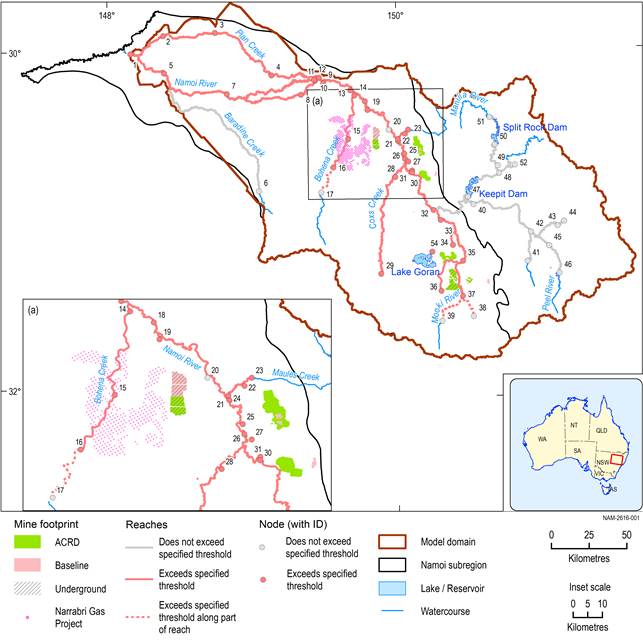 For some reaches (e.g. those below nodes 38 and 39 but above node 37), hydrological change can change from exceeding specified thresholds to not exceeding these thresholds between the two nodes. These reaches are shown as dashed pink lines and other information is needed to delineate the change on these reaches. Similarly, upstream of the headwater nodes exceeding the threshold change in hydrology, there will be some length of stream that is also potentially affected by coal resource development.

To define the zone of potential hydrological change for the impact and risk analysis – that is, the area outside of which it is very unlikely that landscape classes and assets will be impacted – we need to determine the upstream extents of the stream network likely to experience hydrological changes that exceed the threshold. This final step is reported in companion product 3-4 (impact and risk analysis) for the Namoi subregion (as listed in Table 2), where drawdown results from the groundwater modelling and mine footprint data are used to identify stream reaches that are not explicit in the surface water node-link network and where hydrological changes from additional coal resource development are likely to exceed specified thresholds.