Data needed for calibration of the Australian Water Resources Assessment (AWRA) landscape model (AWRA-L) include climate data and streamflow. The calibration period used for AWRA-L model development is from 1983 to 2012, which includes both wet and dry periods.

AWRA-L is run using gridded data of maximum temperature, minimum temperature, incoming solar radiation and precipitation. Daily grids (cell resolution of 0.05 x 0.05 degrees; ~5 x 5 km) of these variables are generated for the Australian continent by the Bureau of Meteorology (Dataset 1). Details of this dataset are provided in Section 2.1.1 of companion product 2.1-2.2 for the Namoi subregion (Aryal et al., 2018).

Daily stage and streamflow data from 11 streamflow gauging stations with unregulated catchments located in and near the Namoi subregion were used to calibrate AWRA-L. These gauging stations and the catchment boundaries are shown in Figure 8. Of the 11 stations, six are located within the modelling domain (Section 2.6.1.3) and five are located in the adjacent basins. Site details are summarised in Section 2.1.4 of companion product 2.1-2.2 for the Namoi subregion (Aryal et al., 2018). Observed daily mean streamflow data for the above gauges for 1983 to 2012 were obtained from the NSW Office of Water (Dataset 3).

Criteria for selecting the calibration catchments include that they: 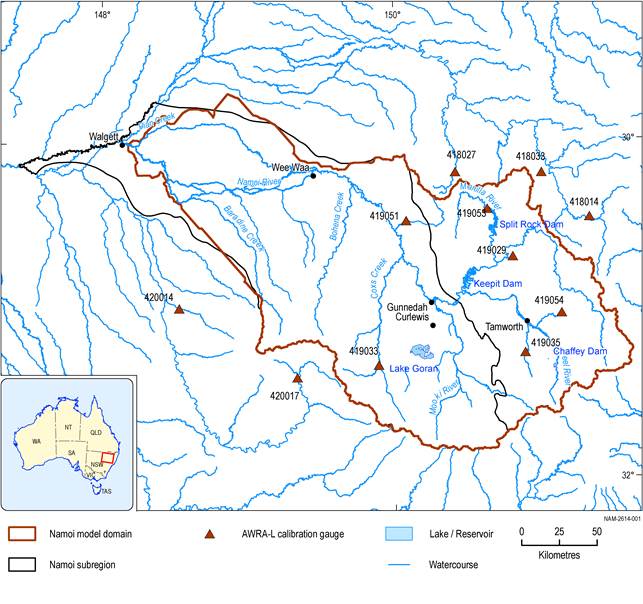 Figure 9 and Table 7 summarise results of the two model calibrations for the 11 calibration catchments in terms of the three performance metrics. The high-streamflow calibration yields a reasonable Nash–Sutcliffe efficiency of daily streamflow, indicated by a median Ed(1.0) of 0.59 and 25th and 75th percentile values of 0.54 to 0.65, respectively. Overall model bias is low with a median bias of 0.04, but the interquartile range from negative to positive values indicates variability across the 11 catchments with considerable overestimation in some catchments. The high-streamflow calibration yields a median F1 of 0.66. The Ed(1.0) value is greater than 0.3 for 9 of the 11 catchments, with negative values (suggesting poor simulation) for one catchment: –0.73 at gauging station 419029 on Halls Creek (tributary of the Namoi River), with a prediction bias of 0.65.

The 11 calibration catchments cover a wide range of climate and topographic conditions, with mean annual streamflow ranging from 11.2 GL/year at catchment 418033 (Bakers Creek at Bundarra) to 50.7 GL/year at catchment 420017 (Castlereagh River at Hidden Valley) (Table 7). This suggests that AWRA-L can predict streamflow variability reasonably in the Namoi subregion where climate conditions vary widely. 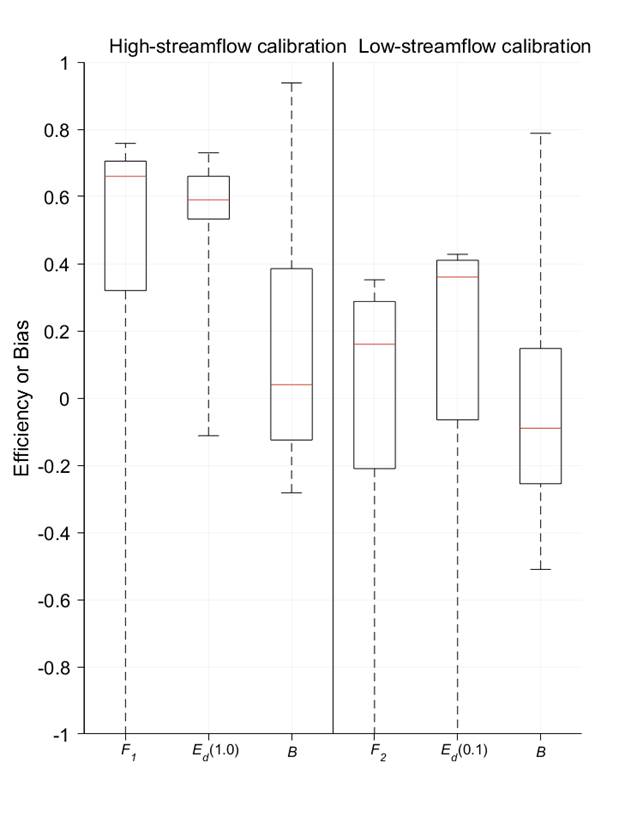 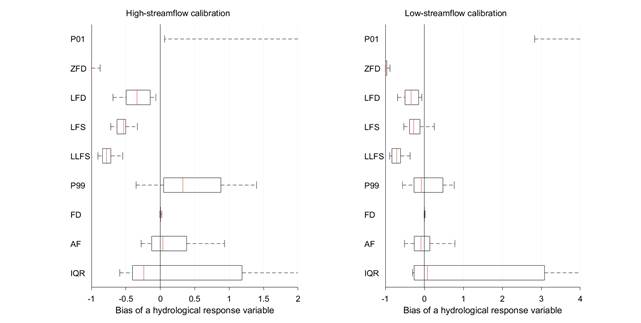 In each boxplot, the left, middle and right of the box are the 25th, 50th and 75th percentiles, and the left and right whiskers are the 10th and 90th percentiles.

Shortened forms of hydrological response variables are defined in Table 8.

It is noted that the parameter sets consisting of a single value for each parameter obtained from the regional model calibrations are not applied directly to the simulation and uncertainty analysis. However, the 3000 stochastic parameter sets used in simulation are drawn from distributions that are biased towards the values obtained in the two calibrations. The calibration parameter sets are also taken as reference values to evaluate performance of the best 10% of parameter sets (i.e. 300 model runs) selected for each hydrological response variable.

Results from the regional model calibrations (Table 7 and Figure 9) suggest that AWRA-L performs reasonably well in estimating high streamflow and low streamflow in the Namoi subregion.

It is noted that when the model is calibrated against observations from 11 streamflow gauges it does not generate a uniform model performance. Though the model performs well overall, it performs poorly in some catchments and does not estimate the suite of hydrological response variables equally effectively. Both the high-streamflow and low-streamflow model calibrations generate a poor overall model performance for gauge 419029 (Halls Creek) and gauge 420014 (Magometon Creek), both with Ed(1.0) lower than zero and large absolute biases (Table 7). Gauge 419029 has the largest percentage of daily streamflow data tagged as unverified implying a less reliable data. Gauge 419051 (Maules Creek) lies on the subregion boundary with the Hunter-Mooki Thrust Fault System passing through its catchment (Figure 8). This fault-line may be interfering with the surface flow, causing leakage through it which may result in the model highly over estimating streamflow in both calibrations. Note that distribution of observed runoff coefficients showed that the median runoff coefficient of gauge 419051 lies close to the 10th percentile indicating a comparatively very low runoff coefficient. Also, the annual runoff depth of gauge 419051 is much less than nearby gauges, especially 418027 (Table 7).

A key characteristic of a regional model calibration approach (i.e. a single simultaneous calibration against observations from multiple catchments) is that, unlike with local calibration (i.e. separate calibration for each individual catchment), there is little degradation from model calibration to model prediction (Viney et al., 2014). Except for the gauges discussed above which are affected by data quality or geography, the biases at the majority of individual stream gauging sites are in the range of –30% to +40%. Given the regionalisation methodology applied here, it is reasonable to assume that prediction biases in ungauged parts of the subregion will be similar. This provides confidence when applying AWRA-L to each model node where there are no streamflow observations.