This section presents information on surface water licences and allocations in the Cooper subregion (both SA and Queensland). Detailed water accounts are not required here because water balance modelling will not be undertaken for the Cooper subregion in this iteration of the Bioregional Assessment Technical Programme.

The Cooper Creek is the only major waterway in the Cooper subregion and receives water via the Thomson River from monsoonal rainfall to the north and via the Barcoo River from monsoonal and easterly rain systems to the east (Figure 3). The Cooper surface water system includes an extensive floodplain that dominates the basin south of Windorah and divides into two distinct parts near the Queensland–SA border. The Cooper Creek is an intermittent river, with parts of the river in Queensland exhibiting a seasonal character. Its tributaries are either intermittent or ephemeral (Jaensch, 2009). There are potential coal and coal seam gas resources in the headwater catchments of the Cooper creek basin within the Galilee subregion, which may impact water accounts in the Cooper subregion (Evans et al., 2015; Lewis et al., 2014). 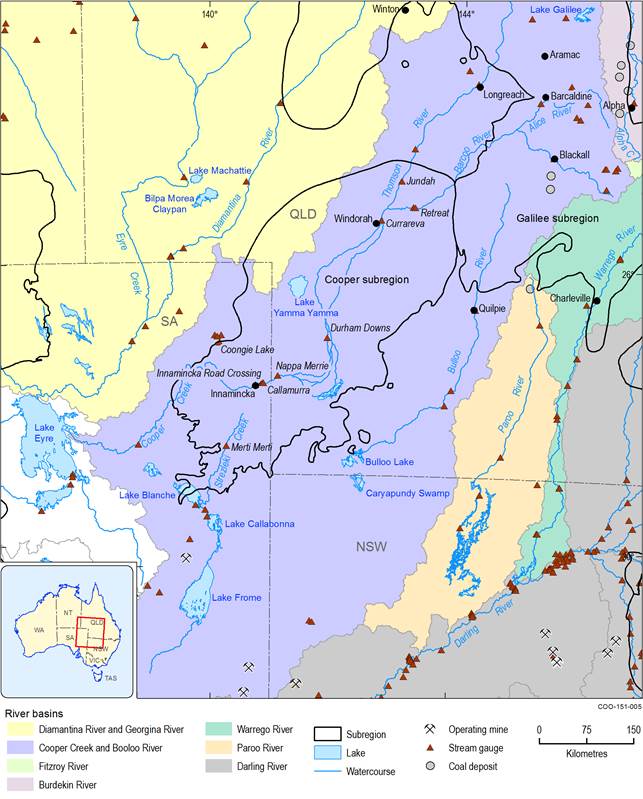 Cooper Creek and its tributaries are unregulated and are characterised by extreme variation in streamflow. The surface water resources in the Cooper subregion have not yet been affected by diversion or dams or weirs (Costelloe, 2013). Furthermore, there is no major public water storage within the entire Cooper creek basin. Surface water monitoring stations are relatively dispersed in the Cooper subregion and the mean flow of Cooper Creek varies between 3150 GL/year at Currareva and about 1430 GL/year at Nappa Merrie – Callyamurra (McMahon et al., 2005). One of the major tributaries of Cooper Creek is the Thomson River, which produces mean annual flow (MAF) of about 2700 GL at Stonehenge. The Barcoo River is another major tributary of Cooper Creek and it produces MAF of about 809 GL at Retreat (McMahon et al., 2005). Streamflow in Cooper Creek and its tributaries is predominantly seasonal and the groundwater contribution is relatively low (the baseflow index is less than 0.2). Currently, the information on total surface water yield is not available for the Cooper creek basin.

Water allocations in the Queensland part of the Cooper creek basin are granted under its six relocateable licence zones (i.e. Torrens Towerhill, Alice, Upper Barcoo, Lower Barcoo, Thomson and Cooper). Currently, there are 40 general licences of nominal entitlements amounting to 17.1 GL/year and 24 stock and domestic licences amounting to 0.3 GL/year (DNRM, 2013). In the 2011 water resource plan for Cooper Creek, the Queensland Government reserved a total of 2000 ML of unallocated water (200 ML for general reserve, 1300 ML for strategic reserve and 500 ML for the town and community reserve) to meet future demand (DERM, 2011).

Water allocations in the SA part of the Cooper creek basin are granted under the water allocation plan for the far north prescribed wells area (SA Arid Lands NRM Board, 2009). Currently, there are no surface water licences and as the use of surface water is insignificant compared to groundwater, it is assumed that all water used for stock and domestic is sourced from groundwater for the accounting of water use (SA Arid Lands NRM Board, 2009).

Surface water resources in the SA portion of the Cooper region are not prescribed and therefore no information is available on licences or allocations. There are very few reliable natural waters in the downstream part of the Cooper subregion. Stock and domestic supplies for early settlement had to be obtained from wells drilled into small local aquifers and the construction of earth tanks and reservoirs (SA Arid Lands NRM Board, 2010). Surface water management in the SA part of the Cooper subregion is described in companion product 1.1 for the Cooper subregion (Smith et al., 2015). Further information on the Far North NRM regions can be obtained from relevant SA government agencies (e.g. SA Arid Lands NRM Board, 2009; Agnew et al., 2014).

The information required to derive a detailed surface water account is not readily available for the Cooper subregion. This limits the capacity of water resource managers to formulate a water allocation plan.

Summary and download
1.5 Current water accounts and water quality for the Cooper subregion