In addition to the projects currently under construction, a number of additional CSG projects have been proposed. These are Arrow Energy’s Surat Gas Project, which has received State Government and Australian Government approval, Santos’ Gladstone LNG Gas Field Development Project, and Origin Energy’s Ironbark Project. The two latter ones are currently in the stage of preparing an EIS. The location of these projects within the Maranoa-Balonne-Condamine subregion and their potential extent is in Figure 15 which also highlights the network of gas pipelines in the subregion and the pipelines to Gladstone. 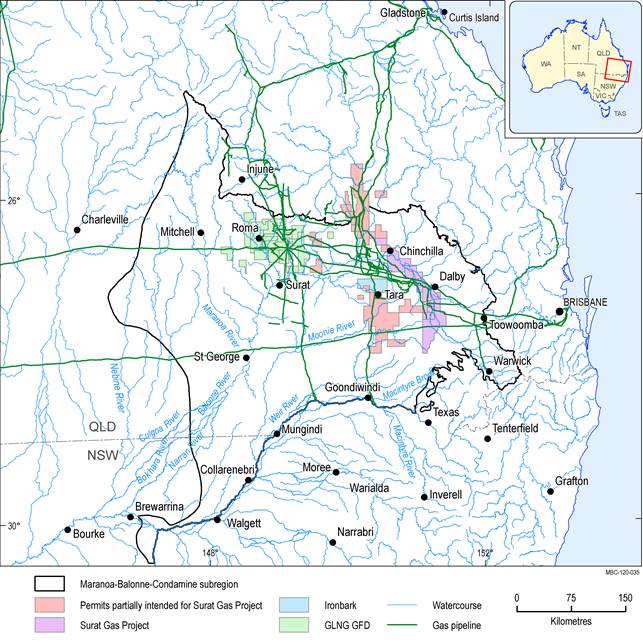 Figure 15 Petroleum tenures of the proposed but not approved coal seam gas developments in the Maranoa-Balonne-Condamine subregion. The petroleum tenures include both authorities to prospect and petroleum leases

The Surat Gas Project (SGP) is one of five components of the proposed Arrow Energy LNG project which, at present, involves:

The SGP will also continue to provide gas for the domestic market (Australian Mining Link, 2013).

Under the proposed SGP, production at Arrow Energy’s existing CSG fields Stratheden, Kogan North, Daandine, and Tipton West would be expanded and other Arrow Energy tenures in the Surat Basin would be developed. The development area of the SGP covers approximately 6100 km2 and extends in an arc from Wandoan in the north, through Dalby in the east, down to the south-west of Millmerran as demonstrated in Figure 16 (Arrow Energy, 2012, 2013, 2014b). Its location and extent within the Maranoa-Balonne-Condamine subregion is shown in Figure 15 and the individual petroleum tenures containing the gas field developments are summarised in Table 13. The combined 2P reserves of the tenures of the SGP in the Maranoa-Balonne-Condamine subregion, as per Table 13, are 6872 PJ as of 31 December 2013 (DNRM, 2014d). 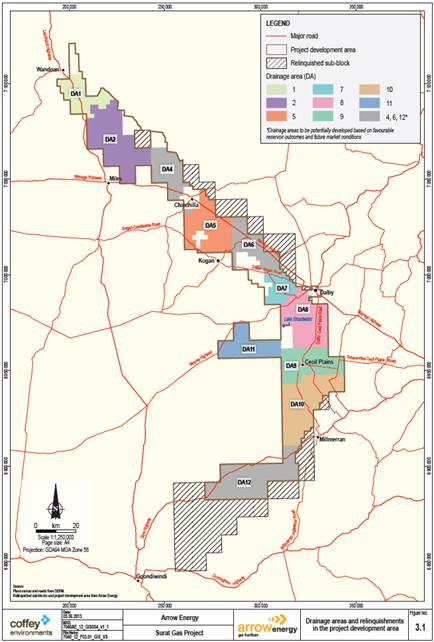 Source: Figure 2-1 in Alluvium (2013). This figure is not covered by a Creative Commons Attribution licence. It has been reproduced with the permission of Arrow Energy.

A maximum of 6500 wells are to be drilled throughout the project life (Department of the Environment, 2013a). The wells will include vertical and deviated wells which apply directional drilling technology (Arrow Energy, 2013). Hydraulic fracturing has been prohibited as a condition of project approval (Department of the Environment, 2013a). The deviated wells enable larger contact areas between the well and the CSG reservoir and thus enable higher flow rates. The deviated wells also allow multiple wells to be at the same central surface location (multi-well pad). The maximum number of production wells for one multi-well pad is 12, but 9 wells will be typical. Arrow Energy estimates that approximately 30% of the wells drilled will be single vertical wells, while 70% will be deviated wells arranged in multi-well pads. Arrow Energy has committed to a minimum mean well spacing of at least 800 m and aims to be flexible with the siting of well pads, targeting areas that will have minimum impact on land use (Arrow Energy, 2013). Drilling will occur up to a depth of 800 m and production will typically occur from coals between 300 and 750 m depth (Arrow Energy, 2013). The target coals for CSG extraction are those of the Walloon Coal Measures.

The SGP received environmental approval from the Queensland Government in October 2013 and from the Australian Government in December 2013. A decision to proceed with the SGP and the timing of that decision are matters of Arrow Energy’s shareholders Royal Dutch Shell plc and PetroChina Company Limited. Arrow Energy is looking at multiple opportunities, including collaboration with one or more of the existing LNG projects, to develop its gas resource (Arrow Energy, 2014, pers. comm.).

As part of the GLNG Project, Santos GLNG is currently planning the GLNG Gas Field Development Project (GLNG GFD Project). The project is a continuation of the GLNG Project and aims to secure gas supply for the next 30 years through drilling of approximately 6100 production wells within the existing approved areas and new surrounding tenures (Santos, 2013d). The EIS is currently being prepared (Queensland Government DSDIP, 2013). The project would involve further development of CSG reserves within the already approved development area of the GLNG Project (Roma within the Maranoa-Balonne-Condamine subregion, as well as Fairview and Arcadia outside the Maranoa-Balonne-Condamine subregion), as well as the development of additional petroleum tenures within the area highlighted as future development area in Figure 12 (Santos, 2012). The tenures located within the Maranoa-Balonne-Condamine subregion around Roma to be included in the GLNG GFD Project are in Figure 15. The individual tenures containing the GLNG GFD Project in the Maranoa-Balonne-Condamine subregion are in Table 11 (Santos, 2012). These are tenures that were already approved for the GLNG Project as well as additional tenures proposed for new CSG development. The project is estimated to run over 30 years and is planned to commence in 2016 (Santos, 2013d). The specific well locations, well numbers, and timing at Roma will be determined by ongoing exploration and appraisal activities. The combined 2P reserves of the GLNG GFD Project at Roma are 2807 PJ as of December 2013 (DNRM, 2014d) which include the 2P reserves of the approved GLNG Project (2745 PJ) (compare Table 8 and Table 11).

Origin Energy’s proposed Ironbark Project is in ATP 788 between the towns of Tara in the south, Dalby to the east, and Chinchilla to the north. Its position within the Maranoa-Balonne-Condamine subregion is indicated in Figure 15. The tenure is within the Undulla Nose region in the Walloon Fairway, adjacent to existing Origin Energy and QGC CSG developments, and covers an area of 64,140 ha (Origin Energy, 2011b). The 2P reserves were 259 PJ as of 30 June 2014 (Origin Energy, 2014b).

As part of exploration and appraisal activities, Origin Energy operates a small number of pilot CSG wells, appraisal wells, and monitoring wells at the Ironbark tenement. These have been drilled to evaluate the Ironbark gas resources ahead of planned possible development. The Duke 2 pilot and the Duke 3 pilot have five operating wells each and have been in operation since July 2012 and May 2013 respectively. Six wells have been drilled as part of a third production pilot, Duke 7, but the wells have not yet been completed (Origin Energy, 2014, pers. comm.).

An EIS for the Ironbark Project is in preparation (as of August 2014). Should the project gain approval, produced gas would be processed in a new gas plant and supplied to the Darling Downs Pipeline (DDPL) for sale to the domestic market (Origin Energy, 2011b).