This section includes all the currently operating CSG operations. For a development to be considered current, commercial production for that particular development needs to have commenced prior to December 2012.

Exploration and production testing for CSG from the Walloon Coal Measures of the Surat Basin began in 2000 with QGC’s Argyle 1 well (approximately 25 km south-west of the town of Chinchilla) confirming the CSG potential (DNRM, 2014b). Further exploration revealed the extent of the resource and resulted in considerable exploration and production activity in the Maranoa-Balonne-Condamine subregion of the Surat Basin (Arrow Energy, 2012). Commercial CSG production in the Maranoa-Balonne-Condamine subregion first commenced in 2006 at Kogan North located west of Dalby, shortly followed by CSG recovery at Berwyndale South, south-west of Chinchilla (DNRM, 2014b). The major CSG exploration and development companies in the subregion are Arrow Energy (owned by Royal Dutch Shell plc and PetroChina Company Limited), Origin Energy (as partner and operator of Australia Pacific LNG Pty Limited), QGC (a BG Group business), and Santos (as partner of Gladstone LNG). Maps showing current petroleum tenures and CSG wells within the Maranoa-Balonne-Condamine subregion are in Figure 5 and Figure 6. The data available from the IRTM (DNRM, 2014a) do not fully distinguish between CSG permits and conventional tenures (Figure 5). Not all the tenures indicated on the map are subject to CSG exploration or production. In Queensland the petroleum tenures that cover areas of exploration and production are called authority to prospect (ATP) and petroleum lease (PL). The ATP grants the holder the right for petroleum exploration, the PL gives its holder the right to explore for, test for, and produce petroleum (DNRM, 2014c). The term petroleum includes both conventional and unconventional (tight gas, shale gas, CSG) resources. 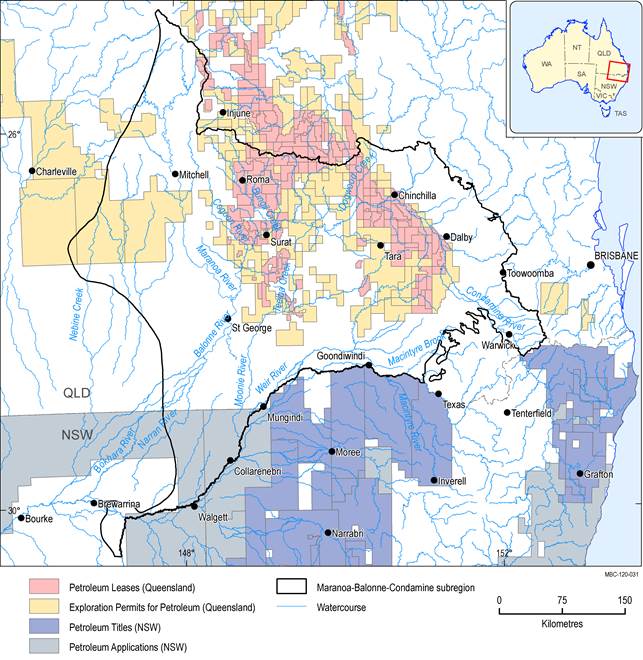 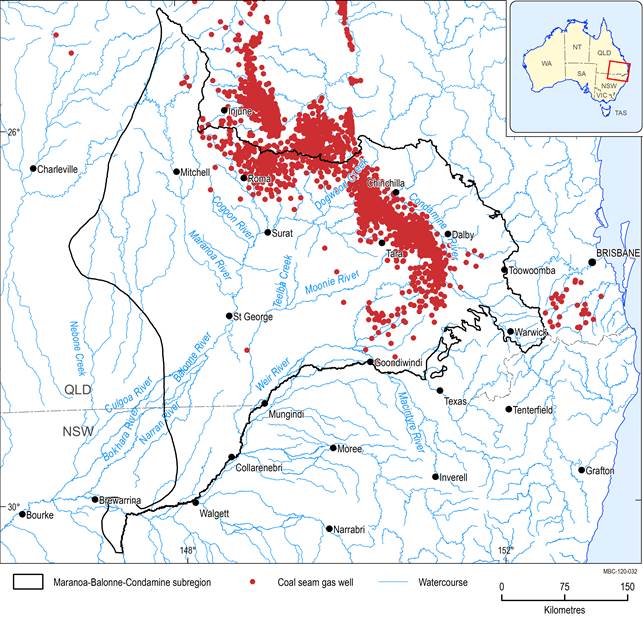 CSG field development in the Maranoa-Balonne-Condamine subregion has escalated in the recent past as a result of the construction of three large scale liquefied natural gas (LNG) projects on Curtis Island near Gladstone. A large portion of the gas to be supplied to the LNG projects will be extracted from the Walloon Coal Measures in the Maranoa-Balonne-Condamine subregion and transported to Curtis Island via pipelines. QGC, Origin Energy, and Santos are the operators of these LNG projects. As the projects were still under development as of 31 December 2012, they are described in Section 1.2.3.2 (Proposals and Exploration). However, part of the gas that is produced during the ramp-up phase of these projects is sold to the domestic market and gas fired power stations. This is further discussed in Section 1.2.2.2.7

Petroleum leases for current CSG operations are in Figure 7. Currently, Arrow Energy operates the Daandine, Kogan North and Tipton West gas fields; Origin Energy operates the Talinga gas field; and QGC operates the Argyle-Kenya, Lauren, Bellevue, Berwyndale, and Berwyndale South gas fields. Santos operated the Coxon Creek gas field north of Roma which has since been further developed to supply gas to the LNG project. The Department of Natural Resources and Mines listed the status of the Coxon Creek project as “in operation” for the financial year 2009 –10 (DEEDI, 2011), but for the financial year 2012–13 the status of the project (now called Roma) was given as “under development” (DNRM, 2014b). As the project’s status is under development, it is not depicted in the map below which shows current commercial CSG production in the subregion only. As indicated above, Santos’ CSG developments around Roma will be described in more detail in Section 1.2.3. 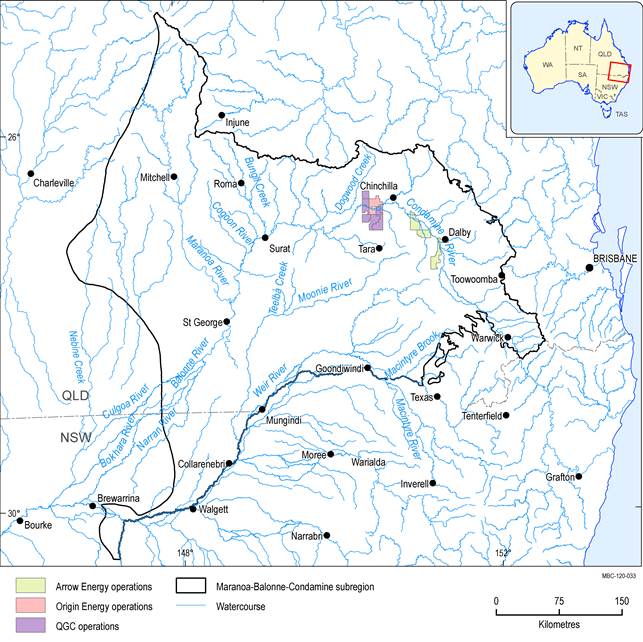