The National Water Initiative looks to improve the efficiency and sustainability of water use and management with Paragraph 25 x focusing on identifying surface and groundwater systems of high conservation value to manage these systems to protect and enhance those values (Department of the Environment, 2004). The Australian National Aquatic Ecosystem Classification Framework (ANAE) was developed to support the classification of aquatic ecosystems and help identify High Ecological Value Aquatic Ecosystems (HEVAE), as well as support mapping aquatic ecosystems (Department of the Environment, 2013b). State management of water in the bioregion falls under Queensland’s Water Act 2000 and the New South Wales Water Management Act 2000. Environmental values and water quality objectives have also been established for riverine, estuarine, coastal waters and groundwater, within the South East Queensland Natural Resource Management area legislated under the Environmental Protection (Water) Policy 2009, and within New South Wales as guidelines in the New South Wales Protection of the Environment Operations Act 1997.

Wetlands are an essential component of natural hydrological cycles, storing and purifying water, catching sediments and nutrient recycling, providing coastal protection against ocean movement and providing habitat and nursery sites for fish communities (The State of Queensland Environmental Protection Agency, 1999). Wetlands have cultural values as well as associated tourism and recreation values and provide ecosystem services. They also provide habitat for a diverse number of plants and wildlife, including waders and shorebirds. Many of these wetlands are listed habitat for bird species connected to international migratory routes and have agreements set up within The Convention on the Conservation of Migratory Species of Wild Animals (e.g. The Japan Australia Migratory Bird Agreement, China Australia Migratory Bird Agreement and the Republic of Korea Australia Migratory Bird Agreement). Over 100 species are listed under these migratory bird agreements.

The Clarence-Moreton bioregion has an extensive system of wetlands (Figure 5). A process for identifying wetlands was developed by the Queensland Department of Environment Protection (DEHP, 2013b) from regional ecosystems data augmented by satellite imagery and topographic maps. Wetlands were categorised into different types. These include:

The riverine, palustrine and lacustrine wetlands are in the process of being assessed for conservation and biodiversity values, in accordance with the HEVAE process, using the Aquatic Biodiversity Assessment Mapping Method (AquaBAMM) (DEHP, 2013a).

Two wetlands are listed as important (Environment Australia, 2001) in the Moreton Basin subregion. The Carbrook Wetlands Aggregation covers 3 km2 and is made up of 88.8% palustrine wetlands, 10.8% estuarine wetlands and 0.3% lacustrine wetlands. The wetland complex consists of sub-coastal floodplain lakes, floodplain grass, sedge and herb swamps and sub-coastal tree swamps (DEHP, 2013c). Major floral species include Melaleuca quinquenervia closed/open forest and Eucalyptus signata and E. intermedia open forest/woodland. These wetlands are extensively used by waterbirds, including the threatened black-necked stork (Ephippiorhynchus asiaticus), painted snipe (Roastratula benghalensis) and the chestnut teal (Anas castanea). Many of the waders utilising the ephemeral grassy wetland areas are listed under the migratory acts (Department of the Environment, 2010).

The Upper Coomera River is classified as an important riverine wetland in the Richmond-Tweed Scenic Rim subregion, as are the Dalrymple and Blackfellow Creeks. The Upper Coomera River varies from warm subtropical notophyll to temperate microphyll rainforest and sclerophyll forest (Churchett, 1982) depending on elevation. Species-rich communities in the wetlands support a diverse range of fauna and uncommon plant communities. A number of vulnerable, rare and threatened species find refuge habitat within this wetland area. Six out of eight Regional Ecosystems are ‘of concern’ however none are endangered. Five endangered fauna species inhabit the wetland area: the cascade tree frog (Litoria pearsoniana), Fleay’s barred frog (Mixophyes fleayi), red goshawk (Erythrotriorchis radiates), eastern bristlebird (Dasyornis brachypterus) and Coxen’s parrot (Cyclopsitta dipthalma coxeni; Table 19). These species are also endangered in the Dalrymple and Blackfellow Creeks wetland area.

Dalrymple and Blackfellow Creeks consist of varied habitats in a montane environment including marsh environments with rainforest and riparian communities and montane creeks. The wetland has scenic and wildlife refuge value but is well known for its natural state and high integrity (Knight et al., 2002). Only lower reaches have been affected by clearing and grazing. Vegetation remnants provide high connectivity and refuge. Of the ten Regional Ecosystems, six are ‘of concern’. Unusual montane and submontane sclerophyllous forest exists and includes the rare Dunn’s white gum (Eucalyptus dunnii) and Bailey’s cypress (Callitris baileyi). Four bird species which frequent the wetlands are listed in international migratory treaties, including the great egret (Ardea ibis). Dalrymple Creek contains the largest assemblage of macroinvertebrate family taxa for a wetland in South East Queensland (Knight et al., 2002).

Estuaries in the Clarence-Moreton bioregion are dominated by mangrove communities (composed of Avicennia marina, Aegiceras coniculatum, Exoecaria agallocha) and saltmarsh species. Freshwater margins are occupied by swamp oak (Casuarina glauca) and paperbark (Melaleuca quinquenervia) while flooded gum (Eucalyptus grandis) grows on alluvial river flats. Banksia and bangalow palms are found in the dunes and heath and paperbark swamps occur behind the dunes and near the lagoons. Rare patches of rainforest species can be found even here where sufficient soil nutrients have accumulated.

Much of the coastal wetlands in the major river basins of the bioregion have been significantly reduced, especially in the northern coastal area of New South Wales where an estimated loss of up to 85% of coastal wetlands has occurred (Goodrick, 1970; Pressey and Middleton, 1982). The main pressures currently or historically affecting parts of the rivers and wetlands downstream and estuaries in the bioregion can include:

There are over 70 threatened plant and animal species. These include the giant waterlily (Nymphaea gigantean), the endangered weeping paperbark (Melaleuca irbyana), Hygrophila angustifolia and the mangrove fern (Acrostichum speciosum). The water plantain (Alisma plantagoaquatica) is at its most northern limit of distribution. Threatened species mainly dependent on wetlands, include the endangered spider orchid (Dendrobium melaleucaphilum), the endangered southern swamp orchid (Phaius australis) and vulnerable Maundia triglochinoides (NSW Department of Environment and Climate Change, 2008). Many animals depend on the wetlands as habitat for breeding, foraging, and shelter, including birds, frogs, fish, reptiles and mammals. Threatened species that depend on these wetlands include the black-necked stork, comb-crested jacana, magpie goose and painted snipe.

The Clarence and Richmond Lowlands contain some acid sulfate soil areas. These are the result of naturally-occurring sediments and soils containing iron sulfides (especially pyrite) and/or their precursors or oxidation products (Clarence Catchment Management Committee, 1998). Acid sulfate soils occur if exposure of the sulfides to oxygen increase as a result of drainage or excavation of ground water that leads to the generation of sulfuric acid. Tulau (1999) identified several priority areas for acid sulfate soil management in the lower Clarence system including Everlasting Swamp, Shark Creek, Alumy Creek and the lower estuary.

The Healthy Rivers Commission (1998) and NSW DPI (2013b) noted that flood mitigation and drainage works have had significant detrimental impacts on the health of the Richmond and Clarence River. These include a reduction in the number and area of back swamp freshwater wetland areas, reduced areas of supratidal and intertidal saltwater wetlands, reduced areas of habitat for fish and other estuarine species, fish diseases and death due to acid discharge, and the alienation of agricultural land due to scalding. Floodgates have changed mangrove-fringed tributaries into drainage channels, and destroyed large areas of estuarine fish nursery and habitat (Pollard and Williams, 1997).

Acid discharges and reduction in fish habitat (Pollard and Hannan, 1994) have had a significant impact on the fishing and prawning industries in the Clarence Lowlands (Clarence Catchment Management Committee, 1998). Water quality requirements and tolerances for prawn species are outlined in Lancaster (1990). However, fish kills do not appear to be a common occurrence in the lower Clarence and its tributaries, possibly due to the generally high flushing of the Clarence River, although the effects of chronic exposure to poor quality water, such as red-spot disease, are common. New South Wales Fisheries has reported instances of fish kills and poor water quality flowing from Everlasting Swamp and tributaries that are blocked by floodgates, such as Sportsmans Creek, which also had a relatively low dissolved oxygen (Tulau, 1999). 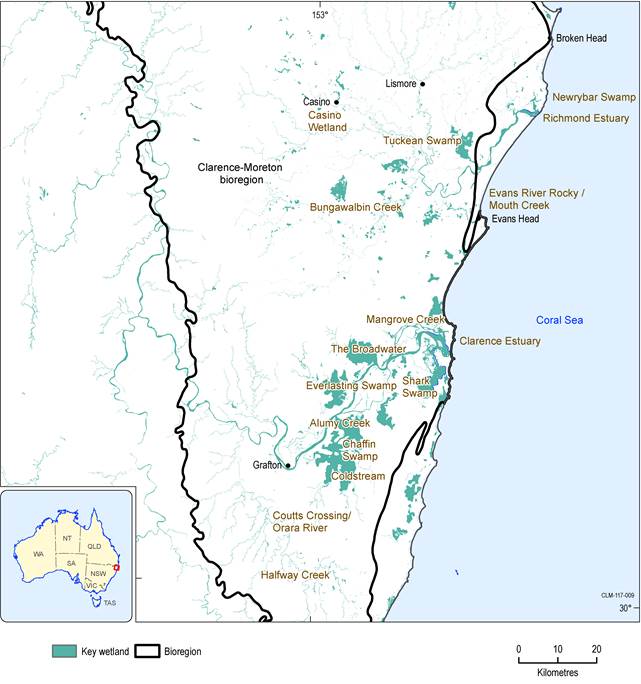