The Clarence-Moreton Basin is the youngest of a series of Mesozoic basins in south-east Queensland and north-east New South Wales, and is genetically linked to:

Paleogene and Neogene volcanoes and fissure eruptions were widespread throughout the Clarence-Moreton Basin. These features were associated with rifting of the east coast of Australia which began during the Early Cretaceous (Bryan et al., 2012).

Prominent central volcanoes within the Clarence-Moreton Basin include the: Main Range Volcanics, Mount Warning, Focal Point, Tweed and Mount Barney igneous complexes, Lamington Volcanics and Alstonville Plateau (Figure 19). These large igneous complexes in south-east Queensland and north-eastern New South Wales are associated with large-scale volcanic migratory ‘swell and pinch’ volcanic chains developed over intraplate plumes (Sutherland, 2003; Cohen et al., 2013). Two major eruptive centres occur in south-east Queensland (the Tweed and Focal Peak shield volcanoes) in addition to many smaller vents and fissures that have been identified to the north and north-west where lavas and sills of the Main Range Volcanics form the crest of the Great Dividing Range (Donchak et al., 2007). The Main Range Volcanics consist of massive, fine-grained olivine basalt, occurring mainly as flows with minor mudstone and fine-grained sandstone locally interbedded with the flows. The lavas of the Main Range Volcanics are typically less than about 200 m (DNRM, 2013, pers. comm.). However, locally near Toowoomba (Figure 19), they reach thicknesses of approximately 250 m and maximum thicknesses of up to 900 m have been reported from the Southern Main Range near prominent central volcanoes (Cohen et al., 2013). These rocks unconformably overlie the Marburg Subgroup and Walloon Coal Measures and are dated as Late Eocene to earliest Miocene (Cohen et al., 2013). The Alstonville Plateau consists of a sequence of Miocene basaltic flows, interbedded with weathering horizons and sediments (Brodie, 2007; Santos and Eyre, 2011). The flows of the Alstonville Plateau are the southern extent of the Lamington Volcanics (Figure 19), which are associated with the Tweed Shield Volcano which erupted between 23 and 20 Ma (Brodie, 2007).

Potential connectivity and pathways to the surface

Geological structures, particularly faults, can significantly influence vertical connectivity between aquifers. Depending on the characteristics of the fault zone and the aquifers, faults can form either barriers or conduits to groundwater flow, or they can compartmentalise regional groundwater flow systems by juxtaposing rocks of contrasting hydraulic properties. In the Clarence-Moreton Basin, particularly the Logan sub-basin, significant fault off-sets have been inferred based on seismic data (Figure 20). Such fault displacements occur commonly in the Clarence-Moreton Basin and juxtapose rock units with contrasting hydraulic properties. Many faults may also extend to the surface and potentially form preferential pathways linking deeper and shallower aquifers (Figure 20). 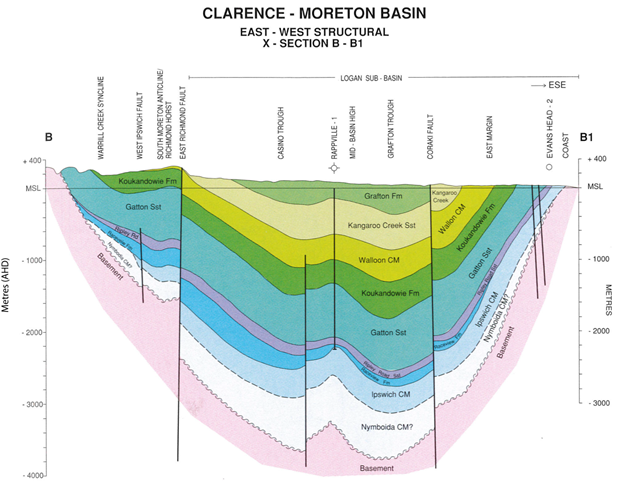 a. The location of this cross-section is shown in Figure 17.

Source: Ingram and Robinson (1996). This figure is not covered by a Creative Commons Attribution licence. It has been reproduced with permission from NSW Trade and Investment.