The Commonwealth’s Environment Protection and Biodiversity Conservation Act 1999 is a legal framework to protect and manage nationally and internationally important ecological communities, flora, fauna and heritage places that are identified in the Act as of national environmental significance. Queensland’s Nature Conservation Act 1992 and the New South Wales National Parks and Wildlife Act 1974 regulate the protection of wildlife and protected areas and places within the bioregion. The bioregion includes parts of two natural resource management regions: South East Queensland Catchments and North Coast Local Land Services. A regional plan has been developed for both areas to target ecological sustainability priorities in the next two decades (DERM, 2009; Northern Rivers CMA, 2013; RDA-Northern Rivers, 2013; SEQ Catchments, 2013).

The Clarence-Moreton bioregion consists of five IBRA subregions (Figure 29, Table 16, and Table 17) and is listed as a National Biodiversity Hotspot.

The bioregion consists of:

There are 88 animal species and 165 plant species listed as rare or threatened in the south-east Queensland region. Rare or threatened species includes those listed as extinct, extinct in the wild, critically endangered, endangered, vulnerable or conservation dependent under either the Nature Conservation Act (Queensland) or the EPBC Act (DEHP, 2013g) (Table 18 and Table 19).

The threatened species and ecological communities in the bioregion have been exposed to numerous threatening processes (WetlandCare Australia, 2013) including: 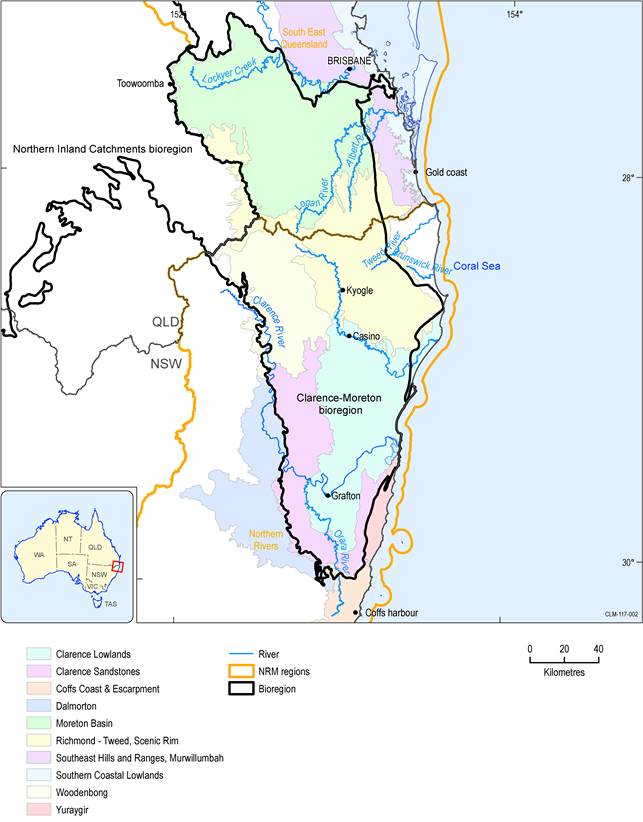 Because of large numbers of species, the table only shows the endangered species for birds and the nationally endangered for plants.