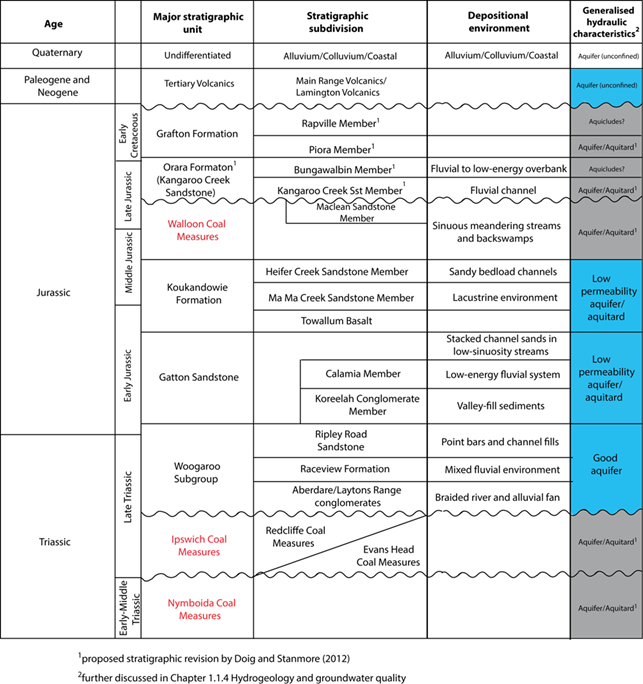 The Middle Triassic Nymboida Coal Measures outcrop in the southern part of the basin in New South Wales, comprising sequences of sandstone, shale, polymictic conglomerate, felsic tuff, basalt and coal with a thickness of up to 1000 m. The unit is thickest in the south-east but thins towards the west where only minor outcrops are known (Stewart and Adler, 1995).

The Late Triassic Woogaroo Subgroup is the oldest stratigraphic unit of the Bundamba Group in the Clarence-Moreton Basin with a maximum stratigraphic thickness of 1000 to 1200 m. The Laytons Range Conglomerate and Aberdare Conglomerate, the basal units of the Woogaroo Subgroup, consist of conglomerate beds with a thickness of up to 15 m, thin beds of sandstone, mudstones, siltstone and minor coal (O’Brien and Wells, 1994). These units also contain a large volume of quartz-rich sand grains derived from erosion of the uplifted granitic basement to the west of the Clarence-Moreton Basin (Rosenbaum, 2012) and deposited by braided rivers feeding stream-dominated alluvial fans and broad plains (O’Brien and Wells, 1994). The Raceview Formation is characterised by mudstone and siltstone and lesser sandstone (O’Brien and Wells, 1994). This unit formed in a mixed fluvial environment with channel fill sands deposited on the flanks of the Clarence-Moreton Basin, and overbank and accreting sand bodies deposited in intermediate areas, and fine-grained floodplain, swamp and lacustrine deposits accumulated in the most basinal positions. In the Cecil Plains and Laidley sub-basins, the Raceview Formation is comparatively thin and restricted to the deeper parts of the depocentres. The uppermost unit of the Woogaroo Subgroup, the Ripley Road Sandstone, has a maximum thickness of 150 m, and is dominated by coarse-grained and clean quartz-rich sandstone as well as quartz-rich granule conglomerate, with minor mudstone and coal. These were probably deposited as point bars and channel fills in a regional drainage system (Wells and O’Brien, 1994b; Ingram and Robinson, 1996). This upper unit of the Woogaroo Subgroup is a lithostratigraphic equivalent to the Precipice Sandstone of the Surat Basin (Wells and O’Brien, 1994b).

The Early Jurassic Gatton Sandstone is the basal unit of the Marburg Subgroup and the middle unit of the Bundamba Group. It is dominated by thick-bedded, medium- to coarse-grained quartz-lithic and feldspathic sandstone (Ingram and Robinson, 1996), primarily derived from uplifted and eroded Paleozoic basement rocks of the Woolomin Province as well as Permian-Triassic granite of the New England Batholith (Donchak et al., 2007). It was deposited as stacked channel sands in low sinuosity streams with high avulsion rates (O’Brien and Wells, 1994; Donchak et al., 2007). The Gatton Sandstone consists of two members (Koreelah Conglomerate and Calamia Member) with a maximum thickness of approximately 900 m intersected at the Kyogle 1 well in the Logan sub-basin (Wells and O’Brien, 1994b). It is mostly conformable with the Ripley Road Sandstone, or rests unconformably on basement rocks where the Ripley Road Sandstone is absent (O’Brien and Wells, 1994). The Calamia Member is generally only a few tens of metres thick and comprises thinly bedded mudstone, siltstone and cross-bedded sandstone (O’Brien and Wells, 1994; Ingram and Robinson, 1996). It was deposited by a lower gradient fluvial system compared to the rest of the Gatton Sandstone (O’Brien and Wells, 1994). The Koreelah Conglomerate Member occurs along the western margin of the basin and grades into the Gatton Sandstone towards the east. It consists of massive, clast-supported, polymictic pebble to cobble conglomerate, as well as massive matrix-supported sandy conglomerate and thick bedded coarse-grained sandstone (Wells and O’Brien, 1994b), deposited as valley-fill sediments (O’Brien and Wells, 1994). The Gatton Sandstone is correlated with the lower part of the Evergreen Formation of the Surat Basin (Donchak et al., 2007).

The Lower Jurassic Koukandowie Formation is the upper unit of the Marburg Subgroup and the Bundamba Group. It was described by Willis (1994) as a mixed-facies sequence consisting of sheets of interbedded quartzose-feldspathic-lithic sandstone, siltstone, claystone and minor coal with thickness of 250 to 500 m. It is conformably overlain by the Walloon Coal Measures and conformably rests on the Gatton Sandstone. It has three members: the Heifer Creek Sandstone Member, the Ma Ma Creek Member and the Towallum Basalt. The middle member of the Koukandowie Formation, the Ma Ma Creek Member, is composed primarily of finer-grained facies including shale, siltstone and interbedded sandstone with minor fossil woods and conglomerate bands. The deposition of the Ma Ma Creek Member occurred during interruption of fluvial conditions by a lacustrine environment in the Early Jurassic (Wells and O’Brien, 1994b). A widespread isochronous ferruginous oolite marker bed occurs at the base of the Ma Ma Creek Member in the Clarence-Moreton Basin, as well as in correlative stratigraphic horizons in other basins. It covers more than 350,000 km2, and has also been attributed to deposition in a large lake system, controlled probably by sea level or climatic changes that occurred during the Early Jurassic (Cranfield et al., 1994; O’Brien and Wells, 1994). The Heifer Creek Sandstone Member is a major regional unit composed of resistant medium- to coarse-grained and cross-bedded quartzose sandstone, with conglomeratic sandstone towards the top. Some fining upwards sequences near the top of the Heifer Creek Sandstone Member have characteristics of sandy bedload channel and point bar sands (Powell et al., 1993; Ingram and Robinson, 1996). The classification of the Towallum Basalt has long been unclear, but Bradshaw et al. (1994) suggested that the Towallum Basalt occurs at the base of the Koukandowie Formation, between the Ma Ma Creek Sandstone Member and the Gatton Sandstone.

The Middle Jurassic Walloon Coal Measures are composed of volcaniclastic, lithic and silty sandstone with interbedded mudstone and siltstone (Wells and O’Brien, 1994b). Ash-fall tuff is also present throughout the sequence (Doig and Stanmore, 2012). The Walloon Coal Measures were deposited in low energy depositional environments by highly sinuous streams meandering across a wide floodplain, as well as in shallow water backswamps (Donchak et al., 2007), possibly during a Middle Jurassic phase of high sea levels (Burger, 1994b). Volcanic ash falls were common, and avulsion rates were high during this period, leading to discontinuous deposition of coal seams. Near the edges of the basin, deposition of channel sands was more common (Ingram and Robinson, 1996). Numerous coal seams and carbonaceous coal shales with a maximum combined thickness of approximately 120 m have been intersected in the centre of the Logan sub-basin near Casino (Ingram and Robinson, 1996). The Maclean Sandstone, which occurs on the eastern basin margin and thickens towards the south at the top of the Walloon Coal Measures sequence in New South Wales, consists of massive to medium bedded, cross-bedded, labile, feldspathic and lesser quartzose sandstone. In Queensland, the Walloon Coal Measures are unconformably overlain by the volcanic and sedimentary rocks of the Main Range Volcanics. In New South Wales, the Orara Formation conformably overlies the Walloon Coal Measures.

A revision of the stratigraphy of the post-Walloon Coal Measures sequence has been proposed by Doig and Stanmore (2012) based on lithological records from new exploration wells in New South Wales. This pending stratigraphic revision is currently under review by the Geological Survey of New South Wales (J Greenfield (Geological Survey of New South Wales), 2013, pers. comm.). In the current formal stratigraphic nomenclature (e.g. Wells and O’Brien, 1994b; Geoscience Australia, 2013), the Kangaroo Creek Sandstone is classified as a separate stratigraphic unit overlying the Walloon Coal Measures in New South Wales (e.g. McElroy, 1969, Wells and O’Brien, 1994b). The proposed revision assigns member status to the Kangaroo Creek Sandstone, and if adopted, it will become the lower member within the newly created Orara Formation together with the upper Bungawalbin Member. The Kangaroo Creek Sandstone Member, as defined by Doig and Stanmore (2012), is composed of massive, quartzose, medium- to coarse-grained sandstone, interbedded with layers of siltstone and carbonaceous mudstone and finer-grained sandstone. The Kangaroo Creek Sandstone Member is a fluvial channel sandstone with small to large planar cross-bedding.

The upper member of the newly proposed stratigraphy, the Bungawalbin Member, has been defined in the type well Bungwalbin Creek 2 (Doig and Stanmore, 2012) and is characterised by mudstone and carbonaceous mudstone interbedded with thin layers of fine-grained sandstone from 45 to 115 m thick. Ripple cross-laminations throughout the Bungawalbin Member suggests that this unit was deposited in a fluvial to low-energy overbank environment (Doig and Stanmore, 2012). It conformably overlies the Kangaroo Creek Sandstone Member. 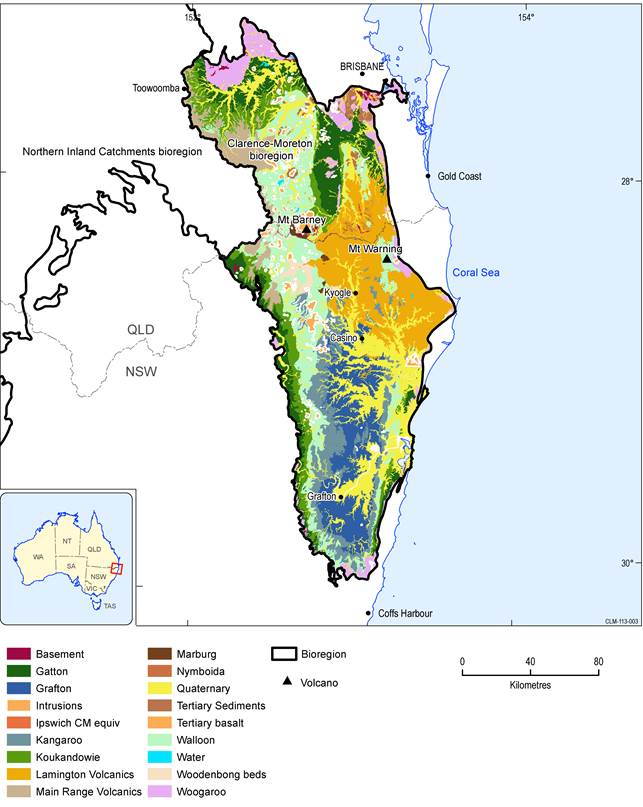