Figure 11 and Table 5 summarise regional model calibration performance for the eight calibration catchments. For both high-streamflow and low-streamflow calibrations, three metrics (F value, daily efficiency and model bias) are shown and their details are explained in the notes of Figure 11 and in Viney (2016).

The high-streamflow calibration yields slightly better results in terms of model bias, indicated by a mean bias of –2% and a median bias of 5%. Overall, the model under-predicts streamflow at three of the eight calibration sites and slightly over-predicts at the remaining five. In terms of Nash–Sutcliffe efficiency (denoted as E) of daily streamflow (Ed(1.0)), the high-streamflow calibration yields somewhat satisfactory results, indicated by mean and median Ed values of 0.38 and 0.36, respectively.

The eight calibration catchments cover a wide range of climate and topographic conditions, where mean annual streamflow varies from 7 mm/year at catchment 003302 to 78.6 mm/year at catchment 915013 (Table 5). This indicates that the Australian Water Resources Assessment landscape model (AWRA-L) is suitable to predict streamflow in the Galilee subregion where climate conditions vary widely. Furthermore, the performance of the high-streamflow calibration for the eight catchments is not significantly related to catchment wetness, as it does not perform better with a wetter climate. 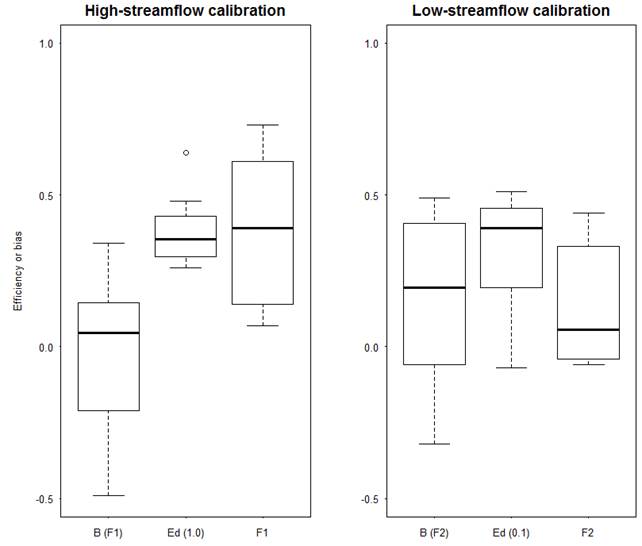 Boxplots are obtained from the statistics (Nash–Sutcliffe efficiency and bias) results at the eight calibration catchments. In each boxplot, the left, middle, and right of the box are the 25th, 50th and 75th percentiles, respectively, and the left and right whiskers are the 10th and 90th percentiles, respectively. AWRA-L = Australian Water Resources Assessment landscape model

The calibration results summarised in Figure 11 and Figure 12 indicate that neither of the calibration methods are good at predicting all of the hydrological response variables analysed in this Assessment. The main limitation is the lack of a long period of continuously observed streamflow data for model calibration. Stream gauges in the Galilee subregion are sparse and the length of data records is relatively short (less than 25 years). As stated by Viney (2016), it is expected that for most model nodes, the variables P01 and ZFD will be mutually exclusive in that one or the other will produce useful information, but not both. In the Galilee subregion, P01 is unlikely to provide useful predictions in model nodes.