2.6.1.3.5 Estimation of hydrological changes due to additional coal resource development

The changes in daily streamflow at each model node due to additional coal resource development are estimated as the total of two impacts: changes in direct runoff as a result of reduction in surface area generating runoff due to the open-cut mine, and changes in baseflow. For more detailed descriptions of mine impacts on hydrology, readers are referred to companion product 2.3 on conceptual modelling of causal pathways (Evans et al., 2018) for the Galilee subregion, which outlines the potential modes of impact between mining operations and surface water and groundwater systems. Section 2.6.1.3.4 describes how the open-cut mine footprints are obtained. Their direct impact is the streamflow detained in the mine footprint areas, simulated from the Australian Water Resources Assessment landscape model (AWRA-L) daily streamflow multiplied by the ratio of the footprint area to each node’s contribution area. This means that there will be no impact on streamflow if there is no additional coal resource development, and the reduction in streamflow will be 100% if the footprint area covers 100% of the node’s contribution area. Prediction model nodes are located in 11 tributary catchments (Figure 9) and 4 out of 7 proposed mines directly affect the flow regimes in catchment 10.

Underground mining can cause land subsidence contributing to a reduction in surface water flow. Therefore, a proportion of the underground mining area is included in the surface water disturbed area for assessing changes in flow regime. In the Galilee subregion it is assumed that 5% of the land surface area above a collapsed underground panel is potentially susceptible to retention of surface runoff through increased ponding. This value was selected as a conservative estimate based on consultation among the broader hydrological modelling team in the bioregional assessments, and was informed through discussions with proponents and experienced consultants. However, as the assumption is unlikely to have a major impact on predictions given the spatial and temporal scale of the regional modelling undertaken for the Galilee subregion, it was not incorporated in the quantitative uncertainty analysis.

The hydrological change to baseflow is estimated using the groundwater model, which is described in detail in Section 2.6.2.2.3 of companion product 2.6.2 for the Galilee subregion (Peeters et al., 2018). The groundwater model estimates monthly baseflow for each of the surface water model nodes under the baseline and CRDP. The difference between CRDP and baseline simulations is taken as the monthly hydrological change in baseflow, which is then equally partitioned to obtain the daily changes. 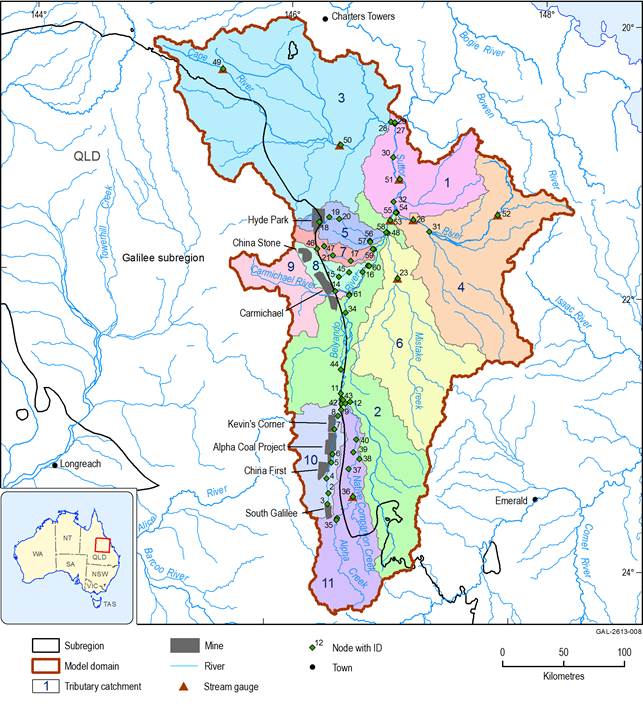