Hazard analysis is a critical part of the BA as it rigorously and systematically identifies the potential impacts (hazards) on water-dependent assets arising from whole-of-life-cycle CSG and coal mining activities. Only hazards identified through this process are considered further in a BA.

The findings for the Cooper subregion (Bioregional Assessment Programme, Dataset 1) are:

A range of generic causal pathways for hazards due to CSG operations are presented in companion submethodology M05 for developing a conceptual model of causal pathways (Henderson et al., 2015). Activities, impact causes and impact modes are identified, as well as those aspects of surface water and groundwater that might be affected. The causal pathways in the submethodology are generally applicable to all subregions or bioregions; this section presents results specific to the Cooper subregion.

The highest ranked hazards, ranked by the mid-point of the hazard priority number are displayed in Figure 28. The figure highlights that aquifer depressurisation, occurring through the activity of water and gas extraction during the production life-cycle, was the top ranked hazard. It occurred five times in the top 30, through various impact modes for: the coal seam; non-target, non-reservoir aquifers; when an aquitard is absent; and fault-mediated aquifer depressurisation.

The most frequently cited impact causes in the Cooper subregion IMEA are:

The hazard priority number or hazard score indicates the relative importance of the hazard. Hazards with low scores are of lower priority.

When ranked by hazard score, the analysis identifies disruption of natural surface drainage as the most frequent hazard associated with CSG operations in the Cooper subregion, occurring eight times in the top 30. This impact mode may occur through multiple activities during gas field construction. The top three associated activities were: constructing gas and water gathering pipeline networks; brine storage ponds, pumps and water disposal pipelines; and hypersaline brine ponds. Discharge into river following heavy rainfall and imbalance of mud pressure between well and aquifer appeared twice in the top 30. Disruption of natural surface drainage was the top-ranked hazard when ranked by hazard priority number. Following this was two impact modes with high detection scores (difficult to detect): incomplete compromised cementing/casing (linking aquifers) and leaking (from brine storage ponds, pumps and water disposal pipelines and from hypersaline brine ponds). 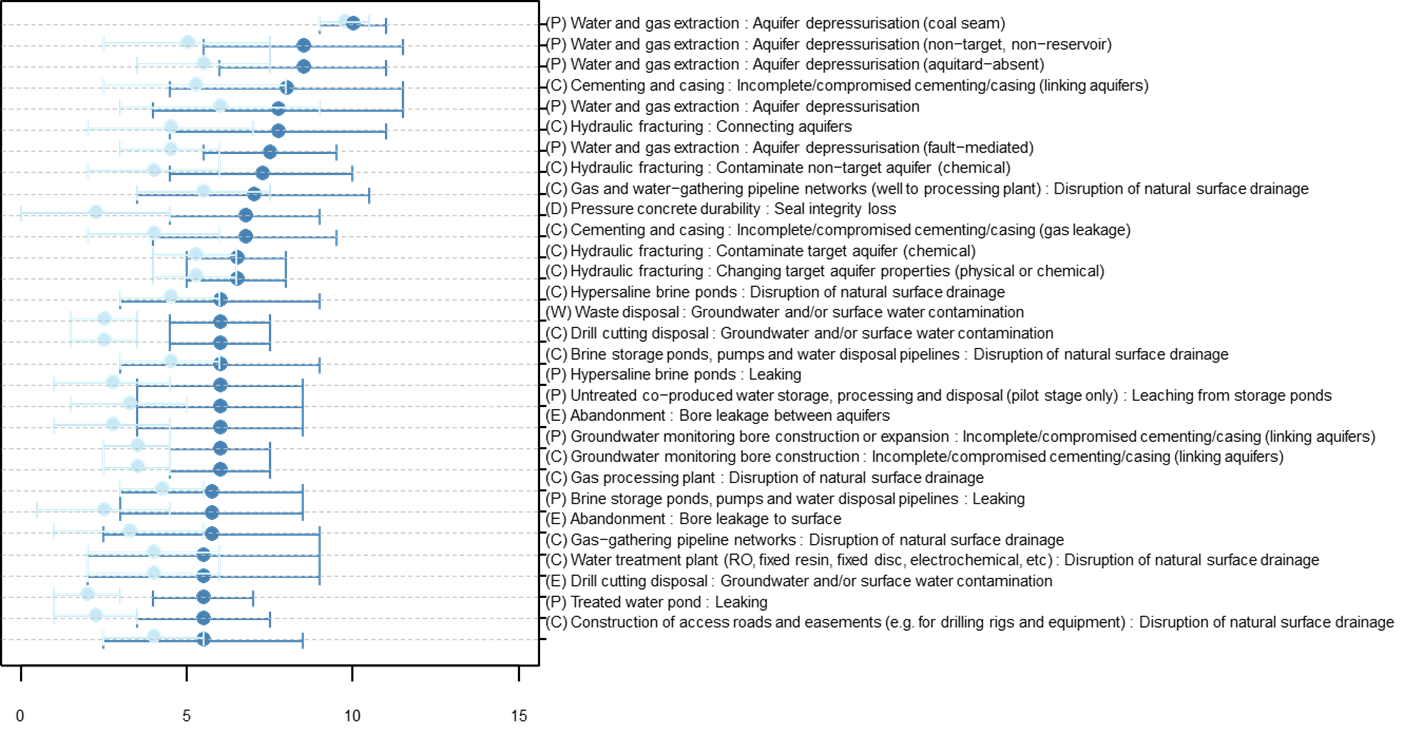 The x-axis shows the hazard priority number and hazard score for potential hazards. The intervals between the highest and lowest hazard priority number are shown in dark blue; the intervals for hazard score are shown in light blue. The same hazard may appear multiple times, as it may arise from a number of different life cycles and activities. Hazards are listed with the syntax [Life-cycle stage][Activity]:[Impact mode], where life-cycle stages are indicated by (E) for exploration and appraisal, (C) for construction, (P) for production, (W) for work-over and (D) for decommissioning.

A long list of hazards has been generated for CSG operations. The primary focus for the Assessment for the Cooper subregion are those hazards that extend beyond the development site and that may have cumulative impacts, as these are consistent with the regional focus of the Bioregional Assessment Programme, and are where the work will add value beyond site-specific environmental impact statements (EIS). EIS are required under SA regulatory approvals process.

Development of causal pathways and the hazard identification work undertaken for BAs only consider impacts that can happen via water, and so hazards such as dust, fire or noise are deemed out of scope and are addressed by site-based risk management strategies required as part of development approval conditions, unless there is a water-mediated pathway.

Hazards that pertain to the development site and with no off-site impacts are important to acknowledge but will typically be addressed by site-based risk management procedures.

For CSG operations, the following hazards were identified as being out of scope in the Cooper subregion, because they are deemed to be covered by site-based risk management and regulation: