The surface water and groundwater numerical models require data on areas affected by mine operations, depth of mine workings, water extractions and discharge rules to inform the model development and compare with model outputs.

The two potential futures considered in bioregional assessments (BAs) are:

The difference in results between CRDP and baseline is the change that is primarily reported in a BA. This change is due to the additional coal resource development – all coal mines and CSG fields, including expansions of baseline operations, that are expected to begin commercial production after December 2012. Table 13 provides a list of all the coal resource developments in the Namoi subregion, and an indication of how they were categorised for the BA modelling. All developments were included in both the surface water and groundwater modelling unless otherwise stated. Figure 45 shows the location of each development. Further information on the data and rationale used to decide the coal resource development pathway is provided in Section 2.3.4 of companion product 2.3 for the Namoi subregion (Herr et al., 2018).

A few elements common to the mine water management systems at all the mines are that unaffected surface water is diverted around the mine site where possible, and affected water in the mine area is utilised for mining and processing purposes. It is not possible to meter groundwater inflows to mines, and consequently inflow volumes must be estimated from surrogate observations or modelling. Additionally, there will be progressive rehabilitation of mined-out areas as mining advances. Thus, the amount of surface water that is disconnected from a catchment due to mining will vary during the life of the mine.

The water management systems for the baseline coal mines and additional coal resource developments (ACRD) (those mines in the CRDP but not in the baseline) are discussed below. The information provided is taken from documentation relating to each development, as indicated. It was outside the scope of the Bioregional Assessment Programme to undertake a critical analysis of the appropriateness of the methods and models used to derive the information presented, nor test the accuracy of the information. 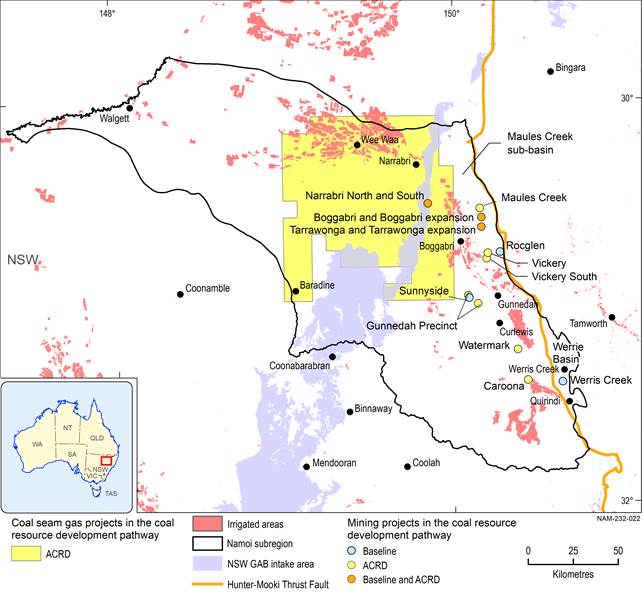