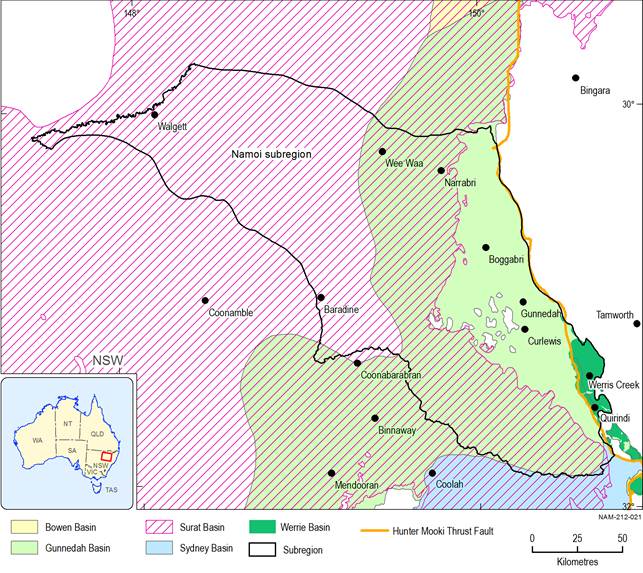 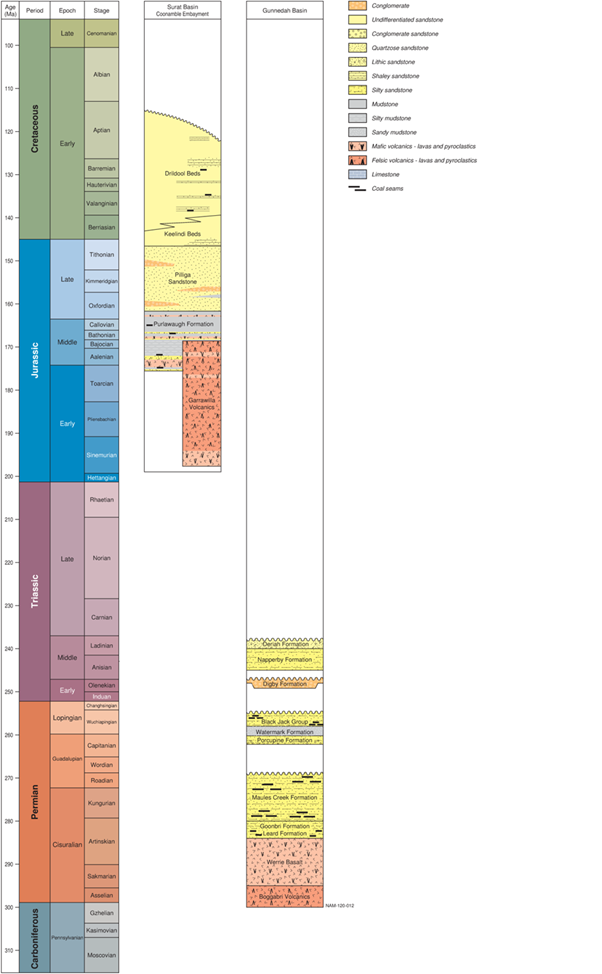 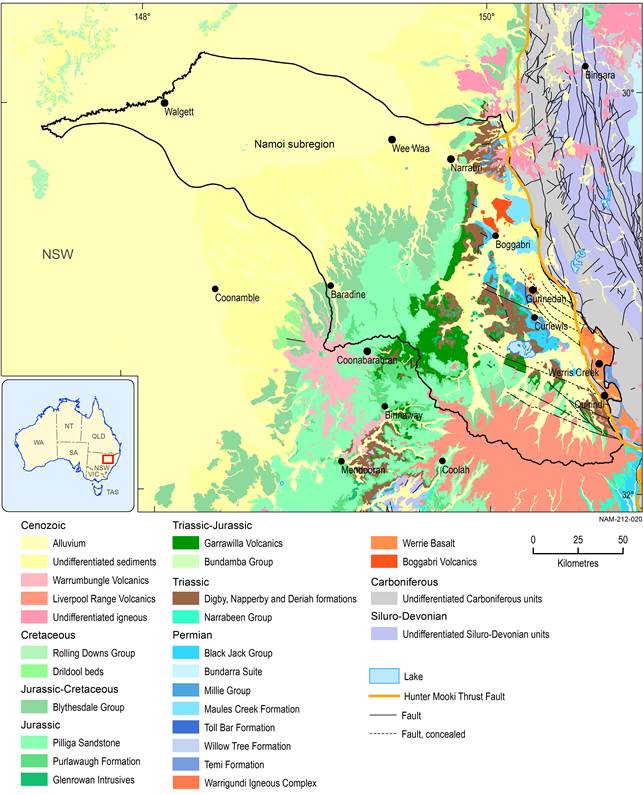 There are a number of pre-existing geological models in the Namoi subregion that were considered for use in this Assessment. Historically, the majority of geological models are local-scale models for mining operations that are not publicly available. Many of the mine-scale geological models are developed primarily for resource estimation and mine planning, for example the Maules Creek Mine (Hansen Bailey, 2011), and are therefore not suitable as the basis for a regional geological model.

There are two geological models that are regional in extent and include Gunnedah Basin strata in the Namoi subregion: the geological model developed by Schlumberger for the Namoi Catchment Water Study using Petrel software (Schlumberger Water Services, 2012), and the model developed by CDM Smith for the proposed Santos’ Gunnedah Coal Seam Gas Project (NTEC, 2013) using Leapfrog Hydro™. The geological model developed by Schlumberger Water Services (2012) was not available to the Assessment team. The geological model developed by CDM Smith (referred to as the CDM Smith model) was available, so the model was assessed for its suitability for the Namoi BA. Following some modifications which are discussed below, the CDM Smith model was considered to be fit for purpose, where the primary purpose is to delineate stratigraphic layers for the stochastic regional groundwater modelling of the impacts of additional coal resource development (discussed further in companion product 2.6.2 (Janardhanan et al., 2018)). Other factors that resulted in the model being considered fit for purpose were that it is regional in extent, includes the geological layers that have important water-dependent assets and the coal measures, is based on recent data and was available for use by the Assessment team. The model forms the basis for the stratigraphic layers for the numerical groundwater model, and is used as a basis for conceptual modelling of causal pathways, to aid the understanding of where and how coal resource development may affect water resources and water-dependent assets.

Modifications were made by the Assessment team to the CDM Smith model to incorporate recent improvements in knowledge, where available, and to simplify the number of layers given the regional extent of the model. The geological model isolates the layers of interest for the Assessment, namely the Permian coal seams and the layers with water-dependent assets (the alluvium and the Pilliga Sandstone). Most of the other layers have been lumped into interburden layers. The main modification made was to incorporate the model developed from the Water Resource Assessment for the Great Artesian Basin (GABWRA) (Smerdon et al., 2012) and the Hydrogeological Atlas of the Great Artesian Basin (GAB Atlas) (Ransley et al., 2015). The GAB Atlas is a compilation of up-to-date interpretations of the extent and thickness of key regional geological and hydrogeological aspects of the GAB (Ransley et al., 2015). Other modifications could be made to improve the representation of the system in the model if it were to be used for a different purpose, and these are listed in Section 2.1.2.3.

The modified geological model, hereafter termed the Namoi BA geological model, was constructed by first defining the base of the model, and then constructing a series of stratigraphic surfaces and thickness maps for each stratigraphic unit. These have been compiled to form a composite three-dimensional geological model for the Namoi. The domain of the Namoi BA geological model is shown in Figure 9 with the Namoi preliminary assessment extent and the Phanerozoic OZ SEEBASE™ basement structural model of the Gunnedah Basin (FROGTECH, Dataset 3). The Phanerozoic OZ SEEBASE™ is a continent-wide (low resolution) surface interpreted from magnetic, gravity, seismic and borehole data. In the Namoi subregion, OZ SEEBASE™ indicates the basement depth and structure of the Gunnedah Basin. 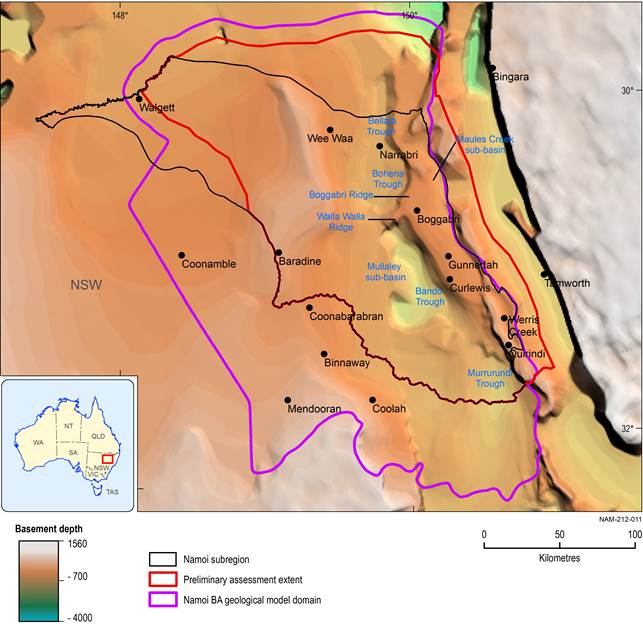 Figure 9 Basement elevation of the Gunnedah Basin with major depositional centres, showing the extent of the Namoi BA geological model and the Namoi preliminary assessment extent

The CDM Smith model forms the basis of the Gunnedah Basin strata in the Namoi BA geological model and consists of 13 layers representing the following major stratigraphic units in order of youngest to oldest (Halcrow, 2013):

There is little documentation available for the geological model, other than that from the Groundwater Impact Assessment for the Gunnedah Coal Seam Gas Project (NTEC, 2013). Each geological layer in the CDM Smith model is represented as a three-dimensional layer that can be continuous or discontinuous within the geological model domain. The thickness of layers and contact between the layers are based on interpolation and extrapolation of the input data and the types of stratigraphic relationships assigned in Leapfrog™. The model is discretised into 500 m x 500 m model cells. The thickness of each layer in each cell represents the mean formation thickness at that location. The model domain extends over approximately 53,200 km2 from the Hunter-Mooki Thrust Fault System in the east, to the extent of the Gunnedah Basin units in the south and north, which are outside the boundary of the Namoi subregion. The western boundary of the model domain is arbitrary and is parallel to the inferred regional groundwater flow direction in the Surat Basin.

There are distinct depositional sub-basins within the Gunnedah Basin (e.g. Maules Creek and Mullaley sub-basins, and other troughs), as shown in Figure 9 and discussed in companion product 2.3 for the Namoi subregion (Herr et al., 2018). The depth of these features can be in excess of 1500 m, and this is likely to be associated with faults or folding. The OZSEEBASE™ dataset (FROGTECH, 2014) currently provides the most comprehensive interpretation of structures in the Namoi subregion and shows a complex network of faults, particularly in the eastern part of the subregion where the rocks of the Gunnedah Basin occur at or close to the surface. The most intense faulting occurs in a zone adjacent to the Hunter-Mooki Thrust Fault System. The CDM Smith model does not contain faults and this is a limitation of the model, given faults with vertical displacements of up to 120 m have been identified in the Maules Creek sub-basin (Tadros, 1988). Depending on fault orientation, type and stress direction, faults can act to compartmentalise groundwater flow or provide a conduit for flow, so a more detailed understanding of structures and inclusion in this model would improve geological representation of the system.

Gunnedah Basin model layers have modelling artefacts such as bullseyes which suggest large changes in layer thickness that are unlikely to be realistic. It is not clear why these artefacts have developed in the model, but it may be the result of a model building artefact or the smoothing of thickness contours between data points or between model layers.

The Great Artesian Basin Water Resource Assessment (Smerdon et al., 2012) is a basin-scale investigation of water resources across the GAB, assessing the status of water resources, identifying the potential impacts of climate change and resource development on those water resources. The Assessment provided an updated interpretation of the geology and hydrogeology of the GAB, resulting in an update of the conceptualisation of how the groundwater system operates.

The GAB Atlas (Ransley et al., 2015) draws on GABWRA and is a compilation of maps documenting some of the key regional geological, hydrogeological and hydrochemical aspects of the GAB and its groundwater systems. It provides insights into the current understanding of the regional geometry and physical characteristics of the basin. The key pieces of new work that are presented in this Atlas are the up-to-date interpretations of the extent and thickness of the major GAB aquifers and aquitards.

Slight discrepancies were found with the boundary of the GAB, and therefore the extent of the Pilliga Sandstone, in the CDM Smith model. Consequently, the Assessment team used model layers derived from GABWRA (Smerdon et al., 2012) and the GAB Atlas (Ransley et al., 2015) for the part of the Namoi underlain by the GAB. The boundary of the GAB, as shown in the GAB Atlas, is coincident with the boundary of the Surat Basin. The information and data contained in the GAB Atlas is more recent than that used for the CDM Smith model, so the isopachs for the Rolling Downs Aquitard (which includes the Blythesdale Group in the CDM Smith model) and Pilliga Sandstone (referred to as the Cadna-owie – Hooray Aquifer) were imported into the geological model (Geoscience Australia, Dataset 5, Dataset 6). The thicknesses of the basal units of the Surat Basin in the Namoi subregion (Purlawaugh Formation and Garrawilla Volcanics) were determined by calculating the difference between the base of the Pilliga Sandstone equivalent and the base of the Surat Basin from GABWRA (Geoscience Australia, Dataset 7, Dataset 8).