An assessment of surface water – groundwater connectivity for the Namoi river basin was made by CSIRO (2007) as part of the Murray-Darling Basin Sustainable Yields Project using a regional mapping approach. This assessment provided a snapshot in time of the magnitude and direction of hydraulic fluxes to, or from, the major rivers in the Namoi river basin using data from June 2006 (or as close as possible), which was a period of historically low flows in the Namoi River (CSIRO, 2007). The analysis and methods are described in CSIRO (2007). The creek and river reaches in the highland areas of the Namoi river basin, such as the Manilla and Peel rivers (which are east of the Namoi subregion boundary), were assessed as gaining reaches. Further downstream, the river reaches change from predominantly gaining in the upper catchment through to losing and back to gaining in the mid-section of the Namoi River, as shown in Figure 30 (Parsons et al., 2008). The lowest reaches of the Namoi River were reported to form a losing system, and Pian Creek was classified by CSIRO (2007) as ‘maximum losing’, which the study defined as a river reach where the watertable is separate from the stream due to the presence of an unsaturated zone. These findings are generally consistent with previous regional hydrogeological interpretations, including Ivkovic (2006). 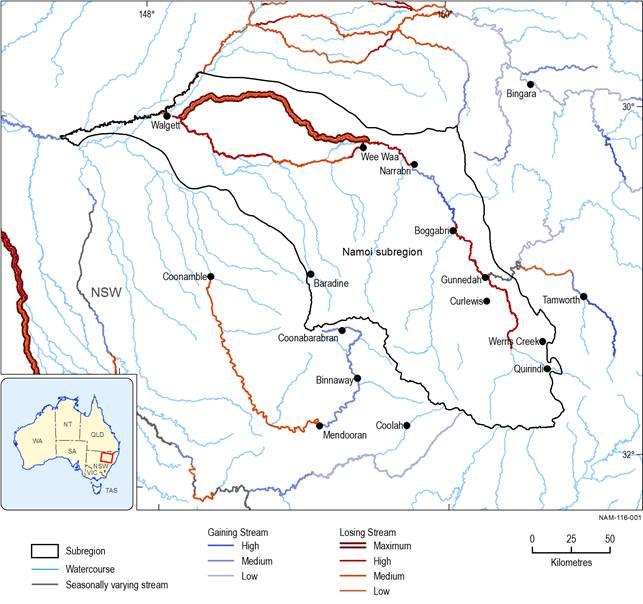 Ivkovic (2006) employed a combination of hydrological methods to assess surface water – groundwater connectivity and dominant direction of flux at the river reach scale in the Namoi river basin. The data analyses included:

The presence of hydraulic connection between the stream and underlying aquifer was assessed by Ivkovic (2006) through comparing the elevation of the base of the stream channel with the elevation of the groundwater observed within shallow observation bores (<40 m deep) located within 1 km of the stream (Figure 31). In areas without bore data within 1 km of the stream, extrapolations were made based on data points further away from the stream. Connection was assumed to exist where the minimum depth to groundwater over the length of the data record (from the 1970s) was less than 10 m. This depth was used as 10 m was the estimated difference between the elevation of the floodplain, where bore levels would be measured, and the base of the stream in the catchment. The minimum depth to groundwater over the length of the data record (since the 1970s) was intentionally chosen to provide a benchmark of where connectivity had at some point in time existed based on the available data. The value of 10 m as the cut-off for inferred connectivity was derived by comparing streamflow gauging station cross-sections on the major streams to the mean elevation of the surrounding 1 km2 area determined from the Australian 9 second digital elevation model (AUSLIG, 2001) as reported by Braaten and Gates (2002) (this gives a pixel size of approximately 0.06 km2 at the latitude of the Namoi subregion). Although the difference in elevation tends to decrease downstream as the topography becomes more subdued and the floodplains larger, this estimate was considered reasonable given the absence of detailed surveys of the riparian zone and the uncertainties of using a nine arc-second digital elevation model. 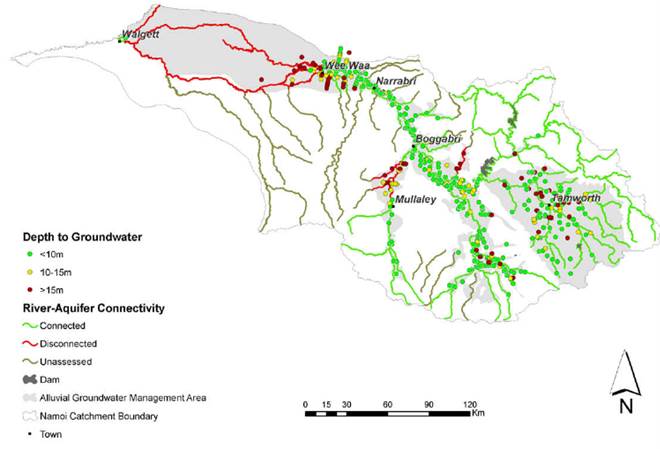 Figure 31 shows that the streams upstream of Wee Waa were assessed as primarily connected reaches. One exception is the approximate 30 km length of disconnected (non-contiguous) stream reach in the Coxs creek basin between Mullaley and Boggabri, where groundwater levels were reported to have been declining due to the widespread use of groundwater for irrigation (Brownbill, 2000). The river reaches downstream of Wee Waa were considered to be disconnected (or maximal losing and/or non-contiguous, depending on the classification system used).

Although the groundwater systems in the Lower Namoi river basin were assessed as ‘disconnected’ from the Namoi River and its tributaries in both the CSIRO (2007) and Ivkovic (2006) investigations, it is important to understand the intent of this term. In this context ‘disconnected’ is used to describe hydrological systems where the depth to the watertable is more than 10 m below the height of the river bed. CSIRO (2007) also use the term ‘maximum losing’ for the same situation, to indicate that some degree of connection remains between groundwater and surface water in this condition, through an unsaturated zone between the surface water system and the watertable. Hydraulic connection occurs between the stream and alluvium in many areas mapped as ‘disconnected’ and stream losses have been shown to play an important role in recharging the underlying aquifers based on the analysis of bore and stream hydrographs and hydrochemical data (Ivkovic, 2006; Lamontagne et al., 2011; McLean, 2003). Groundwater mounds are evident adjacent to the Lower Namoi River and its anabranch, Pian Creek, suggesting that streamflows recharge the underlying aquifers. According to other CSIRO investigations (Rassam et al., 2008), 56% of the Lower Namoi groundwater inputs are from river recharge, mostly associated with flooding inundation, in contrast with the Upper Namoi where only 4.5% is derived from flood recharge. Connectivity is, however, variable and Kelly et al. (2014) have postulated that the vertical connectivity between the river and the underlying aquifers is poor in some areas, reflecting the migration of the Namoi River channel and associated floodplain deposits, which tend to form low permeability layers.

After assessing surface water – groundwater connectivity, the dominant direction of flux was inferred from hydrometric data obtained from 35 streamflow gauging stations on the unregulated stream systems in the Namoi river basin. The results of the analyses are shown in Figure 32. A hydrometric approach was required to infer the direction of flux because of the absence of surveyed field data in the riparian areas of the Namoi river basin, which meant that near-river groundwater elevation and river stage relationships could not be reliably established. A baseflow filter was applied to the streamflow data to estimate the proportion of baseflow using the Lyne and Hollick (1979) digital recursive filter, as described in Nathan and McMahon (1990). In addition, the characteristics of the stream hydrograph, based on visual inspection, and flow duration data were analysed. The complete temporal data record was used to assess the dynamic changes in surface water – groundwater interactions over time, as using only synchronous streamflow records would have severely limited the available data pool. This approach was considered appropriate given the objective of characterising changes in surface water – groundwater interactions over the length of the available hydrological record.

Ivkovic (2006) found that relatively larger baseflow indices (meaning that baseflow is a higher proportion of streamflow) and streamflow of longer duration occur in the uppermost reaches of the Namoi river basin. In this area baseflow is contributed from the fractured rock aquifers into which the streams are incised. A decrease in baseflow index in the downstream reaches was associated with a decrease in flow duration, suggesting that groundwater input maintains streamflow in the upper catchment reaches. 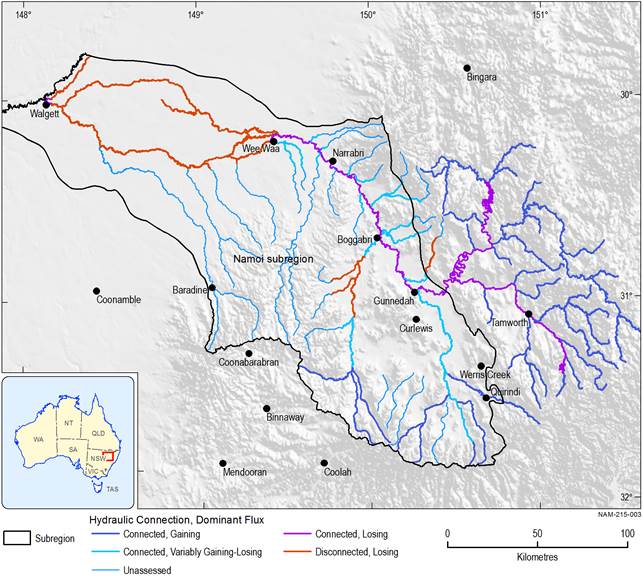 Mapping is at the river-reach scale. Disconnected reaches are where the watertable depth is greater than 10 m from the surface.

The inferred connectivity between the stream and underlying aquifer based on the hydrometric data was cross-validated through the assessment of paired bore and stream hydrograph data and other previous hydrochemical investigations, such as Lavitt (1999) and McLean et al. (2000). These details are further discussed in Ivkovic (2006).

Importantly, Ivkovic (2006) observed that connectivity status and flux commonly changed over the length of the data record, depending on the timing of the analysis. For example, stream reaches mapped as predominantly connected also exhibited variable connectivity. Gaining streams also interchanged with losing streams. The variability in connectivity and flux was found to respond to natural (e.g. changing climate and rainfall-recharge dynamics) and human induced factors (e.g. groundwater extraction, stream regulation and water extraction).

There were some differences in the interpretation of the flux direction between the CSIRO (2007) and Ivkovic (2006) investigations, but these differences can largely be attributed to the use of datasets spanning different observational periods. In particular, the CSIRO (2007) investigation used data obtained circa June 2006, whereas Ivkovic (2006) used the full length of the available hydrological data record (from the earliest data available through to 2003), thus encompassing a broader spectrum of hydrological conditions. Ivkovic (2006) also included a class for variably gaining-losing for the connected aquifer – stream reaches, which the CSIRO (2007) study did not include since they were assessing a snapshot in time. Despite the differences in the CSIRO (2007) and Ivkovic (2006) assessments in relation to the direction of flux, the connectivity mapping is broadly similar, and provides credibility to both mapping efforts at the regional scale.

Additional investigations into surface water – groundwater connectivity in the area of Maules Creek and the Namoi River between Boggabri and Narrabri (Namoi groundwater management zones 11 and 5, shown in Figure 33) were carried out by the University of New South Wales. They used a combination of geological data, geophysical methods, hydraulic data, and groundwater salinity, temperature and water chemistry data (Andersen and Acworth, 2007, 2009; Andersen et al., 2010; Giambastiani et al., 2012; McCallum et al., 2013; Rau et al., 2010). The results were consistent with CSIRO (2007) and Ivkovic (2006) and indicated that there is spatially and temporally varying degrees of connectivity between surface water and groundwater resources along the river reaches between Boggabri and Narrabri, with predominantly losing conditions during high flows and gaining conditions at low flows. However, McCallum et al. (2013) have noted that there has been a reversal in the aquifer–stream gradient in the Maules Creek catchment as a consequence of groundwater extraction, with the river now tending to lose water at low flows, rather than gain water. 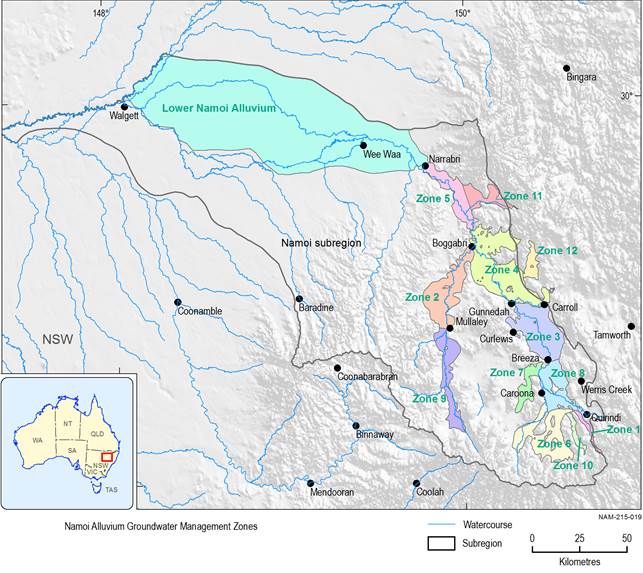