Nine existing datasets with useful hydrogeological information were analysed for the bioregional assessment of the Galilee subregion. Table 7 lists the datasets and identifies the information that was analysed.

Table 7 Data used for hydrogeological analysis of the Galilee subregion

The primary source for groundwater data is the Queensland Department of Natural Resources and Mines Groundwater Database (Dataset 2). It contains information on registered groundwater bores in the state of Queensland. The bore database has a number of tables which include data on: bore registration (location information), bore construction; stratigraphy, lithology, water levels, aquifer test data, water quality data, as well as other bore related information. Department of Natural Resources and Mines (DNRM, 2013) provides detail on groundwater database structure and content.

Other significant sources of groundwater data were environmental impact statements (EISs) (Dataset 5 to Dataset 8) for proposed coal resource developments in the Galilee subregion and formation tests undertaken in wells drilled for coal seam gas (CSG) and petroleum exploration (Dataset 3 and Dataset 4). EISs are a key source of information as they contain recent data pertaining to groundwater systems in and near proposed development areas. Formation tests are one of the few sources of information on pressures in the deeper groundwater flow systems.

The Galilee subregion BA is focused on two stacked geological basins – the Eromanga Basin and the Galilee Basin – that in some places are overlain by Cenozoic sediments. While parts of the Drummond, Adavale and Belyando basins are in contact with the base of the Galilee Basin, these basins are isolated from the areas of coal resource development and are not considered further.

The Galilee subregion includes the following geological environments which generally represent individual (or in some cases connected) groundwater systems:

Previous hydrogeological investigations within the Galilee subregion have been mainly restricted to local scale investigations focused in and around areas of potential coal mining developments. As such, prior to this BA, the understanding of the regional hydrogeology of the Galilee Basin was limited.

For the purposes of this bioregional assessment, a number of analyses have been undertaken to better understand the current hydrogeological characteristics of the region, which, in turn, allows an enhanced conceptual understanding of the effects of potential coal mining developments modelled in BA companion products 2.6.1 (Karim et al., 2018b) and 2.6.2 (Peeters et al., 2018) for the Galilee subregion.

The analyses include the following:

The above analyses are aimed specifically at improving our understanding of: the hydrodynamics of the system – groundwater flow, chemical evolution, areas of possible inter-aquifer leakage and recharge and discharge processes; and the current water level trends prior to coal resource development.

The hydrostratigraphy of the Galilee subregion is summarised in Figure 34.

The hydrostratigraphic units to which samples were assigned are outlined in companion product 1.5 for the Galilee subregion (Evans et al., 2014), with the following amendments:

These changes in title have not changed the hydrostratigraphic units that any samples were assigned to.

There is some variation between the geological units used for each type of analyses undertaken in the following sections. This is due to variability in the amount and spatial distribution of the available data for each individual geological unit. Hydrochemistry, water level mapping and aquifer pressure comparison analyses use hydrostratigraphic groupings for some units with similar hydrogeological characteristics. Whereas, the water level trend and recharge analyses are reported based on individual stratigraphic units. Descriptions of the units and groupings used are provided at the beginning of each respective section. 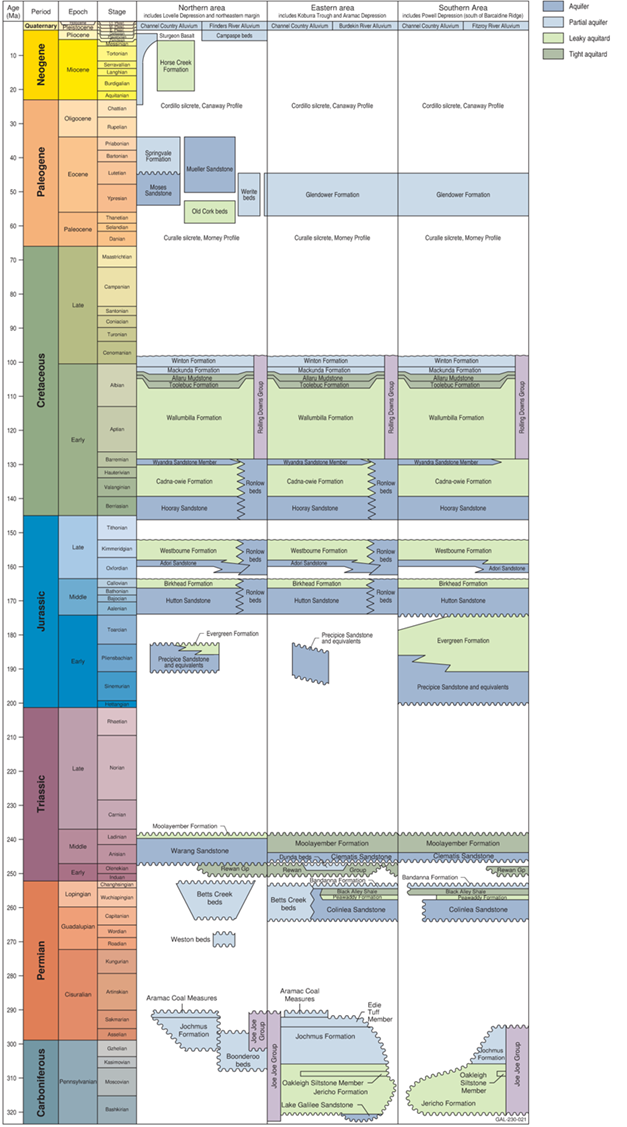 Hydrochemistry data were obtained from the Queensland DNRM groundwater bore database. A subset of this dataset was extracted for the Galilee subregion. Few bores had a complete suite of analyses for hydrochemistry, and data quality was highly variable. In some instances insufficient information (e.g. a description of the aquifer tapped and/or casing and depth information) was available to confidently determine the source aquifer for particular analyses. In such cases these analyses were discarded and not used for the subsequent interpretation. The initial hydrochemical dataset comprised 5680 samples with information for:

Prior to analysis all hydrochemistry data were assessed for reliability by quality assurance/quality control (QA/QC) procedures. A data audit and verification were performed using various quality checking procedures including identification and verification of outliers.

The charge balance of major ions in each sample was used to assess the reliability of the data. In some cases, alkalinity was expressed as calcium carbonate which required conversion to alkalinity as bicarbonate to achieve ionic charge balance.

The charge balance of each sample was determined using the following equation:

Theoretically the meq/L of anions in solution should be equal to the meq/L of cations, since natural solutions are electrically neutral. This means the deviation from zero in the charge balance calculation gives an indication of the potential error associated with the sample data. Given the age range and geographical extent of the groundwater data analysed by the BA programme, an ionic charge balance of 10% was deemed acceptable. Samples which exceeded this error threshold were discarded.

Measurements of field electrical conductivity (EC) data were limited, with many zero or missing values present. An initial investigation of the EC-TDS ratio of each sample within a particular hydrogeologic unit revealed a range of ratios from 0.2 to 12. To avoid the influence of outliers and obvious EC measurement errors, interpolation of TDS from the EC-TDS regression was only applied to the EC range between 0.50 and 0.90.

Further filtering of the data was required for some of the hydrochemical methods employed. This will be discussed in Section 2.1.3.2.1.

To interpret the hydrochemistry data it was necessary to assign each sample to a hydrogeologic unit. Data that passed the initial QA/QC procedures were checked against borehole construction and stratigraphic records to determine aquifer intercepts. Data were discarded in cases where there was no recorded screen interval or depth information that could be cross referenced with borehole stratigraphy, or where bores were screened in multiple aquifers. A total of 4624 samples which passed the initial QA/QC process had sufficient stratigraphic data to be assigned to a hydrogeologic unit.

SWL data for groundwater bores are primarily stored in the ‘water levels’ table in Dataset 2. Some SWL data, mainly for artesian bores, are also available from the ‘pumping test and design’ table of Dataset 2. Many of these measurements are also duplicated in the water levels table. SWL and other relevant data for hydrogeological analysis were extracted from Dataset 2 and incorporated with data from other sources using the following steps:

For bores with missing or incomplete screen interval data, the maximum recorded drilling depth was used as a proxy for the base of screened interval. However, it should be noted that in some cases using total depth as a proxy for base of screens may not be representative of the screened interval. For example in some cases a bore may be uncased below a certain depth and the open interval in the bore could be large and intersect multiple aquifers.

Various types of formation testing are commonly undertaken in petroleum and CSG wells as part of petroleum resource assessments. Over discrete intervals these tests can be used to assess: the presence of hydrocarbons, determine reservoir properties (pressures, temperatures, flow rates), well performance, and obtain samples of reservoir fluids.

Formation test and other data, for use in bioregional assessments, were data-mined using the following steps:

Groundwater bore data were obtained from available company EISs and tabulated in spreadsheets. Data included bore location, stratigraphy, water levels, hydraulic head (mAHD), well screen intervals, temperature and chemistry. Stratigraphic data in most of the EIS are more detailed (mine scale stratigraphy) than those available in Queensland Department of Natural Resources and Mines (Dataset 2). This level of detail was required for the BA groundwater model (in companion product 2.6.2 for the Galilee subregion (Peeters et al., 2018)).

Most formation tests had temperature data, although they lacked salinity data. Where no salinity data were available, water salinity was assumed to be the mean aquifer salinity.

Water level maps of hydraulic head are presented in Section 2.1.3.2.2. In areas where groundwater level data were unavailable, formation test data obtained from Dataset 3 and Dataset 4 were used to aid interpretation.

With the exception of Cenozoic aquifer water levels maps, all potentiometric surfaces are corrected to a common datum of 25 °C and equivalent fresh water head.