The Namoi subregion is situated in the Murray-Darling Basin and is part of the Northern Inland Catchments bioregion (248,000 km2). The subregion covers 29,300 km2 and is home to approximately 27,000 people, with the main centres, Gunnedah and Narrabri, located along the Namoi River. Drainage into the Namoi subregion is mainly from the eastern highlands to the north-west and west onto a broad floodplain. The four major geographic zones: Liverpool Plains, Pilliga, Pilliga Outwash and Castlereagh-Barwon, distinguished by similarity in climate, soils and land capability, are relevant for this Assessment (see, for example, companion product 2.3 for the Namoi subregion (Herr et al., 2018)).

The major stream in the subregion, the Namoi River, joins the Barwon River near Walgett in the west. Its major feeders, Pian Creek, Baradine Creek and Gunidgera Creek, drain the broad floodplain of the Castlereagh-Barwon area, whereas Bohena Creek emanates from the Pilliga Forest, and Coxs Creek and the Mooki River are located in the Liverpool Plains in east (Figure 3). The flow in the Namoi River is regulated through two storage dams outside the subregion, and several weirs also barrage the Peel River and Dungowan Creek (see companion product 1.1 for the Namoi subregion (Welsh et al., 2014)).

The alluvial plains across this subregion consist of alternating beds and lenses of gravel, sand and silt-clay sediments up to 150 m thick. The Namoi alluvium, located in the Liverpool Plains, supports a highly valuable agricultural development, which includes cropping of cotton and grains, with the less arable soils being under livestock grazing. Agriculture covers 70% of the subregion and irrigation is a significant part of the agricultural production in the subregion. Historical groundwater use has impacted on streamflow in the Namoi River and its tributaries. The Lower Namoi River has changed from a substantially gaining river prior to irrigation development to a largely losing river and long-term groundwater level declines at the western end of the valley, where usage is low, are most likely related to extraction higher in the valley.

A wide range of aquatic habitats, including large areas of anabranch and billabong wetlands downstream of Narrabri, add to the ecological significance of the Namoi subregion. The Liverpool Plains contain endangered native grasslands. River she-oaks and willows dominate the riparian vegetation, and river red gum communities grow along the major streams. The state forest of the Pilliga is the largest remaining area of dry sclerophyll forest west of the Great Dividing Range in NSW and the Pilliga Nature Reserve in the upper catchment of Bohena Creek is the largest reserve in the region. The asset register for the Namoi subregion (Bioregional Assessment Programme, 2017, Dataset 1; companion product 1.3 for the Namoi subregion (O’Grady et al., 2015)) contains many ecological assets and includes the potential spatial habitat distribution of species listed under the Commonwealth’s Environment Protection and Biodiversity Conservation Act 1999 (EPBC Act), and wetlands, river reaches and groundwater-fed springs (see Section 3.5). Lake Goran is listed in A directory of important wetlands (Environment Australia, 2001) and there are two Important Bird Areas listed (see companion product 1.3 for the Namoi subregion (O’Grady et al., 2015)).

From a geological perspective, the Gunnedah Basin contains the main coal-bearing sequences that are the target of historical, current and future coal and gas extraction. To the central and western parts of the subregion, the Surat Basin sedimentary rocks overlie the Gunnedah Basin. The Pilliga Sandstone and its outcrop in the central part of the Namoi subregion mark the boundary of the Great Artesian Basin (CSIRO, 2012). Coal mining targets the Gunnedah Basin where the coal seams come closer to the surface. The major coal mine developments occur in the Liverpool Plains and the coal seam gas (CSG) exploration is focused on the northern end of the Liverpool Plains, the Pilliga north of Coonabarabran and the eastern part of the Pilliga Outwash. There are five currently operating coal mines and nine additional coal mine developments are planned. A tenth development (Caroona), which was part of the coal resource development pathway (CRDP) (based on 2012 information), is now unlikely to go ahead as the NSW Government bought back the exploration licences to guarantee the future of farming land (NSW Premier and Cabinet, 2016). The only existing CSG exploration, the Narrabri Gas Project, is targeting the deeper coal seams of the Gunnedah Basin that underlie the Pilliga Sandstone (see companion product 2.3 for the Namoi subregion (Herr et al., 2018) and Santos (2017)).

Changes to the surface water and groundwater hydrology from the modelled additional coal resource development are documented in companion product 2.6.1 (Aryal et al., 2018) and companion product 2.6.2 (Janardhanan et al., 2018) for the Namoi subregion. Results from the modelling define a zone of potential hydrological change, outside of which impacts upon water-dependent landscape classes and assets due to additional coal resource development are deemed very unlikely (less than 5% chance). It is the risk to and potential impacts on water-dependent landscape classes and assets within this zone that is the focus of this product. 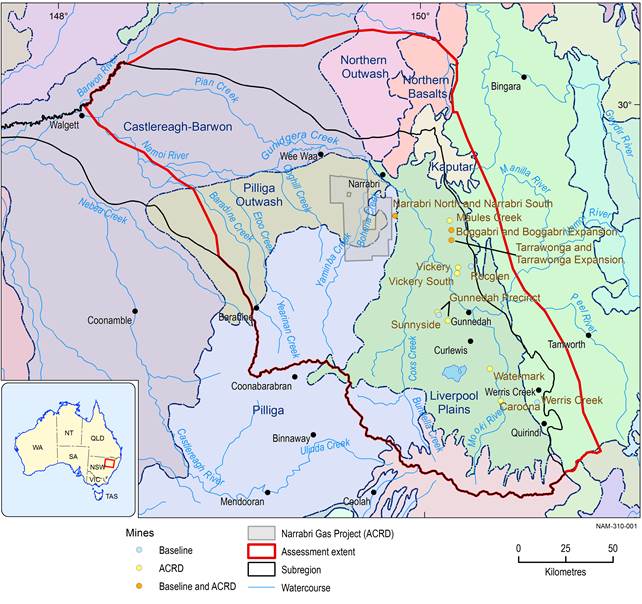