Springs are surface expressions of groundwater that create water flow at the surface and can discharge into wetlands and streams. The ‘Springs’ landscape group comprises two landscape classes: ‘GAB springs’ and ‘Non-GAB springs’. The distinction between these two landscape classes is based on the rock type of the underlying source aquifer for a given spring. GAB springs in the Namoi subregion are surface expressions of groundwater sourced from aquifers contained in the Triassic, Jurassic and Cretaceous sedimentary sequences associated with the GAB (Habermehl, 1982). GAB springs may form surface water bodies that support aquatic ecosystems and typically contain endemic species and plant communities that have significant ecological, economic and cultural values (Fensham and Fairfax, 2003). GAB springs can be associated with faults or aquitards, thinning of the confining layer or topographic conditions, such as a change of slope or a depression into an aquifer, that allow groundwater to discharge at the surface (Queensland Water Commission, 2012). Based on their hydrogeological setting these springs can be classed as ‘recharge’ springs or ‘discharge’ springs. Recharge springs form where the sedimentary rocks that make up the aquifers of the GAB have surface expressions and tend to be situated within the recharge zones of the eastern margin of the GAB (Figure 34) (Fensham and Fairfax, 2003). Groundwater recharge into the GAB aquifers in these areas occurs along sandstone outcrop areas that can include hilly upland areas, where rainwater percolates into the GAB aquifers between confining layers (Figure 34). The discharge of localised recharge is also termed ‘rejected recharge’. All other springs associated with GAB aquifers are known as discharge springs and tend to occur down-gradient from recharge areas, due to the presence of faults or where an aquifer comes to the surface (Figure 34) (Fensham and Fairfax, 2003).

‘Non-GAB springs’ are associated with local flow systems in the basalt aquifers in the eastern portions of the assessment extent and are disconnected from the underlying GAB aquifers. In the Namoi assessment extent, there are no artesian spring communities listed under the Commonwealth’s Environment Protection and Biodiversity Conservation Act 1999 (EPBC Act), and are not known to occur (only predicted) in this region under the NSW Biodiversity Conservation Act 2016 (OEH, 2016).

There are two springs located within the Namoi subregion zone of potential hydrological change classified as ‘GAB springs’ given their association with underlying sandstone formations (Table 46). These two springs are located on the eastern edge of the Pilliga region (Figure 35) and are thought to be primarily recharge springs as shown in Figure 34. This conclusion is based on their location along the eastern fringe of the Great Artesian Basin and are located on sites proximal to the interface between Pilliga Sandstone and Purlawaugh Formation. These two springs are identified as Eather Spring (asset ID: 3061; Bioregional Assessment Programme, Dataset 1) and Hardys Spring (asset ID: 3064; Bioregional Assessment Programme, Dataset 1) and are considered high-priority groundwater-dependent ecosystems (GDEs) by the Namoi region state of the catchment report (OEH, 2010). 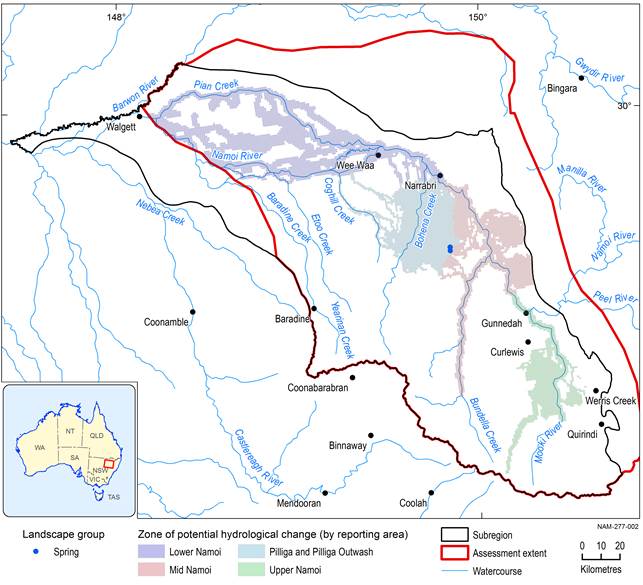