This product provides a baseline assessment of groundwater quality in the Gloucester subregion with a focus on salinity, and information on selected trace elements. Water quality is assessed against national guidelines provided by the National Health and Medical Research Council (NHMRC and NRMMC, 2011) and the Australian and New Zealand Environment and Conservation Council (ANZECC/ARMCANZ, 2000).

Before an assessment of groundwater quality can be carried out it is necessary to have a conceptual understanding of hydrological connectivity between different geological units. To assess the water quality of groundwater in the Gloucester subregion, geological formations were grouped together into hydrogeologic units based on the current conceptual understanding of the hydrodynamics in the subregion. Based on the geological setting and discrete structural-sedimentary formation (see Figures 22 and 23, McVicar et al., 2014), the Gloucester Basin, which underlies the Gloucester subregion, is characterised as a closed hydrogeological system. Multiple groundwater studies (Australasian Groundwater and Environmental, 2013; Heritage Computing, 2009; 2012; Parsons Brinckerhoff, 2012a; 2012b; 2012c; 2013) describe four main hydrogeological units within the basin:

Groundwater chemistry data for these hydrogeologic units were compiled from the NSW groundwater bore database (Bureau of Meteorology, 2014a). This database contains data from bores drilled from the early 1900s through to the present day. Over the decades there have been significant changes in how data from drill-holes are collected, as well as refinements in the general knowledge of the hydrogeology of the subregion. This can have implications for data quality. Due to the potential for impacts on groundwater levels and quality to cross catchment divides, available groundwater data were considered for the entire subregion.

To assess the potential hazards associated with using groundwater in the subregion, groundwater chemistry data were compared to national guidelines for water quality in which a number of possible water uses were considered. Water uses considered were: human drinking water, stock drinking water and water for long-term irrigation (defined as up to 100 years).

Groundwater chemistry data were primarily collated from the NSW groundwater database (Bureau of Meteorology, 2014a; 2014b). In total, data for 280 samples were available from 32 bores for the Gloucester subregion. Of these, 268 samples had data for salinity, but only a fraction of samples had trace element analyses. The number of analyses for trace elements is discussed in Section 2.5.2.1.2. In the absence of any stratigraphic data for bores in the Gloucester subregion, the sample data were assigned to a hydrogeological unit based on the depth of bore. No groundwater quality data for interburden and Alum Mountain Volcanics (deep water-bearing units) are available in the database.

Total dissolved solids (TDS) trigger values were determined using ADWG values for human consumption and the NWQMS for stock and irrigation water. The trigger values used for salinity are given in Table 10.

aValue is for unacceptable drinking water based on taste consideration

bValue is for sensitive crops

Groundwater salinity increases with depth from fresh to brine in alluvial aquifers (TDS = 71 to 422, 100 mg/L) and fresh to brackish in fractured rock (TDS = 201 to 4375 mg/L). Four groundwater sampling data recorded between 1977 and 1981 for bore GW023084 located in the alluvium aquifer has TDS values greater than 100,000 mg/L and reasons for high TDS/EC values are unknown.

Water quality values as reported by existing resource developments (Stratford Mining Complex, Duralie Coal Mine and AGL Gloucester Gas Project) were not considered in this report. The interpreted water quality may vary, if the above values are considered.

TDS data from bores were used to generate salinity trend maps for the groundwater-bearing units using the ‘topo to raster’, a constrained thin plate spline interpolation method in ArcGIS. This is an iterative finite difference interpolation technique which allows for surface continuity in sparse datasets. The available salinity data do not represent a single snapshot of water quality at a specific time; rather they provide a general indication of variations in salinity across the subregion. Furthermore, there is likely to be variation in quality of the sample analyses used to create the maps due to the archival nature of the data. Factors affecting archival data can include: use of different analysis methods; improvements in analyses technology over time; analysis accuracy and precision; variations in sample collection methodologies, and different bore construction techniques and quality. The archival nature of the data used means that temporal variation in water chemistry may contribute to the range of values seen in the TDS surfaces. However, the total variability in TDS for each hydrogeologic unit differs by at least one and sometimes up to four orders of magnitude, thus any temporal variations are likely to be minor in comparison to spatial variability.

As a quality control measure, some bore (sample analyses) data were excluded from construction of these surfaces. Where a single bore had high TDS that was anomalous in relation to other bores nearby, or where a single bore had high TDS with no controls nearby, these bores were excluded from generation of the TDS surfaces. Consequently, data points used for interpolation are averages for that location after anomalous values have been omitted. Also, as the interpolated surface is generated from point averages, the raw minima and maxima of some bore data have been moderated in the surfaces depicted in Figure 8 and Figure 9. Anomalously high TDS values may represent bores where stratigraphic or screened interval information are suspect; there was sample contamination; or errors occurred in the analysis. The errors in the analysis can include inherent errors of interpolation technique as well as the data used for constraining the surfaces.

Distribution of bores is often limited to within the vicinity of outcrop areas. Results may also be skewed in part through clustering of bores in areas where there is high production due to the presence of relatively fresh water, or alternatively areas with higher salinity are likely to have fewer bores to constrain interpolation. Interpretation of the TDS surfaces should be considered with these uncertainties in mind, and these maps should be treated as an image of regional trends in salinity for the hydrogeologic units in the subregion rather than a predictive tool for determining water quality where there is little bore coverage.

Values for TDS as reported by existing resource developments were not considered in this report. The interpreted TDS values for alluvium and fractured rock aquifer may vary, if the above values are considered. 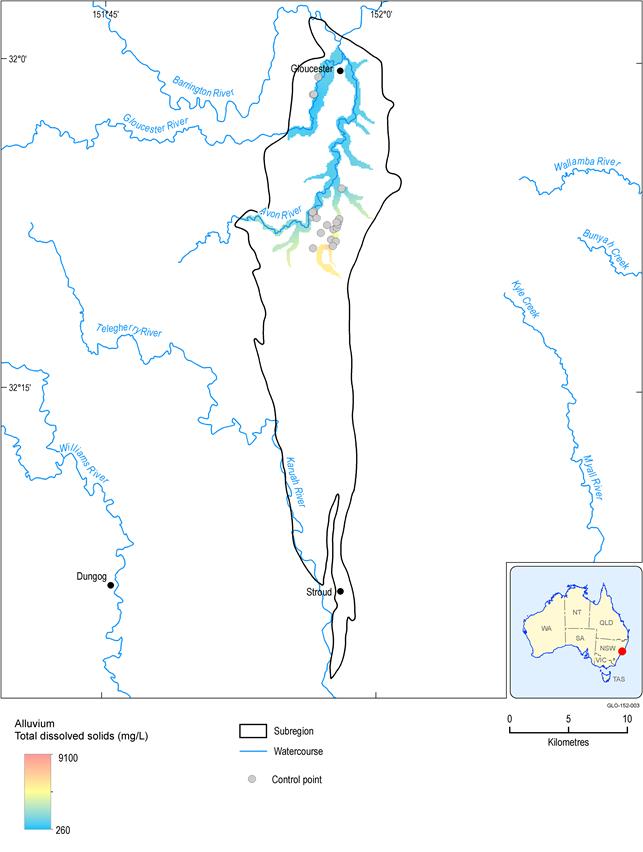 The fractured rock aquifer has variable TDS, with higher salinities occurring around the central part of the subregion (Figure 9).

Exceedances for the trace elements available in the dataset were determined using the ADWG for human consumption (NHMRC and NRMMC, 2011) and NWQMS (ANZECC/ARMCANZ, 2000) for stock water and irrigation water. Several elements have concentrations above ADWG or NWQMS triggers (Table 13), but the current dataset is too sparse to make any informed statement about trigger value exceedances of these elements.

Trace elements with a significant fraction of samples in exceedance of the guidelines include fluoride and iron. 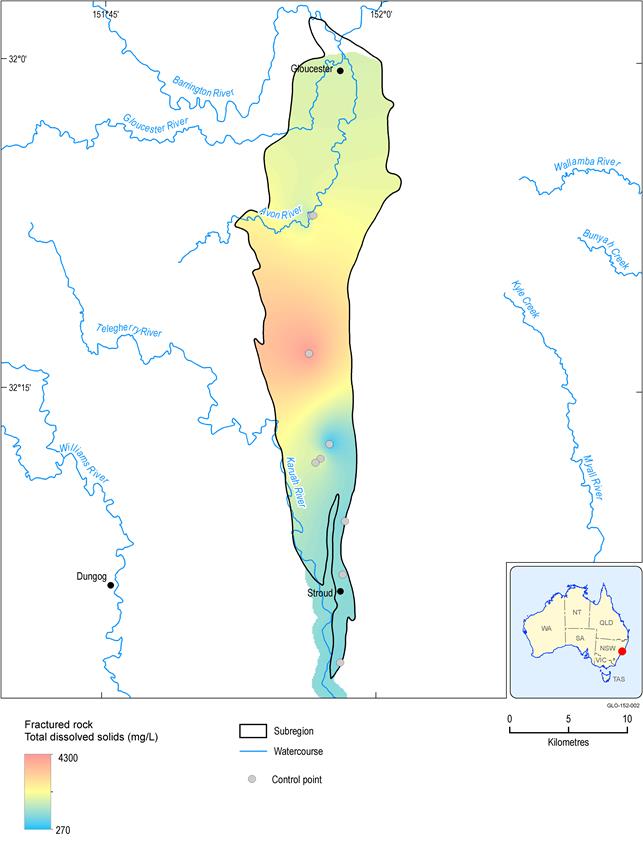 Bore coverage is poor for many hydrogeologic units, especially the interburden. This makes assessing the spatial distribution of water quality difficult, and requires assumptions about water quality over large areas with few control points.

A number of potentially harmful trace elements have been omitted from this product due to scarcity or absence of data. Some elements have data available for only one or two hydrogeologic units, while others have no data available at all. Where analyses have been performed several elements have concentrations above ADWG or NWQMS triggers, but the current dataset is too sparse to make any informed statement about trigger value exceedances of these elements. It is possible that hazards will go unidentified due to data scarcity. Further work defining the range and distribution of trace element concentrations in the subregion is required to fully understand the potential hazards they pose.