Water licence data for Gloucester were obtained from the Bioregional Assessment Programme (Dataset 1) and coordinate values were obtained from the NSW groundwater bore database (Bioregional Assessment Programme, Dataset 2). Figure 4 shows the distribution of water licence allocations to groundwater bores within the Gloucester subregion. The licensed water allocations represent the maximum amount that can be taken for a particular licence. The proportion of the licence entitlement extracted for consumptive purposes is not available. In the water licence database (Bioregional Assessment Programme, Dataset 1), for water access licences that cannot be linked to a works approval due to lack of specific location information, all remaining licences are aggregated to the corresponding water source location (polygon). This means bores without a location are aggregated and the associated volumes are assigned to their water source, such as a water supply or aquifer.

In total 175 bores have an allocated water licence attached to them. The total share components (a specified share or volume of water that can be extracted within a specified water management area) within the Gloucester subregion equates to 1864 ML/year and is drawn from 18 approved licences. About 25 ML/year of water is allocated for irrigation in the NSW Water Access Licence register whose spatial location is unknown and hence this volume is not considered in the estimation of total share components within the Gloucester subregion. Of the 1864 ML/year, some 50 ML/year of the allocated groundwater licence volume comes from a bore located in the Upper Gloucester River water source area (i.e. the catchment area for that particular water source (river)). Further information on the Upper Gloucester River water source is available in a NSW report (DPI, 2011).

The analysis of water accounts in the Gloucester subregion is restricted to water entitlements or licences and/or share data that is wholly and spatially contained within the subregion. NSW’s Water Sharing Plan for the Lower North Coast Unregulated and Alluvial Water Sources 2009 contains such data for a greater number of sources than contained within the Gloucester subregion and may not be directly comparable in all instances. 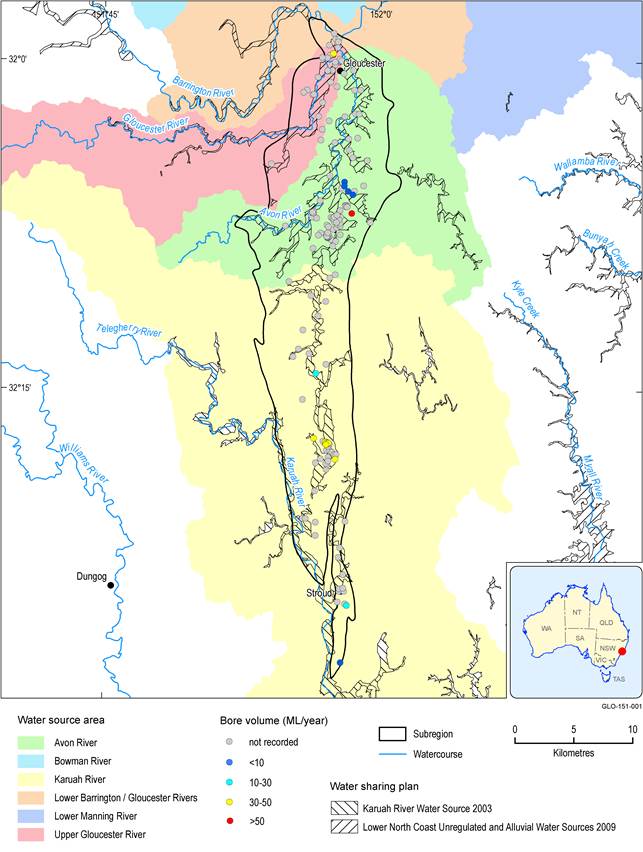 Not recorded means the licence does not specify a volume

An estimate of current groundwater usage

A groundwater bore may require a licence but may not be associated with a volumetric allocation and still operate under a groundwater licensing arrangement. Thus, groundwater licence allocations can under estimate the annual groundwater withdrawals from aquifer systems. A dataset for estimating yearly groundwater use from all bores, in ML/year, was compiled using the following steps:

Using the steps as described above, it was estimated that 2878 ML/year are extracted across the Gloucester subregion each year (Bioregional Assessment Programme, Dataset 3). Figure 5 shows the distribution of estimated groundwater usage per bore across the Gloucester subregion. Out of the 175 bores, 78 bores had neither recorded volumes nor discharge values. It is difficult to ascertain uncertainty for this estimate without having some actual groundwater usage data for comparison.

Groundwater withdrawals by proposed resource developments are not included in this estimate. However existing resource development – AGL Energy Limited, Stratford Coal Mining Complex and Duralie Coal Mine’s bores (Bioregional Assessment Programme, Dataset 3) – are considered in this estimate. Further detail on the water requirements for the existing and proposed coal and coal seam gas developments will be outlined in companion product 2.6.2 for the Gloucester subregion.

Figure 6 shows the distribution of bores for each purpose defined in the National Groundwater Information System (NGIS) bore database (Bioregional Assessment Programme, Dataset 2) across the subregion. Table 7 shows the number of bores broken down by the licensed purpose (Bioregional Assessment Programme, Dataset 1, Dataset 3). Commercial purpose was the largest user of groundwater at 1467 ML/year from five bores, followed by dewatering bores with an estimated volume of 522 ML/year from nine bores. As estimated volumes are calculated based on the bore yield values, they represent the maximum volume that can be extracted from the bore. A groundwater licence may have a yield which is greater than the licensed entitlement of the work and, as such, yield may not be the optimal measure of usage.

Table 7 Groundwater usage by licensed purpose for the Gloucester subregion

bMay also include stock and domestic

Table 8 shows the number of bores and an estimated volume withdrawn annually on a per aquifer basis. The largest estimated withdrawals on an annual basis occur from fractured rock groundwater-bearing units, followed by withdrawals from the alluvial aquifer system. Figure 7 shows the distribution of bores for each aquifer. 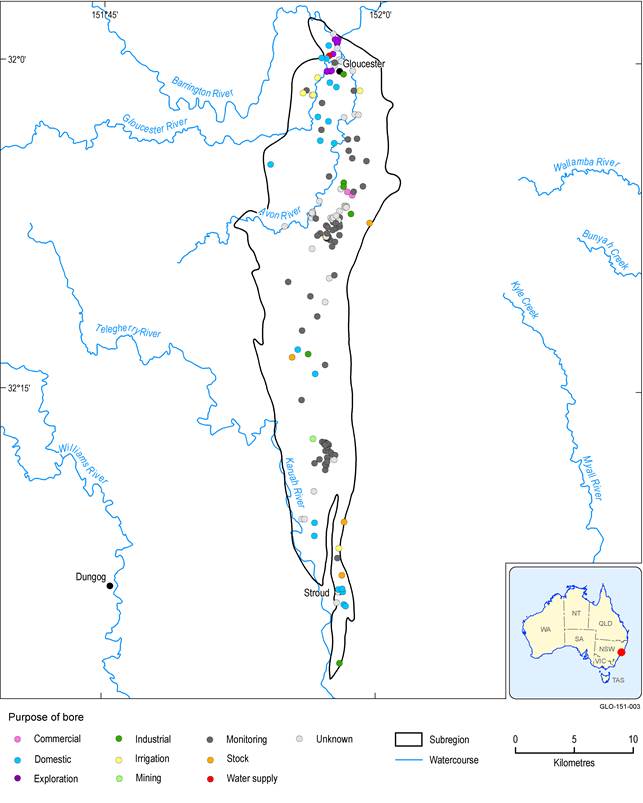 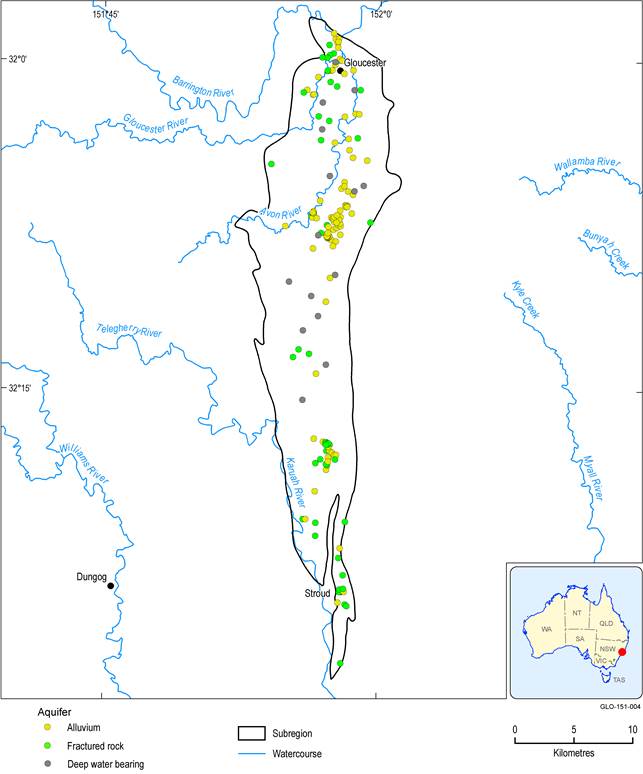 Water trades can only take place using a current water licence, for which the intended purpose is non-stock and domestic. There is provision in the Lower North Coast Unregulated and Alluvial Water Sources WSP for temporary and permanent trading (DPI, 2009). The NSW Office of Water provides data on water trades that occurred under the auspices of the WSP for the Lower North Coast Unregulated and Alluvial Water Sources between 1 July 2009 and 30 June 2014 (NSW Office of Water, 2015). These data suggest that there have been water trades in all the water source areas that lie within the Gloucester subregion. The data suggest that the majority of water transfers occurred under the unregulated river category.

Information on stratigraphy and screened intervals for all bores would improve the groundwater use estimates on a per aquifer basis.

For bores with water licences, if actual usage data were to become available this would assist in the provision of a more accurate representation of the distribution of groundwater use for some bores within the Gloucester subregion. Uncertainty of groundwater usage data will be considered in subsequent BA modelling products.