This product provides a baseline assessment of groundwater quality in the Galilee subregion with a focus on salinity, and information on selected trace elements. Water quality is assessed against national guidelines provided by the National Health and Medical Research Council (NHMRC/NRMMC, 2011) and the Australian and New Zealand Environment and Conservation Council (ANZECC/ARMCANZ, 2000).

Before an assessment of groundwater quality can be carried out it is necessary to have a conceptual understanding of hydrologic connectivity between different geological units. To assess the water quality of groundwater in the Eromanga and Galilee geological basins, which together comprise the subsurface geology of the Galilee subregion, geological units were grouped together into hydrogeologic units based on the current conceptual understanding of the hydrodynamics in the subregion (see companion product 1.1 for the Galilee subregion (Evans et al., 2014)). For the Eromanga Basin the hydrogeologic units determined are:

For the Galilee Basin the hydrogeologic units determined were:

Groundwater chemistry data for these hydrogeologic units were compiled from the Queensland groundwater bore database with some supplementary data from environmental impact statement (EIS) documents for coal developments in the Galilee Basin. Due to the potential for impacts on groundwater levels and quality to cross catchment divides, available groundwater data were considered for the entire subregion, rather than limiting the analysis to drainage boundaries within the subregion.

To assess the potential hazards associated with using groundwater in the subregion, groundwater chemistry data were compared to national guidelines for water quality in which a number of possible water uses were considered: human drinking water, stock drinking water and water for long-term irrigation (defined as up to 100 years).

Groundwater chemistry data were primarily collated from the Queensland groundwater database (Department of Natural Resources and Mines, 2014). This database contains data from bores drilled from the early 1890s through to the present. Over the decades there have been significant changes in how data from drill-holes are collected, as well as refinements in the general knowledge of the hydrogeology of the subregion. This can have implications for data quality.

In total, data for 5675 samples were available for the Galilee subregion. Of these, 4624 had sufficient stratigraphic data for a sample to be assigned to a hydrogeological unit. All samples had data for total dissolved solids (TDS), but only a fraction of samples had trace element analyses. The number of analyses for trace elements is discussed in Section 1.5.2.2.3.

TDS trigger values were determined using ADWG values for human consumption and the NWQMS for stock water. The trigger values used for TDS are given in Table 12.

The range of TDS values in the dataset is shown in Table 13. The proportion of samples in exceedance of the different guidelines used can be seen in Table 14. TDS is highly variable in the subregion, with all hydrogeological units showing at least an order of magnitude difference between minimum and maximum values. Median values indicate that most groundwater in hydrogeologic units is appropriate for use as stock water, and water in many hydrogeologic units is appropriate for human consumption (on the basis of TDS). Relatively few units have a median below the threshold for irrigation water. Further discussion of the processes controlling TDS values and their implications will be provided in companion product 2.1 and companion product 2.3 for the Galilee subregion.

Total dissolved solids data for groundwater from bores were used to generate salinity trend maps for the aquifer groups. TDS are routinely measured in the lab as part of a groundwater sample analysis. This differs from EC, which is often used as a measure of salinity in the field.

The salinity trend maps were generated using the ‘topo to raster’ interpolation method in ArcGIS. This is an iterative finite difference interpolation technique, which allows for surface continuity in sparse datasets. The available salinity data does not represent a single snapshot of water quality at a specific time; rather they provide a general indication of variations in salinity across the subregion. Furthermore, there is likely to be variations in quality of the sample analyses used to create the maps due to the archival nature of the data. Factors affecting archival data can include: use of different analysis methods; improvements in analyses technology over time; analysis accuracy and precision; variations in sample collection methodologies, and different bore construction techniques and quality. The archival nature of the data used means that temporal variation in water chemistry may contribute to the range of values seen in the TDS surfaces. However, the total variability in TDS for each hydrogeologic unit is at least one, and sometimes up to three, orders of magnitude difference, thus any temporal variations are likely to be minor in comparison to spatial variability.

As a quality control measure, some bore data were excluded from construction of these surfaces. Where a single bore had groundwater with high TDS that was anomalous in relation to other bores nearby, or where a single bore had high groundwater TDS with no controls nearby, these bores were excluded from generation of the TDS surfaces. Anomalously high TDS values may represent bores where stratigraphic or screened interval information are suspected to be incorrect, where sample contamination has occurred, or where there were errors in analysis.

Distribution of bores is often limited to within the vicinity of outcrop areas. Results may also be skewed in part through clustering of bores in areas where there is high production due to the presence of relatively fresh water, or alternatively areas with higher salinity are likely to have fewer bores to constrain interpolation. Interpretation of the TDS surfaces should be considered with these uncertainties in mind, and these maps should be treated as an image of regional trends in salinity for the hydrogeologic units in the subregion rather than a predictive tool for determining water quality where there is little bore coverage. It should also be noted that TDS for each hydrogeologic unit is displayed with a different colour gradient dependent on the range of TDS in each hydrogeologic unit, meaning direct comparisons between the maps cannot be made. Using a single scale for all maps would have allowed for comparison between the different hydrogeologic units, but the variability in TDS of the fresher units would not be visible due to the very high TDS values in more saline units.

Groundwater in the Allaru-Wallumbilla grouping is generally fresh in the north and central parts of the subregion, with some areas of higher salinity (up to 12,654 mg/L TDS) away from outcrop areas around Charleville and on the Maneroo Platform (Figure 13). 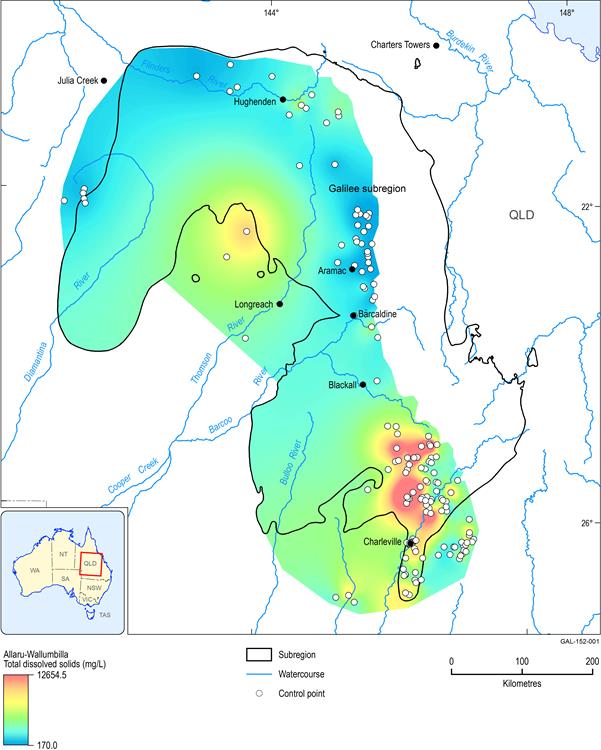 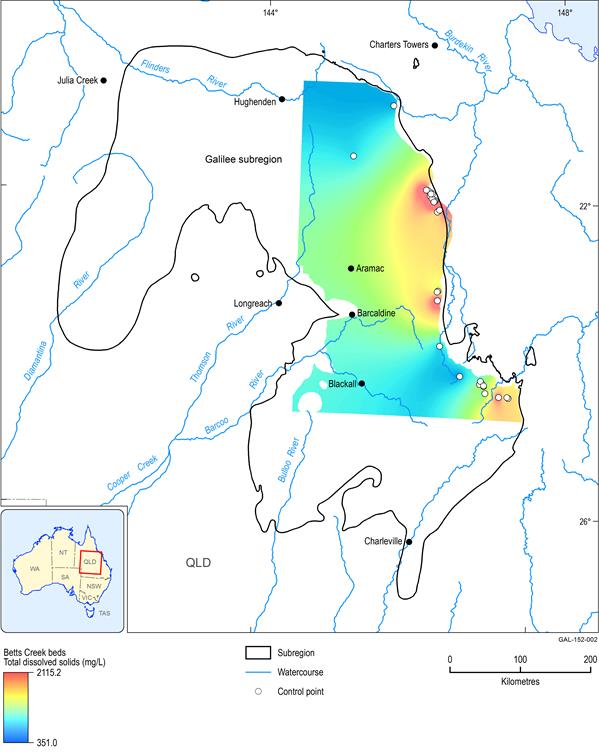 Groundwater in the Clematis-Warang Sandstone is generally fresh to brackish, with an area of higher salinity in the central part of the subregion, just east of Aramac (Figure 15). 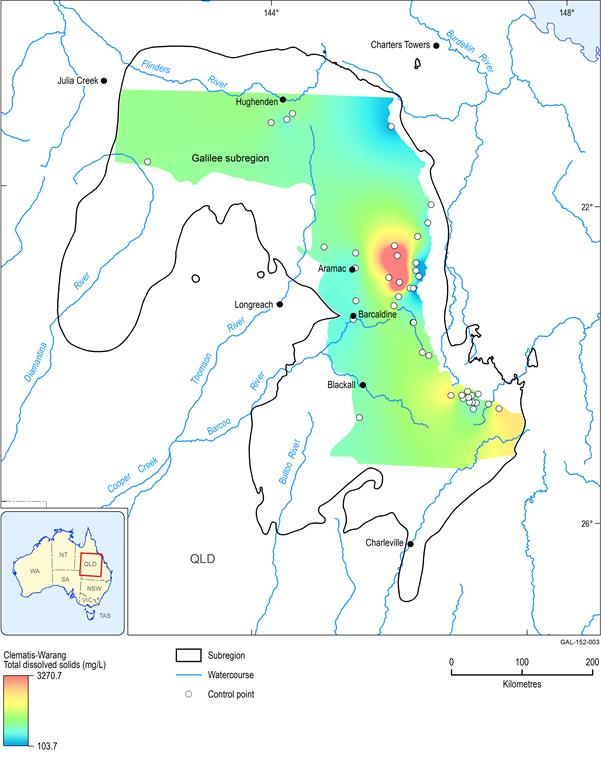 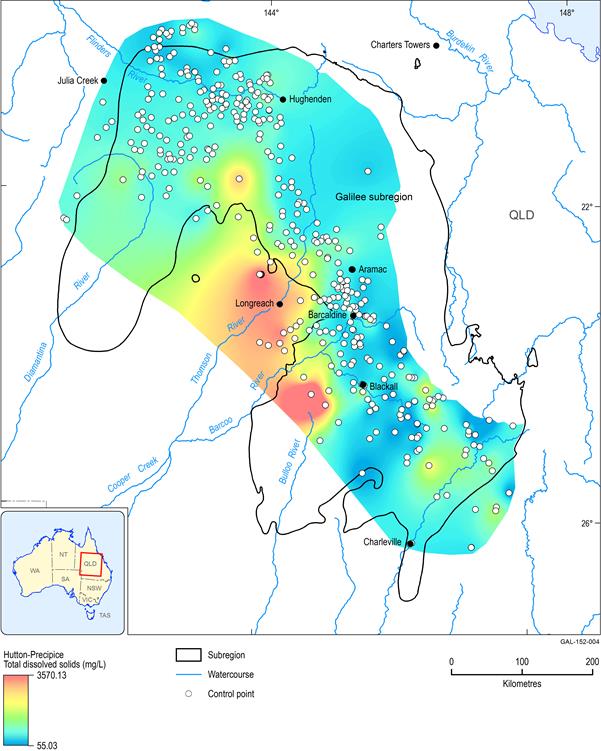 Groundwater in the Westbourne-Birkhead grouping is relatively fresh near recharge areas around the eastern margin, with higher salinity areas occurring to the west, on the Maneroo Platform, and in the north of the subregion (Figure 17). Small saline areas, for example in the south-east, around single bores may be due to mis-assigned bores, sample contamination or inter-aquifer leakage. 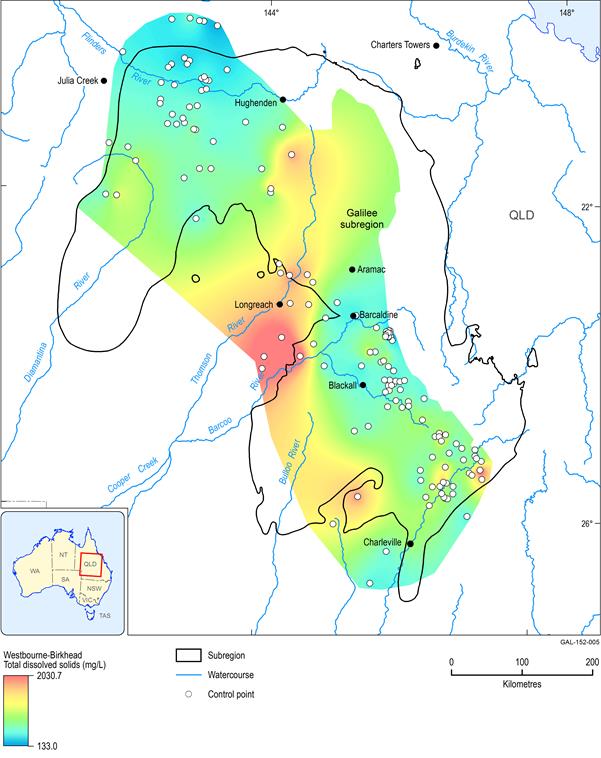 Groundwater in the Winton-Mackunda Formation has variable TDS, with higher salinities occurring around the Maneroo Platform and in the south of the subregion (Figure 18). 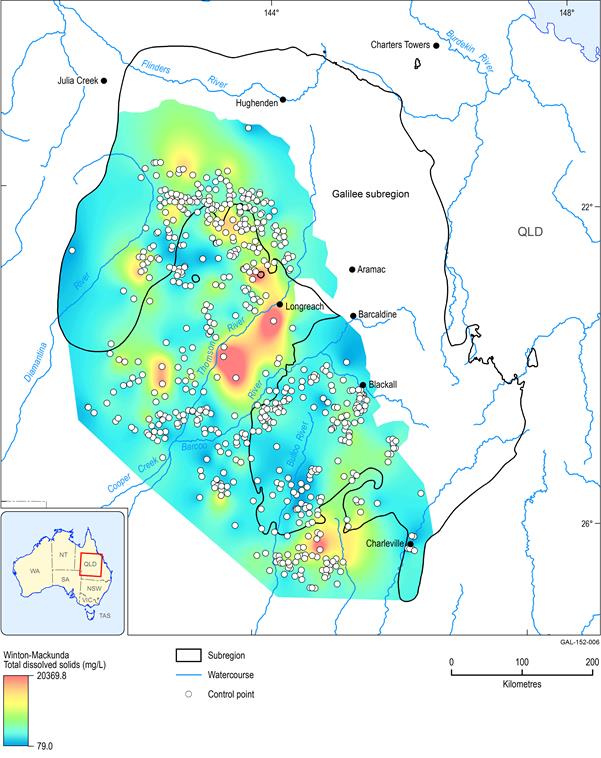 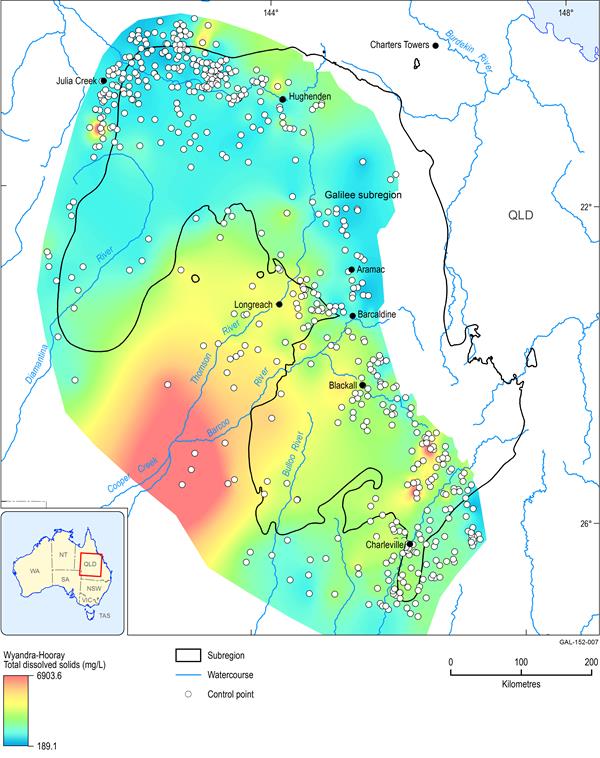 There are few samples available for many of the hydrogeologic units, in particular the Betts Creek beds and the Clematis-Warang Sandstone. This makes assessing the spatial distribution of water quality difficult, and requires assumptions about water quality over large areas with few control points.

Where analyses have been performed several elements have concentrations above ADWG or NWQMS triggers, but the current dataset is too sparse to make any informed statement about trigger value exceedances of these elements. It is possible that hazards will go unidentified due to data scarcity. Further work defining the range and distribution of trace element concentrations in the subregion is required to fully understand the potential hazards they pose.

The Queensland Department of Environment and Heritage Protection is establishing environmental values and water quality objectives under the Environmental Protection (Water) Policy 2009 for all Galilee subregion surface and groundwaters, including the Burdekin river basin (including the Belyando, Suttor, Cape and Bowen sub-basins), the Flinders river basin and Thomson and Barcoo rivers sub-basins during 2015 and 2016 (J Fewling (EHP), 2015, pers. comm.).

Summary and download
1.5 Current water accounts and water quality for the Galilee subregion