A total of 87 sociocultural assets were nominated in the asset list for the Arckaringa subregion. Eighty of those asset nominations were sourced from the Australian Heritage Database (Department of the Environment, 2015; Bioregional Assessment Programme, Dataset 1), comprising 76 assets from the Register of the National Estate (RNE) and 4 assets from the National Heritage List. In addition, 7 assets were nominated by the SA Arid Lands Natural Resource Management Board through the Water Asset Information Tool (WAIT) (Bioregional Assessment Programme, Dataset 1). Of these, 72 assets were considered to be water dependent and were included in the water-dependent asset register. No additional sociocultural assets were nominated at the Arckaringa asset workshop in Adelaide in March 2015.

Table 11 shows the breakdown of water-dependent sociocultural assets by dataset, subgroup and class. The geographic locations of the assets are shown in Figure 20. There are 55 assets in the ‘Cultural’ subgroup and 17 assets in the ‘Social’ subgroup. Forty-six assets are classed as Indigenous sites. In the north, east and south of the Arckaringa preliminary assessment extent (PAE), several large assets intersect with only a small part of the PAE and extend far beyond the boundaries of the PAE. During subsequent stages of the Bioregional Assessment Technical Programme, impact will only be assessed for those parts of such assets that lie within the Arckaringa PAE. 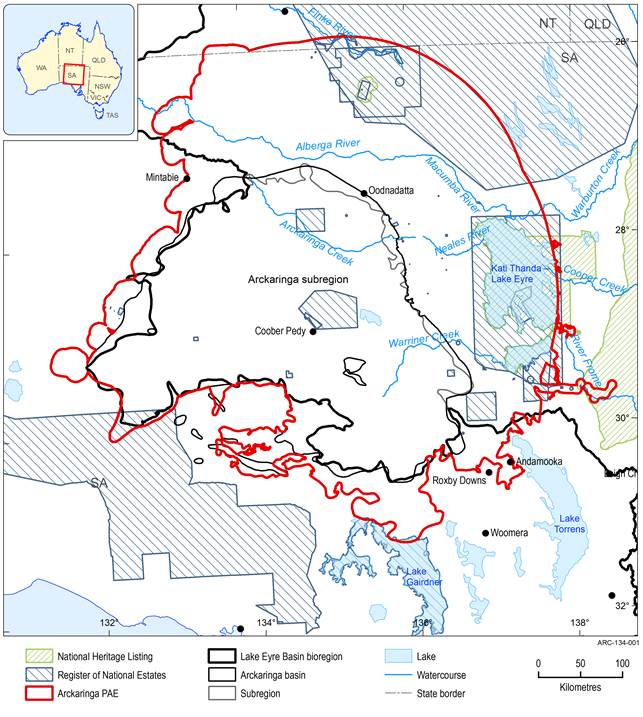 The four assets from the National Heritage List: the Birdsville and Strzelecki Tracks area, Dalhousie Springs, Freeling Springs and Lake Eyre National Park are all areas that have natural values and are partly or entirely protected under national and/or state conservation legislation. These sociocultural assets were also nominated as ecological assets.

Three of the five assets sourced from the RNE that are classed as heritage sites are also natural areas that have federal or state-level conservation designations (Elliot Price Conservation Park, Kati Thanda – Lake Eyre and the Simpson Desert). They were also nominated as assets from other databases that were classified as containing ecological assets and depend on surface water, at least in part. Elliot Price Conservation Park is also groundwater dependent.

The remaining assets sourced from the RNE and classed as a heritage site (Emu Field and Strangways Springs) are historical places. Emu Field was the site of tests of nuclear weapons in 1953 (Commonwealth of Australia, 1985). It was assessed as water dependent in part, on the basis of the remotely sensed data layers. Strangways Springs was an active part of the Overland Telegraph Line from Adelaide to Darwin during the 19th century. It was assessed as water dependent because it is located near a complex of Great Artesian Basin discharge springs, after which the telegraph station was named.

The water-dependent asset register includes 46 Indigenous sites sourced from the RNE and the SA WAIT database. Other than the name and location of the asset, very little information was available to assess water dependence. Hercus (2009) described locations with similar or related names in northern SA and associated many of those locations with waterholes and rockholes. On the basis of this naming information and the secondary analyses through intersections with remotely sensed data sources, and applying the precautionary principle in each case, all of these Indigenous sites are likely or possibly dependent on surface water, and all but one site may also be dependent on groundwater.

Summary and download
1.3 Water-dependent asset register for the Arckaringa subregion