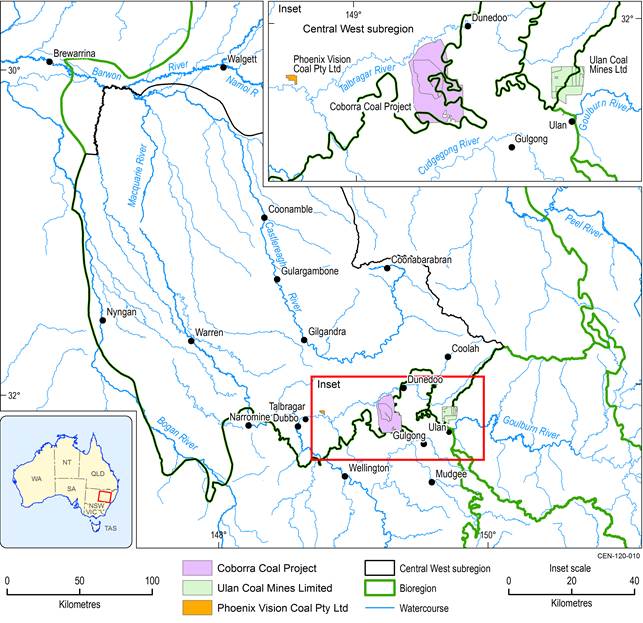 UCML, owned by Glencore, straddles the Great Dividing Range and includes parts of several catchments (detailed in Ulan Coal, 2012, p. 37) (Figure 5). UCML has extended its mining activities within this complex recently as part of a 21-year conceptual plan for the Ulan Mine Complex (Project Approval 08_0184 under Part 3A of the Environmental Planning and Assessment Act 1979) known as the Ulan Continued Operations Project (NSW Department of Planning, 2010, p. 2; Umwelt, 2011, p. 1). In addition to its mining leases, Glencore owns ELs 5573 and 7542 which are situated at Ulan No. 3 underground and Ulan West respectively. The mining complex has multiple operations all existing within the site and the recent ‘Continued Operations Project’ is now largely operational. Previously a concrete batching plant was proposed and approved but construction is not presently planned (B Anderson (Glencore), 2014, pers. comm.).

Ulan No.3 is expected to progress northwards for up to 18 years (NSW Department of Planning, 2010, p. 9). Approximately 19 Mt of coal will be mined underground from the Ulan Seam using longwall methods, at depths of 30 to 110 m below ground (NSW Department of Planning, 2010, p. 9). Access to Ulan No. 3 underground mine will be via an existing road off Ulan Road, about 6.6 km north of the Cope Road junction (NSW Department of Planning, 2010, p. 9). Modifications will allow continuation of mining at Ulan No. 3. No additional water sources will be sought at the mine for the progression of Ulan No. 3 as UCML currently generates water in excess of its operational requirements, predominantly sourced from underground dewatering and surface collection from disturbed ground (Umwelt, 2009, p. 2.16).

The coal target for the Cobbora Coal Project (CCP) is from the Gunnedah Basin, specifically the Dunedoo Formation. The main target seams are the Flyblowers Creek Coal and Ulan Upper and Ulan Lower seams (EMGA Mitchell McLennan, 2012, p. ES.5, 35).

Water demand will be up to 3700 ML per year both for dust suppression and for processing coal at the coal handling and preparation plant (EMGA Mitchell McLennan, 2012, p. ES.7). Most water used will be surface water and water from within the mine in line with condition 29 of the Project Approval (NSW Government DPE, 2014. P. 14). Up to 3310 ML of water per year may be used, if required, allocated under the project’s high security water access licences from the Cudgegong River, but without affecting town or domestic and stock supplies (EMGA Mitchell McLennan, 2012, p. ES.7).

In May 2014, NSW Government approved the Cobbora Coal Project plan (NSW Planning Assessment Commission, 2014; Cobbora Holding Company Pty Limited, 2014). Commonwealth approval for the project was given on 10 July 2014 (Department of the Environment, 2014). Detailed conditions, including environmental conditions for approval have been identified (NSW Government DPE, 2014; Department of the Environment, 2014). Conditions include that: the proponent shall not extract more than 20 Mt of ROM coal from the site in any calendar year; operations will not transport more than 12 Mt of coal from the site in any calendar year; and operations may be carried out on the site for a period of 24 years from the commencement of site construction. On 6 August 2014, NSW Government called for expressions of interest (EOI) for purchase of Cobbora Coal Mine, and the EOI remains open to prospective bidders until early September 2014 (NSW Government, 2014).