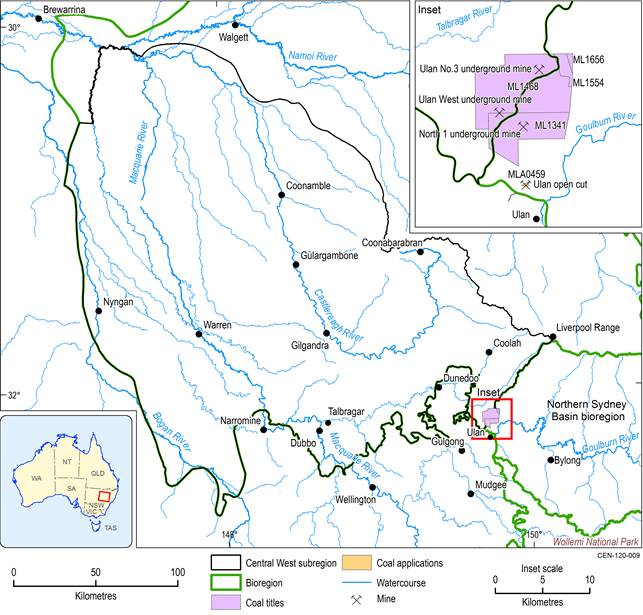 Part of the Ulan No. 3 mine site is outside of the Central West subregion, including the currently mined area. However, for the purposes of this report all of the Ulan Mining Complex is discussed, even though the subregion boundary runs through the mine complex (Figure 4).

UCML is a joint venture between Xstrata Coal Pty Limited (90%) and Mitsubishi Development (10%) (Umwelt, 2011). Xstrata Coal is wholly owned by Glencore. UCML operates the Ulan Mine Complex, in the Western Coalfields of NSW, approximately 38 km north-north-east of Mudgee (Figure 4) and 19 km north-east of Gulgong (Figure 4) (Umwelt, 2011, p. 1). Mining in the Ulan area has taken place since the 1920s (Umwelt, 2011, p. 1) when Ulan No. 1 Colliery supplied coal to local markets for a short period and then from 1942 to 1950, supplying coal to a power station north of Ulan Village and to other local markets (Ulan Coal, 2013). The power station closed in 1969. Ulan No. 2 continued to supply coal from the underground mine to local markets and additional coal was extracted from an open-cut mine established in the 1980s. Ulan No. 3 commenced in 1986 both as underground and open pit mining (Ulan Coal, 2013).

UCML currently hold 13 mining and exploration leases for the Ulan Mine Complex situated partially within the Central West subregion (Umwelt, 2011, p. 4.1): four of the leases cover existing activity. Ulan Mine Complex has two approved underground mining operations (Ulan No. 3, currently in operation, and Ulan West, which commenced production of longwall coal in May 2014) and an open-cut operation (Umwelt, 2011, p. 2.1). The Ulan Mine Complex is at the western limit of the Sydney Basin (Figure 3) and the southern end of the Gunnedah Basin (Figure 3). At the complex, ten coal seams occur within the Permian Illawarra Coal Measures (see Figure 21 in companion product 1.1 for the Central West subregion (Welsh et al., 2014)), eight above the Ulan coal seam and one below. The seams range in thickness from 0.4 to 10 m, with Ulan coal seam being the thickest (Umwelt, 2011, p. 1.4). Only the lowest 3 m of the Ulan coal seam are removed from the underground mine due to its high quality and as a result, only approximately 30% of the coal requires washing (Ulan Coal, 2013). The water balance for the Ulan Mine Complex for 2012 reported that intercepted water sources including rainfall on dams and ponds was 384 ML and runoff from catchments was 1615 ML, although detail per mine/pit was not available (Xstrata Coal, 2013).

Ulan No. 3 underground mine

Mining at Ulan No. 3 is performed through longwall mining methods using continuous miners and shuttle car operation (Ulan Coal, 2013). Coal is moved by conveyor to the surface where the higher-ash coal is moved by truck and conveyor to the wash plant. Coal that does not require washing is crushed and prepared for transport offsite (Ulan Coal, 2013). When coal is ready for transport it is loaded at a dedicated loading facility for rail to both domestic markets and for export via the Port of Newcastle (Umwelt, 2011, p. 2.1). The complex currently operates 24 hours per day, seven days a week (Umwelt, 2011, p. 2.1), with onsite facilities including mine ventilation and power supply infrastructure, fuel storage and workshops, administration buildings, tailings emplacement areas, overland and underground conveyors, stockpiles, processing and sizing stations, mine access, service boreholes, water management infrastructure, communications infrastructure, access roads and monitoring equipment (Umwelt, 2011, p. 2.1–2.2).

Coal is of high quality with low sulfur, nitrogen and phosphorous providing good handling and combustion properties (Ulan Coal, 2013). Most coal is sold as thermal coal in the export market but some higher-ash content coal is supplied to the domestic market for power generation (Umwelt, 2011, p. 1.6).

The North 1 underground mine was identified in Ulan Coal Mines Continued Operations Project as a separate underground operation with longwall panels in an area that had not been previously mined, adjacent to (on the western edge of) an area that was mined in the early 1990s (Umwelt, 2011, p. 3.1). Since that time, this has now been largely mined and is considered to be part of the Ulan No. 3 underground mine area, and not a separate entity (B Anderson (Glencore), 2014, pers. comm.).

In December 2010, open-cut mining recommenced at the Ulan Mine Complex across 239 ha adjoining the previous open-cut mining area approved for highwall mining (Umwelt, 2013, p. 2.2). Access to the Ulan Open Cut extension is via an existing road off Ulan Road approximately 1 km north of the Cope Road junction (NSW Department of Planning, 2010, p. 9). Coal from the open‑cut area is hauled by truck from the pit to a crushing facility onsite and then moved by conveyor to the coal handling and preparation plant (Ulan Coal, 2012, p. 57) before stockpiling and transporting offsite. Coal rejects are stockpiled onsite and used for backfilling (Ulan Coal, 2012, p. 59). Approximately 158 ha of vegetation may be disturbed during construction and mining of the Ulan Open Cut extension (Ulan Coal, 2012, p. 34). Topsoil will be used for other areas undergoing rehabilitation or will be stockpiled for future rehabilitation. Minimal soil handling will be performed to reduce soil structure degradation (Ulan Coal, 2013). Overburden is blasted to fracture and aid its removal by dragline or excavator and truck to expose the Ulan Seam (Ulan Coal, 2013). The coal is crushed and then transported by overland conveyor, stockpiled and then further transported by conveyor to the coal handling and preparation plant, which has been upgraded to allow 20 Mt/year of coal to be processed (NSW Department of Planning, 2010, p. 9). Coal is stockpiled before being transported by rail to the Port of Newcastle or to domestic customers as required (Ulan Coal, 2013).

Ulan West underground mine is expected to continue for another 21 years (NSW Department of Planning, 2010, p. 9). Approximately 126 Mt of coal from the Ulan Seam will be mined at Ulan West at depths of 80 to 225 m below surface (NSW Department of Planning, 2010, p. 9). Ulan West underground mine surface water management infrastructure includes water treatment facilities and piped services. Storage for potable water, mine wastewater, processing and fire water supply and other storage such as air, nitrogen and diesel have been developed along with a rail refuelling facility (Umwelt, 2011, p. 2.3, Ulan Coal, 2013).