The dominant land use in the Gwydir subregion is agriculture based around a mixture of cropping and grazing (Figure 9).

The eastern half of the Border Rivers and Gwydir river basins comprises the ranges and foothills of the Great Dividing Range with elevations from 1500 m to 500 m. The western regions of these river basins comprise flat alluvial plains characterised by numerous anabranches and effluents where the elevation is less than 200 m. There are three distinct landform types across the former Border Rivers-Gwydir Catchment Management Authority area: the tablelands in the east, the slopes further inland and the plains in the western portion. The tablelands are mostly upstream of the Gwydir subregion. The climate grades from temperate (cooler and wetter) in the east of the river basins, to subtropical (hotter and drier) in the west.

The Gwydir – Border Rivers region includes four Interim Biogeographic Regionalisation of Australia (IBRA) regions (OEH, 2011): New England Tablelands, Brigalow Belt South, Nandewar and Darling Riverine Plains. The Gwydir subregion largely excludes the tablelands in the east and excludes all of the Queensland portion of the Border Rivers river basin. The focus of this report is the ecology of the slopes and plains. Table 16 provides a brief overview of the major landforms and biodiversity values across the three IBRA regions that are in the Gwydir subregion.

The western portions of the Border Rivers and Gwydir river basins contain approximately 1600 km2 of seasonal, semi-permanent and permanent wetlands and lagoons, some of which are internationally recognised under the Ramsar List of Wetlands of International Importance (Green et al., 2012; Green et al., 2011) (Figure 31). There are numerous protected areas covered by local and state reserve systems within the Gwydir subregion (Department of the Environment, 2010) and no national parks. Invasive species were recognised as the key problem in the Border Rivers-Gwydir river basin in a 2007 to 2008 survey. Invasive biota recognised as a major or moderate problem included environmental weeds, introduced animal pests, crop weeds and native pests (Marsh, 2010). 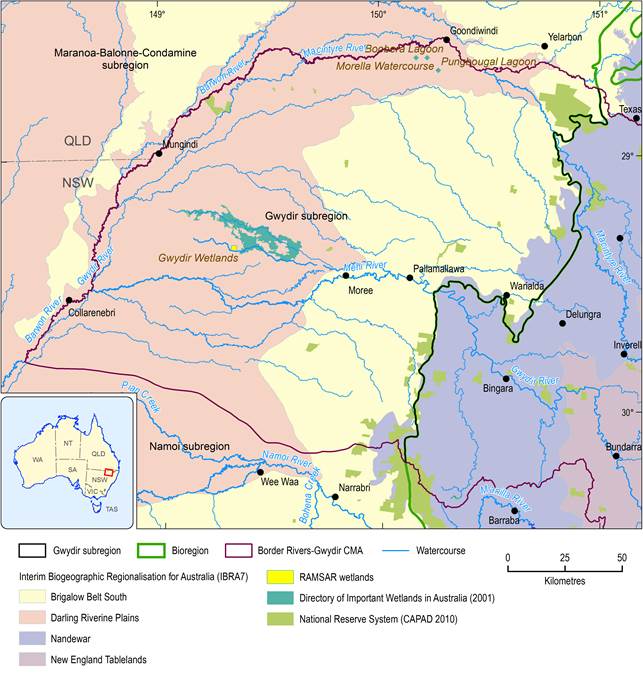 Source data: Department of the Environment (2013b) ©Commonwealth of Australia 2013

There are many state and nationally listed threatened species found in the subregion listed under the New South Wales Threatened Species Conservation Act 1995, and the Commonwealth’s Environment Protection and Biodiversity Conservation Act 1999 (EPBC Act). The state listed species include amphibians (one species), mammals (19 species), reptiles (five species), birds (37 species), fish (four species) and plants (28 species). The six species listed as endangered under the EPBC Act include the regent honeyeater (Xanthomyza phyrgia), Australian painted snipe (Rostratula australis), spot-tailed quoll (Dasyurus masculatus asculatiusm (s lat.)), Lake Keepit hakea (Hakea pulvinifera) and Tylophora linearis. An additional 23 species are listed as vulnerable under the EPBC Act. Table 17 documents the ten threatened ecological communities of the Gwydir subregion under the New South Wales Threatened Species Conservation Act 1995, the majority of which are also listed under the Commonwealth’s EPBC Act. Current threats to the existing extent and condition of these communities include land clearing, effects from weeds and feral animals, grazing by domestic livestock and the effects of fertiliser. Details on nationally and internationally significant aquatic ecosystems are described in the next section.