The Bowen, Gunnedah and Surat basins are intracratonic, coal-bearing sedimentary basins of significant size and coal and coal seam gas resource potential (Cadman et al., 1998; O’Neill and Danis, 2013). The elongate, north-trending Bowen Basin spans about 200,000 km2 of central and southern Queensland and extends into northern NSW (Cadman et al., 1998). The Gunnedah Basin covers approximately 15,000 km2 of NSW, but is part of the larger depositional complex that includes the Bowen Basin to the north and the Sydney Basin to the south (Tadros, 1993; O’Neill and Danis, 2013). Consequently, there are many geological similarities between the Bowen and Gunnedah basins. The boundary between the Bowen and Gunnedah basins occurs in the Gwydir subregion, south of the Moree High (Totterdell et al., 2009).

The Surat Basin is the largest of the three basins by area and covers approximately 300,000 km2 of central and southern Queensland and northern NSW. The Surat Basin structurally and stratigraphically overlies much of the southern Bowen Basin and most of the Gunnedah Basin, and also extends beyond the subsurface boundaries of both of these older basins (Exon, 1976).

The Bowen and the Surat basins have no formally recognised sub-basins, although both are commonly sub-divided into distinct structural regions, which are associated with specific stratigraphic sequences. In the Gwydir subregion, the southern extent of the Taroom Trough is the main structural domain of the Bowen Basin. In the overlying Surat Basin, this subregion contains the southern Mimosa Syncline region, also known as the Boomi Trough in NSW. The northern part of the Coonamble Embayment in the Surat Basin may also fall within the Gwydir subregion; however, there is uncertainty in the basin and subregion boundaries.

The sedimentary thickness of the Bowen and Surat basins varies significantly across each area, and in places some units of the basin-wide stratigraphic package are thin or absent (Exon, 1976; Cadman et al., 1998). As displayed in Figure 18, the maximum depth to underlying basement of the sedimentary basins in the Gwydir subregion occurs in a northerly trending elongate depression that cuts through the central and eastern part of the subregion, coincident with the southern extension of the Taroom Trough in the Bowen Basin. The Surat Basin strata in the northern Gwydir subregion have a maximum thickness of 1200 m, but this thins significantly towards the southern edge where there are only a few hundred metres of Surat Basin rocks (Hawke and Bourke, 1984). The entire Gunnedah Basin sequence is up to 3 km thick, and is unconformably overlain in places by up to 180 m of Early Jurassic volcanic rocks known as the Garrawilla Volcanics (Danis et al., 2010; O’Neill and Danis, 2013). 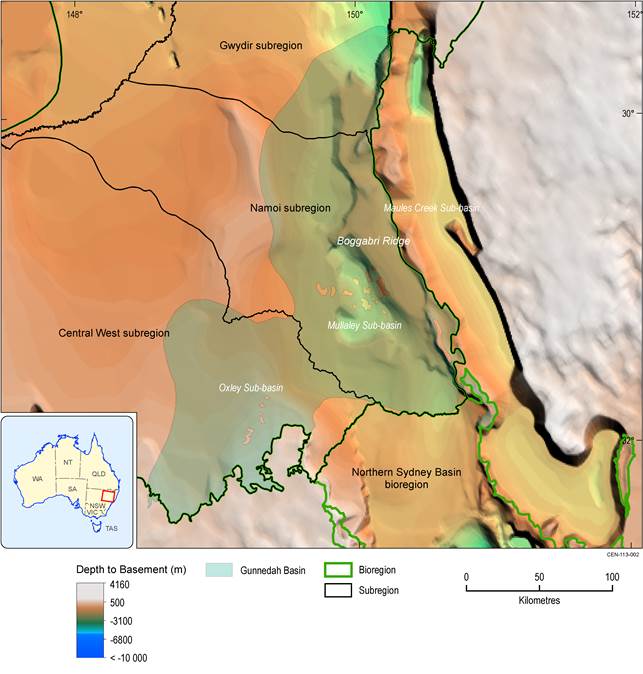 Figure 17 Division of the Gunnedah Basin into sub-basins 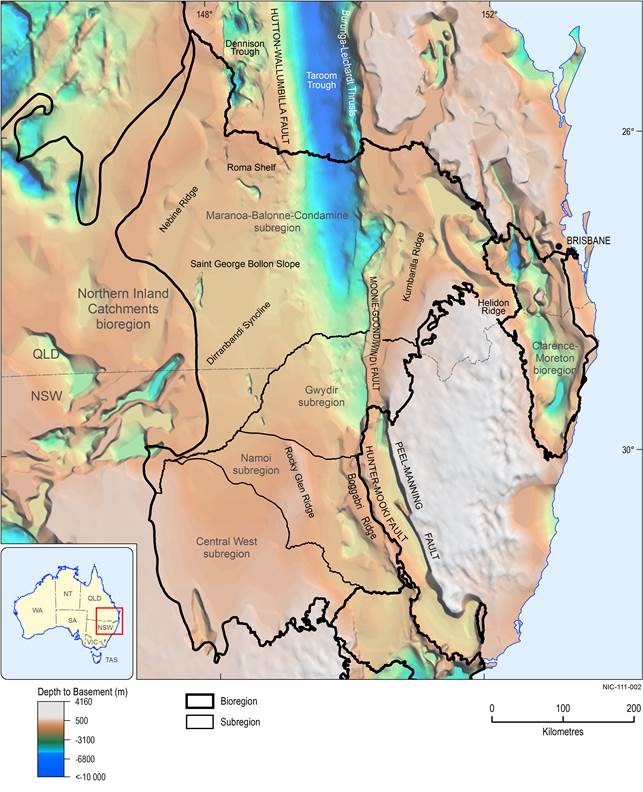 The Gunnedah Basin is separated from the Bowen Basin to the north in the Gwydir subregion along a zone of uplifted basement rocks within the vicinity of the Moree High and the Narrabri High (Tadros, 1993; Totterdell et al., 2009). The southern Gunnedah Basin, which lies outside of the Gwydir subregion, is separated from the Sydney Basin by the Liverpool Ridge, Mount Coricudgy Anticline and a line between the towns of Coolah and Dunedoo over the Quirindi Anticline (Beckett et al., 1983; Tadros, 1993; Guoping and Keene, 2007; Danis et al., 2010; O’Neill and Danis, 2013).

The sedimentary rocks of the Gunnedah Basin rest unconformably on Early Permian basal volcanic sequences (O’Neill and Danis, 2013). The Boggabri Ridge (Figure 17) was a leading source of sediment for the basin, but also acted as the structural barrier between the Maules Creek and Mullaley sub-basins (Figure 17) (Danis et al., 2010; Ward and Kelly, 2013). The Gunnedah Basin is bounded by the Lachlan Fold Belt and Rocky Glen Ridge to the west and the New England Fold Belt to the east, along the line of the Hunter-Mooki Fault (Figure 18) (Tadros, 1993; Danis et al., 2010; O’Neill and Danis, 2013; Ward and Kelly, 2013). A small segment of the northern part of the Peel-Manning Fault (Figure 18) also coincides with the Gwydir subregion.

The Moonie-Goondiwindi Fault and the Burunga-Leichhardt Thrusts (Figure 18) are major basement thrust fault systems that extend into the Surat Basin from the underlying Bowen Basin (Exon, 1976; Rohead-O’Brien, 2011). The most dominant structural feature in the Surat Basin part of the Gwydir subregion is the Mimosa Syncline, a reflection of the Bowen Basin’s Taroom Trough. This structure forms the major depositional zone of the Surat Basin, and contains the greatest thickness of sedimentary infill (McKellar, 1998; Yago, 1996; Fielding et al., 1993). The Mimosa Syncline is commonly referred to as the Boomi Trough within the NSW portion of the Surat Basin.