It is difficult to put an exact figure on the population of the Central West subregion as the area does not align well with the more usual reporting areas (river basins, local government areas (LGAs), statistical local areas, etc.). The subregion contains significant parts of the Bogan, Coonamble, Dubbo, Gilgandra, Narromine, Walgett, Warren and Warrumbungle LGAs, with small segments of Wellington, Parkes, Lachlan, Mid-Western Regional, Upper Hunter and Brewarrina LGAs. The 2011 Population Census for the eight larger LGAs gives a combined population almost 79,000 people, of whom 51% (40,500) live in the Dubbo LGA. Coonabarabran (2575), Narromine (3790), Coonamble (2445), Gilgandra (2665) and Warren (1525) urban centre localities (ABS, 2011) account for another 9200 (12%). The population density varies from 11.8 persons/km2 (Dubbo LGA) to 0.2 persons/km2 (Bogan and Walgett LGAs).

In the Australian Bureau of Statistics (ABS, 2011) census, 12 to 14% of the population in the Dubbo, Gilgandra, Warren and Bogan LGAs indicated they were of Indigenous origin, with a slightly lower proportion (9%) in the Warrumbungle LGA. In Narromine, Walgett and Coonamble, Indigenous people comprise 20%, 28% and 30% of the population, respectively.

Results of a survey of economic sustainability and social wellbeing in the Macquarie, Castlereagh and Bogan river basins, taken as part of the NSW State of the Catchments reporting (NSW DECCW, 2010e), showed that economic sustainability and social wellbeing vary across the region. Respondents considered regional centres and the upper catchment (that is, outside of the subregion) to be faring well, while Indigenous communities were faring less well. There were concerns about the declining number of people in commercial agriculture (10% decline in employment between 1996 and 2006), the rising costs of farm inputs and reduced farm incomes and rural subdivisions impinging on agricultural land. Mining was seen as beneficial for the local economy, but creates greater competition for water and farm labour.

Approximately 32,450 people are employed in the eight main LGAs in the Central West subregion. Table 4 summarises the main sectors of employment for the subregion (based on national regional profile data by LGA (ABS, 2011)). 15% of the employed population work in agriculture[2], although if Dubbo town is excluded from the statistic, it is closer to 30% across the subregion. In Dubbo, health care and social services, retail, education and training and public administration and safety account for 44% of employment. These sectors account for 36% of employed people in the wider area. Mining accounts for 1.4% of regional employment.

Regional tourism figures for the Central West region (DNSW, 2013) report that in 2012 visitors to the region brought in $1.136 billion. The reporting region for this figure is considerably wider than the subregion and includes Lachlan river basin and the Upper Macquarie catchment, in which towns like Bathurst, Orange, Mudgee and Cowra would command a significant proportion of that revenue. For the four years to September 2011, the Dubbo LGA averaged $175 million/year from visitors, Warrumbungle LGA averaged $36 million, Walgett LGA $30 million, and Gilgandra LGA $11 million (DNSW, 2013).

Table 4 Employment profile for the Central West subregion, expressed by sector as percentage employed. Data are from the National Regional Profile 2007 to 2011

Three land use zones can be distinguished in Figure 9 . In the north-west, around the Macquarie Marshes, grazing on natural vegetation dominates production systems. Through the central subregion, grazing on modified pastures and cropping systems intermingle, with grazing on modified pastures becoming more dominant in the east and around Nyngan. In the eastern third, grazing on modified pasture lands predominates, but with extensive areas of minimal use lands. North-east of Dubbo and south of Gilgandra there are sizable areas of production forestry, as well as north-east of Coonamble on the border with the Namoi subregion. The Macquarie Marshes, Warrumbungle Ranges and a small belt of land in the upper Talbragar catchment on the Namoi-Hunter divide are used for nature conservation. The lands around Dubbo are a focus for intensive land uses. 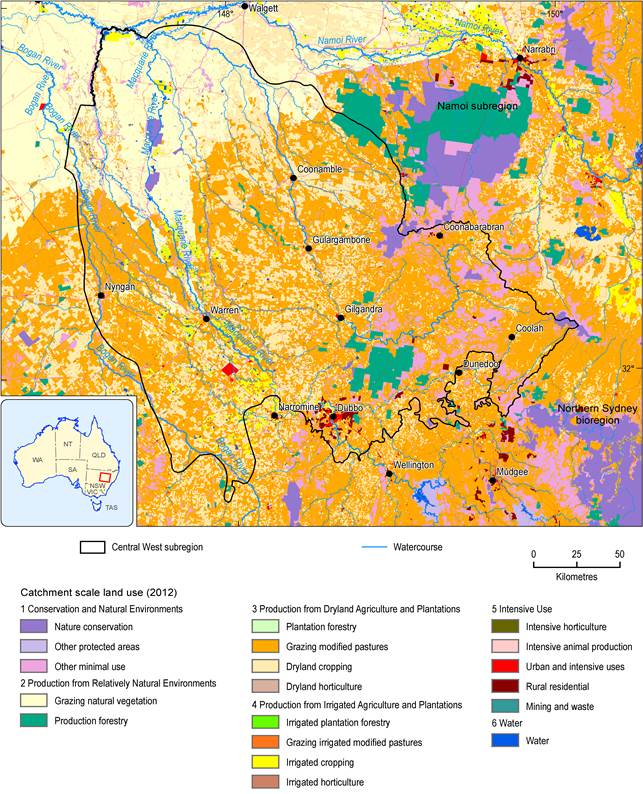 Figure 9 Land use in the Central West subregion

Table 5 Land use areas in the Central West subregion

In late 2012, the NSW Government introduced its Strategic Regional Land Use Policy to protect valuable residential and agricultural land across the State from the impacts of mining and coal seam gas activity (NSW Government, 2014). Information was released in January 2014, identifying the areas of Biophysical Strategic Agricultural Land – land of high quality soil and water resources capable of supporting high levels of agricultural production – across NSW, which are deemed necessary to support the state’s $12 billion per year agricultural industry. Other coal seam gas exclusion zones were also identified (Figure 10). 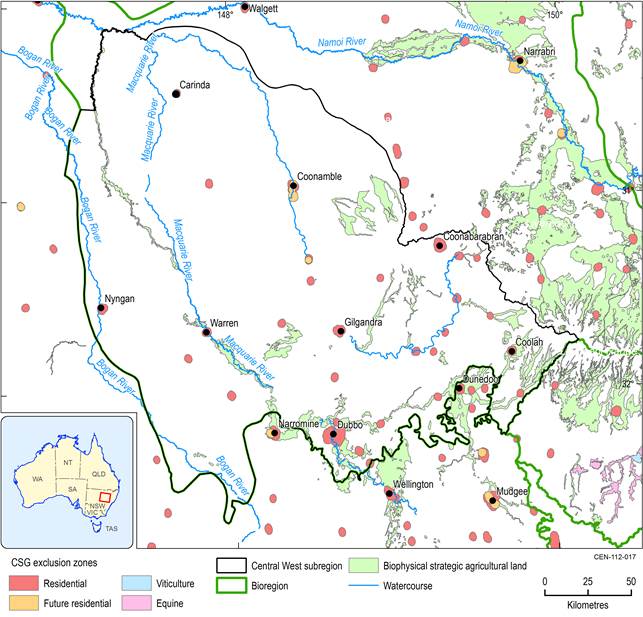 The Macquarie river basin formed part of the lands originally occupied by the Wiradjuri, Wailwan, Wongaibon and Ngemba Aboriginal nations. The name Wiradjuri means 'people of the three rivers' and refers to the Macquarie, Lachlan and Murrumbidgee rivers, which were the primary source of food for the Wiradjuri people. The Wailwan people inhabited the area between Gilgandra and Brewarrina, centred around the town of Warren and including the Macquarie Marshes. The Wongaibon people occupied lands to the west of Nyngan in the west of the subregion.

Terramungamine Aboriginal Place, near Dubbo, is the only Indigenous burial ground listed under section 86(4) of the NSW National Parks and Wildlife Act 1974 (NPW Act), which protects listed sites from harm or desecration. The area is covered by the Terramungamine Indigenous Land Use Agreement and is managed by Dubbo City Council. Scarred trees, grinding groves, Indigenous burials and other Indigenous objects can be found there. There are other significant Indigenous sites near Narromine, north-west of Nyngan and north-east of Coonabarabran, that are located outside the subregion.