Australia is well-endowed in resources of both black and brown coal (Figure 3). The main coal‑bearing basins occur in the eastern states of Australia and include the Bowen, Surat and Sydney basins for black coal, and the Gippsland Basin for brown coal. Most of Australia’s black coal resources are of Permian or Jurassic age, whereas brown coals are geologically younger and were commonly deposited in either the Paleogene or Neogene (i.e. within the past ~65 million years). The combined tonnage of known coal resources in Australia accounts for approximately 9% of the entire global coal inventory (Geoscience Australia and BREE, 2013). Australia is also a significant international producer and exporter of coal, with total raw coal mined in Australia in 2012 in excess of 500 Mt. 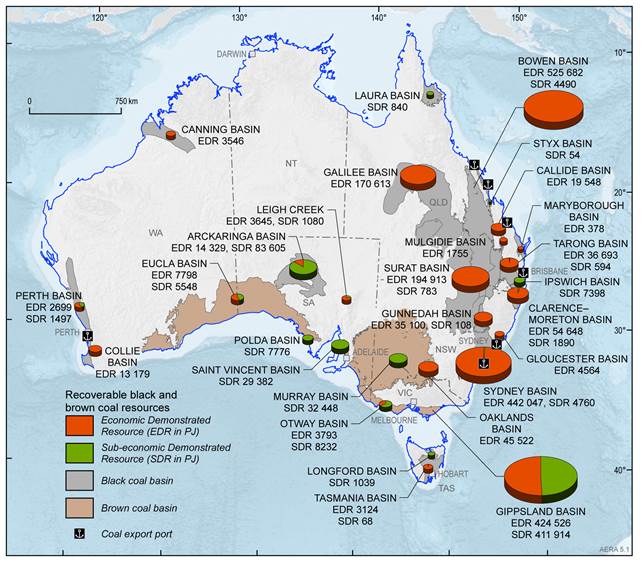 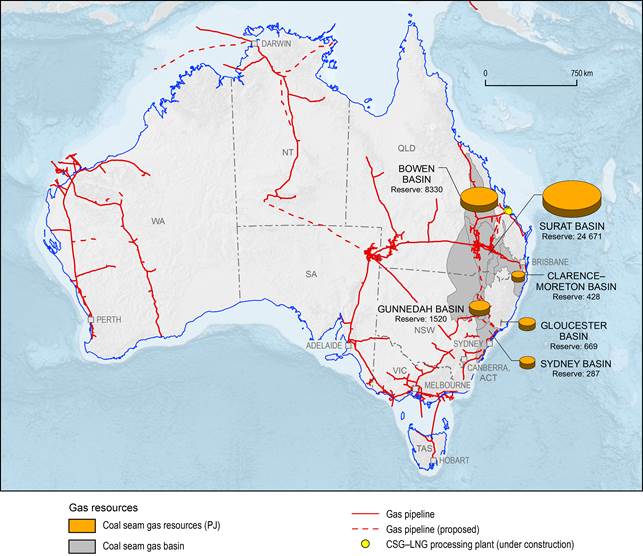 The classification of Australia’s coal resources is based on the national system for classifying identified mineral resources (Geoscience Australia and BREE, 2013). This classification scheme provides a suitable and readymade framework that is used as the initial basis for helping to determine the coal resource development pathway in each bioregion and subregion. Australia’s national classification schemes for both mineral and petroleum resources are largely based on, and compiled from, information reported for individual mineral deposits and petroleum accumulations by resource development companies, although they take a long-term view (20 to 25 year time frame) of the feasibility of economic extraction (Geoscience Australia and BREE, 2012; Geoscience Australia and BREE, 2013). This information is reported by individual resource companies following a set of mandated standards (stipulated by the Australian Securities Exchange (ASX)) for the reporting of mineral and resources data. For mineral resources (which include coal), the reporting guidelines are provided by the Joint Ore Reserves Committee (JORC) Code. For petroleum resources, most companies follow the Society of Petroleum Engineers’ Petroleum Resources Management System (SPE-PRMS) (SPE et al., 2011).

Both the JORC Code and the SPE-PRMS system are compatible with the Australian national classification system (both having evolved from the McKelvey resource classification system used in the USA), such that public resource announcements made by companies for individual deposits are compiled by Geoscience Australia and used as the basis for preparing the annual update on the national coal and CSG inventory (Geoscience Australia and BREE, 2013).

The publicly reported data and information are compiled, evaluated and aggregated into the various categories of the national classification scheme to provide a reliable estimate of the national resource base. The national resource classification scheme recognises resources based on the degree of geological assurance of the commodity, coupled with the economic feasibility of extracting the resource (either now or into the future). The former is based on the type, tonnage and grade of the resource, whereas the latter is based on economic considerations such as commodity prices, capital and operating costs, and any applicable discount rates. These concepts are illustrated in Figure 5. 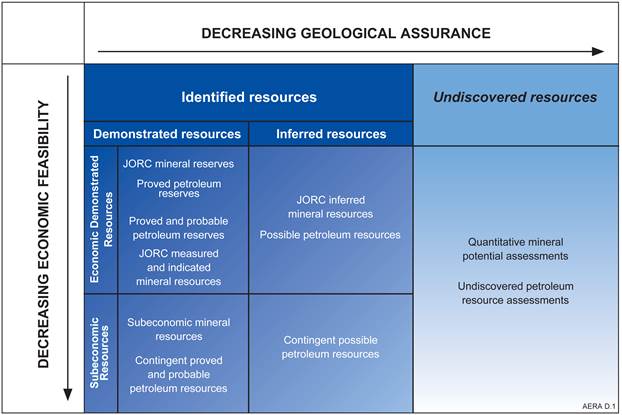 The Australian resource classification scheme is used as the initial basis for defining the coal resource development pathway in BAs, specifically by determining which resource projects are included in the catalogue of potential coal and CSG resource developments (Section 1.2.4 of companion product 1.2). This provides an appropriate mechanism to align the coal resource development pathway with the existing national coal and CSG resource categories. This approach has the benefit of being based on an independent and widely used national system. Furthermore, it provides the opportunity to broaden the scope of individual deposits and projects assessed in the Programme (in line with recommendations from the Independent Expert Scientific Committee on Coal Seam Gas and Large Coal Mining Development), as it is not contingent on regulatory procedures imposed as part of the EIS (or other regulatory assessment) pathway.

The national inventory category with the highest degree of both geological assurance and economic feasibility is referred to as economically demonstrated resources (EDR) (Figure 5). This national class combines the JORC categories of ‘proved reserves’ and ‘probable reserves’, as well as ‘measured resources’ and ‘indicated resources’. Consequently, EDR is considered to provide a valid and objective estimate of the coal resources that will likely be mined in the long term (usually taken as the time frame within the next 20 to 25 years following publication) (Geoscience Australia and BREE, 2013). It is expected that, in most bioregions and subregions, resource projects with an EDR will be included in the coal resource development pathway. In comparison, it is likely that only a subset of the subeconomic and inferred resources within each bioregion or subregion will be considered sufficiently well understood (and likely to be developed in future) to be included in the coal resource development pathway.