The objective is to choose the set of global climate model (GCM) seasonal scaling factors that give the median change in mean annual precipitation in the Gloucester subregion. There are 15 available GCMs with seasonal scaling factors for each of the four seasons: summer (December–February), autumn (March–May), winter (June–August) and spring (September–November).

The scaling factors are applied to scale the daily precipitation in the climate input series that is generated for 2013 to 2102. The resulting annual precipitation time series for the Gloucester subregion is shown in Figure 6. It depicts a cycle of 1983 to 2012 climate that is repeated a further three times but with increasingly trended climate change scalars. It can be seen from Figure 6 that the decrease in precipitation from 2013 to 2102 is less than the typical interannual variability. Furthermore, it reduces annual precipitation rates to levels that remain much higher than were typically encountered in the first half of the 20th century. 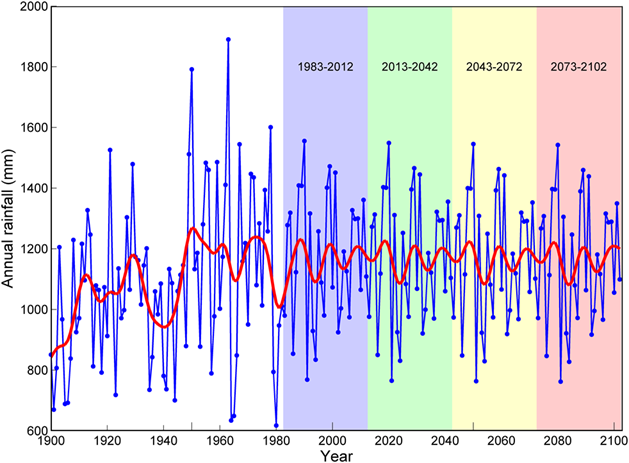