2.3.2.6 Conceptual uncertainties of geology and hydrogeology

Some simplifications are always needed in three-dimensional geological models. In the Clarence-Moreton bioregion, such simplifications mean, for example, that stratigraphic units that only occur locally or have poorly understood relationships to other units (e.g. Woodenbong Beds), are not identified as separate model units. In addition, no differentiation was made in the Clarence-Moreton three-dimensional geological model between different types of Quaternary sediments (e.g. alluvial sediments, coastal sands or shallow marine sediments) in the coastal regions of the Richmond and Clarence river basins. These differences cannot be resolved at the regional scale of the models developed for this BA, and would require small-scale models that specifically focus on these areas. 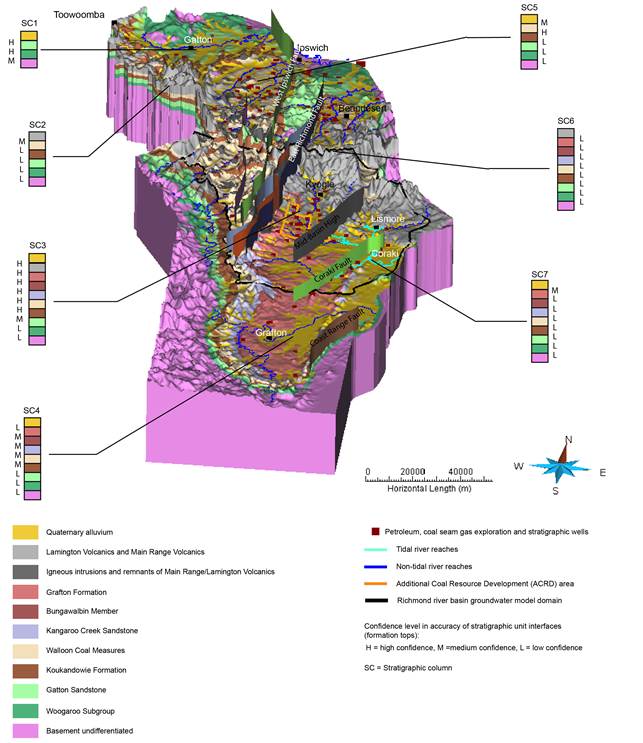 Selected stratigraphic sections (SS) are shown to give examples on variations of geological uncertainty across the Clarence-Moreton bioregion. Selected major faults and other structural elements are projected as vertical surfaces on the three-dimensional geological model.

In this section, the spatial distribution of uncertainties of the three-dimensional geological model of the Clarence-Moreton bioregion, which was related to data density, data quality, geological complexity and geological uncertainties, is explained using multiple stratigraphic columns (Figure 29). These stratigraphic columns show the distribution of the stratigraphic units in various parts of the Clarence-Moreton bioregion together with a qualitative assessment of the confidence in the accuracy of layer boundaries varying from high, medium or low. This qualitative assessment is based on the availability of different data sources (e.g. groundwater bores, exploration wells or seismic data; Raiber et al., 2016) and how they characterise the geometry of different geological layer boundaries (which define the contact between geological formations). In high confidence areas, the three-dimensional geological model is likely to predict the depth where different stratigraphic units are intersected (i.e. formation tops) with a relatively high degree of accuracy. Conversely, where the confidence level is low, the discrepancy between the predicted and actual depth of formation top intersections observed at a new well that would be drilled at the same location could potentially be very high. Stratigraphic columns are described below:

Although outside of the scope of this BA, the understanding of conceptual geological uncertainties can be refined further in a more quantitative way. For example, formation top intersections from selected wells can be omitted when building the three-dimensional geological model, and the goodness-of-fit between the predicted formation tops and the actual formation top known from the well can be compared (Raiber et al., 2012). Different approaches of characterising and quantifying uncertainty in three-dimensional geological models have been proposed, for example, by Wellmann and Regenauer-Lieb (2012) and Lindsay et al. (2012).

2.3.2.6.2 Conceptual hydrogeological model uncertainty – what is known and unknown

Where rocks of contrasting hydraulic properties (e.g. aquifers and aquitards) are juxtaposed, faults can form barriers and/or preferential pathways for groundwater flow, which can lead to compartmentalisation of the regional groundwater flow systems (Raiber et al., 2015). The locations and orientation of major faults in the Richmond river basin are well known (e.g. Ingram and Robinson, 1996; Rassam et al., 2014; Raiber et al., 2016), and unlike elsewhere in the Clarence-Moreton bioregion, it is unlikely that there are any major regional fault systems where significant fault displacements occur that have not yet been identified. Well log and seismic data suggest that there is some degree of juxtaposition of aquifers and aquitards along major faults in the Richmond river basin, especially at the Coraki Fault and at the East Richmond Fault (Figure 29). Furthermore, there is evidence from the orientation of streams and groundwater chemistry data that the Coraki Fault may act as a partial groundwater flow path to the surface. Within available time and resources, no faulted three-dimensional geological model could be developed as part of the Clarence-Moreton Bioregional Assessment (Raiber et al., 2016). This limitation will be addressed as part of a CSIRO strategic project (‘Next generation methods and capability for multi-scale cumulative impact assessment and management’ (sub-theme ‘Tracer-based improvement of groundwater model conceptualisation and predictability’)). Another part of this strategic project is to use remote-sensing data to confirm whether there is any surface expression of the major faults. Environmental tracer sampling will be conducted at locations where discharge of deep groundwater to the surface is inferred based on the currently available evidence. However, the lack of deep and nested groundwater observation bores means that although this additional work will help to considerably reduce uncertainty, it will not be possible to remove all conceptual uncertainties on the hydraulic role of faults. Ultimately, to further reduce this uncertainty, nested groundwater monitoring bore sites are required.

Apart from the geological uncertainty, a major source of uncertainty in the conceptual hydrogeological models that can directly translate to uncertainties in the groundwater model is the rate and spatial variability of groundwater recharge. An evaluation of recharge was carried out as part of this BA (Figure 12). This recharge assessment is associated with uncertainties related to the spatial heterogeneity of geological materials, climatic variability and the scarcity of climatic and hydrogeological data, as highlighted in companion product 2.1-2.2 for the Clarence-Moreton bioregion (Raiber et al., 2016) and in many scientific publications (e.g. Scanlon et al., 2002). However, despite these uncertainties, the role of the Lamington Volcanics as the major recharge area within the Richmond river basin, where recharge rates are at least an order of magnitude higher than recharge rates to the sedimentary bedrock, is well understood. Furthermore, it is supported by multiple lines of evidence discussed earlier in this section, such as groundwater chemistry data, stream flow rates and general understanding of the link between the alluvial aquifers and the Lamington Volcanics.

It is also well understood that the Lamington Volcanics are simultaneously a major discharge area (Brodie and Green, 2002), where a large proportion of the initial recharge discharges into the stream locally with short lag times and following short flow paths. Only a small proportion of this recharge percolates to deeper aquifers. Hence, there are many springs feeding streams and generating most of the stream flow in the Richmond river basin (Figure 27). This is also documented by multiple lines of evidence, such as water chemistry data, stream flow rates and the association of springs and other groundwater-dependent ecosystems (GDEs) with this feature. Furthermore, the critical hydrological significance of the volcanics as the source for much of the current surface water and groundwater extraction in the Richmond river basin is also underpinned by analogues from other catchments within the Clarence-Moreton bioregion (e.g. Lockyer Valley or Bremer river basin) where more data are available.

A further source of uncertainty in the conceptual hydrogeological model relates to the connection between aquifers and aquitards. Hydraulic connection between aquifers can be controlled to varying degrees by geological structures (discussed above), aquifer composition, aquifer geometry and internal aquifer architecture (e.g. Raiber et al., 2015). In the context of aquifer connectivity in the Richmond river basin, the main uncertainty is related to the lack of petrophysical data of aquitards. In the West Casino Gas Project area, stratigraphic data from the dense network of CSG exploration wells indicate that the aquitards are laterally continuous. If inferred aquitards such as the Maclean Sandstone and the Bungawalbin Member are an ideal regional seal, then they should limit or prevent the vertical hydraulic connection between the overlying and underlying stratigraphic units (i.e. between the Walloon Coal Measures and shallower aquifers) within the West Casino Gas Project area. The high gas saturation levels described by Doig and Stanmore (2012) confirm that there is an effective seal in place in the central part of the Richmond river basin near the West Casino Gas Project. However, even if there are effective aquitards present that limit propagation of impacts associated with the depressurisation of the Walloon Coal Measures to shallower aquifers or the surface within the West Casino Gas Project area, there can still be connectivity elsewhere. For example, where the sedimentary bedrock units thin and pinch out at the surface or where they subcrop underneath the alluvium at the down-gradient end of long regional flow paths at the eastern margin of the Clarence-Moreton bioregion in the Richmond river basin, there is likely to be upwards discharge of deep groundwater to shallow aquifers or to the surface. Without data from nested groundwater monitoring bores, there is no direct evidence to determine to what extent vertical groundwater fluxes between different hydrostratigraphic units occur within the Richmond river basin. However, auxiliary evidence from hydrochemical data (i.e. the freshness of most alluvial groundwaters at the eastern boundary of the Clarence-Moreton Basin) within the Richmond river basin and other catchments within the Clarence-Moreton bioregion (Section 2.3.2.2.4) suggests that discharge from sedimentary bedrock is not the major source of water for alluvial aquifers. In most areas, this sedimentary bedrock discharge component is likely to be overwhelmed by other sources such as the contribution from the Lamington Volcanics or surface water recharge during ‘normal’ (i.e. non-drought) climatic periods, but may become more important in some areas during droughts.

Summary and download
2.3 Conceptual modelling for the Clarence-Moreton bioregion

Data register for product 2.3 Conceptual modelling for the Clarence-Moreton bioregion