The Ipswich, Red Cliff and Evans Head coal measures are time equivalents (Figure 3) and are therefore discussed together in this section.

The Late Triassic Ipswich Coal Measures outcrop along the eastern part of the Ipswich Basin south of Ipswich (Figure 4). The unit is absent west of the West Ipswich Fault, and is covered by the sedimentary sequences of the Walloon Coal Measures and the Bundamba Group throughout the remainder of the Laidley sub-basin in Queensland (Korsch et al., 1989; Chern, 2004). In NSW, well completion reports and seismic data (e.g. Ingram and Robinson, 1996) demonstrate that the Ipswich Coal Measures (and time equivalents) and the Nymboida Coal Measures are covered by at least 1500 m to 2000 m of younger Clarence-Moreton Basin sequences in the central part of the basin (Figure 6). A combined thickness of the Ipswich (and equivalents) and Nymboida Coal Measures in the Clarence‑Moreton Basin in NSW of approximately 1600 m to 2000 m has been suggested by Hartogen Energy Ltd (1983) and Ingram and Robinson (1996).

More than 20 coal seams of the Ipswich Coal Measures have been mined in the past (Staines et al., 1995) at mines near Ipswich (e.g. Spring Hill, Swanbank and New Hill; Figure 4).

Coal seams of the Late Triassic Evans Head Coal Measures are contained within sequences of sandstone, carbonaceous shale and conglomerate. The Evans Head Coal Measures outcrop at isolated locations at the eastern basin margin. They have a total thickness of approximately 600 m, but the coal seams are generally thin, ranging between 0.3 and 1.5 m (Wells, 1995; Stewart and Alder, 1995).

The Red Cliff Coal Measures have a total thickness of approximately 600 m, and consist of shale, sandstone, breccia and coal (Wells, 1995). They outcrop only in isolated areas at the south-eastern basin margins. 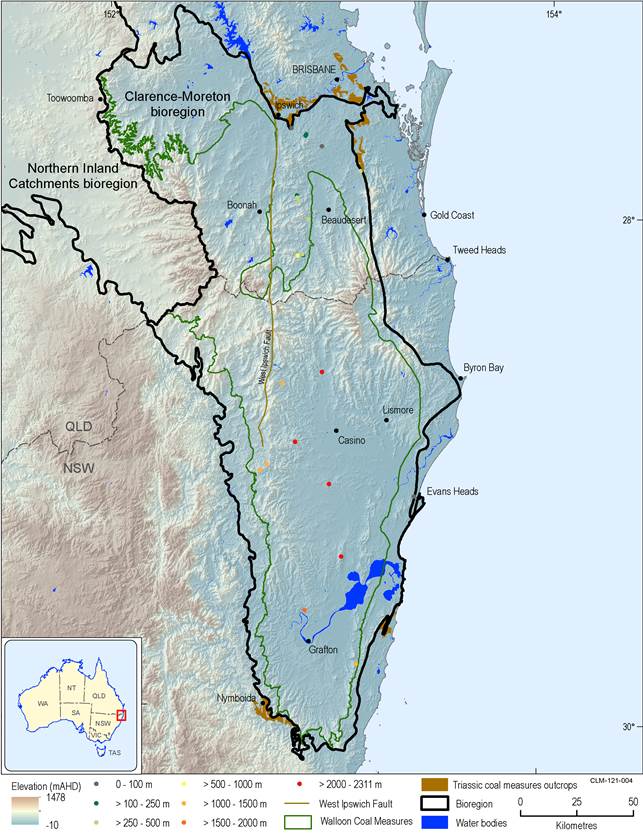