The impact and risk analysis (Box 8) investigated how hydrological changes due to additional coal resource development may affect water-dependent assets, such as bores, wetlands or heritage sites.

A total of 2660 water-dependent assets (listed in Dataset 10 and Bioregional Assessment Programme (2017)) were identified for the subregion (Table 3):

Potential impacts on water-dependent assets were assessed by overlaying their extent on the zone of potential hydrological change (Table 3).

aNumbers for economic assets are not individual bores; they are water access entitlements that could include one or multiple bores.

bOf the 135 sociocultural assets, 35 Indigenous cultural assets are cultural values associated with animals and plants that do not have geographic location information, which means they cannot be specifically assessed for potential impacts due to additional coal resource development. See Table 29 in the impact and risk analysis (Holland et al., 2017) for more details.

No protected reserves, parks, bird habitats or key environmental assets are within the zone of potential hydrological change. Also, none of the 882 water-dependent assets classified as ‘Floodplain’, ‘Lake, reservoir, lagoon or estuary’, ‘Marsh, sedgeland, bog, spring or soak’ or ‘Waterhole, pool, rock pool or billabong’ are within the zone. This includes the 177 springs assessed in ‘Which landscape groups are very unlikely to be impacted?’.

Of the 2215 ecological water-dependent assets in the assessment extent, 115 are subject to potential hydrological change due to additional coal resource development. This does not mean that these 115 assets are definitely impacted – finer resolution models are required for that local-scale assessment of impact. At this stage, however, there is not compelling evidence to rule out impacts.

Water-dependent assets that are potentially impacted by drawdown due to additional coal resource development include:

See Section 3.5.2 in the impact and risk analysis (Holland et al., 2017) for more details, including a literature review of the nature of the water dependency of these assets.

There are 9990 individual bores within the assessment extent (Table 4). Of the 163 bores in the zone of potential hydrological change, 20 water access rights and 6 basic water rights (stock and domestic) have a greater than 50% chance of exceeding 5 m of drawdown due to additional coal resource development (Figure 11). The modelled open-cut mine pits for the New Acland Stage 3 coal mine and The Range coal mine contain 9 of these 163 economic bores. The larger values of maximum drawdown occur in bores close to the mines or within the modelled pits, which cover around 40 km2, and the maximum drawdown in these bores occurs in the years immediately following mining activity (see Figure 25 and Figure 26 in Janardhanan et al. (2016)). Smaller values of maximum drawdown are observed in bores located further from the mines and occur in later years when the drawdown propagates to these bores.

The bores are managed by the Condamine and Balonne water plan and the Eastern Downs, Surat, Surat East and Surat North groundwater management units in the Water Resource (Great Artesian Basin) Plan 2006. No bores in the zone access groundwater in the deeper Bowen Basin aquifers underlying the GAB (see Table 33 in the impact and risk analysis (Holland et al., 2017)).

aAssets are combinations of one or more elements (individual spatial features – points, lines and polygons). For example, an asset might be a collection of bores. 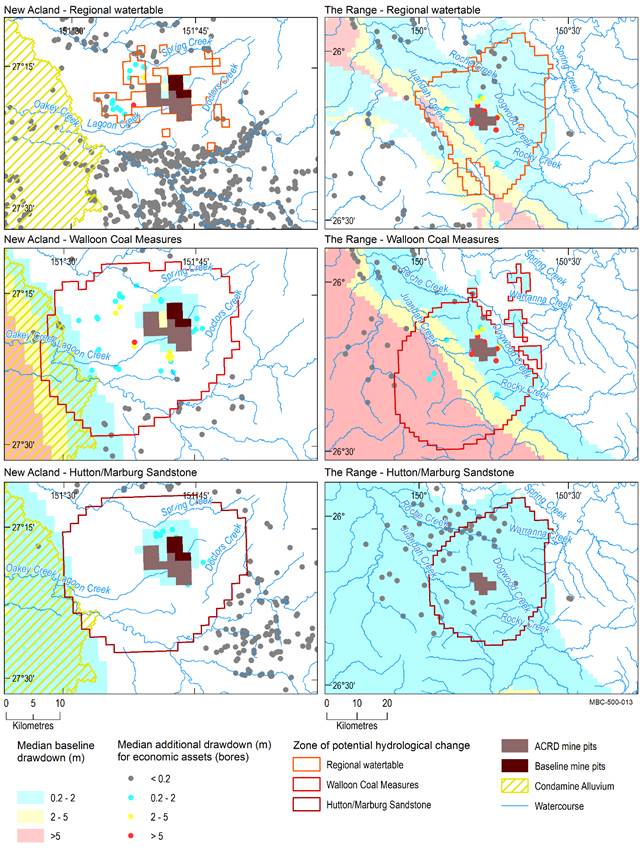 Sociocultural assets that fall outside the zone of potential hydrological change include 50 heritage sites, 3 Indigenous sites and 26 recreation areas, including national parks and areas of remnant vegetation. These have a less than 5% chance of impacts due to additional coal resource development.

Separate reports on Indigenous water assets in the Queensland and NSW parts of the Maranoa-Balonne-Condamine subregion contributed to this assessment (Constable and Love, 2015). Consultation with Traditional Owners in the Maranoa-Balonne-Condamine subregion identified an additional 56 Indigenous assets, which were included in the water-dependent asset register (Bioregional Assessment Programme, 2017) and used for the impact and risk analysis. Of these, 35 are cultural values associated with animals and plants that do not have geographic location information, which means they cannot be specifically assessed for impacts due to additional coal resource development.

Additional drawdown in the regional watertable in excess of 2 m is not very likely within the forest and is very unlikely to include more than 6 km2 of the forest.

Barakula State Forest is located along the eastern edge of the zone of potential hydrological change near The Range coal mine (Figure 7 and Figure 9). It is water dependent based on the presence of floodplain and wetland areas and shallow groundwater within its extent. However, finer resolution models are better placed to assess potential impacts at a local scale.