The Maranoa-Balonne-Condamine subregion covers 144,890 km2 and includes the headwaters of the Condamine River and the Maranoa River as well as the floodplains of the Upper Darling Plains (Figure 1). The main population centres are Chinchilla, Dalby, Goondiwindi, Roma, St George, Toowoomba and Warwick.

This assessment focused on water-dependent landscapes and assets that are potentially impacted by changes in groundwater due to additional coal resource development (Box 2). The assessment extent covers an area of 129,956 km2.

The main natural and human-modified ecosystems in the assessment extent were categorised in a landscape classification (Box 7), which was based on the subregion’s geology; the physical features of the region, known as geomorphology; hydrogeology, which describes the way water moves underground; land use; and ecology. See ‘What are the potential impacts of additional coal resource development on the landscape?’ for more information.

Assets were identified for their ecological, economic, or sociocultural values, such as a wetland providing habitat for waterbirds, river water used for agriculture, or a sacred site with cultural significance. See ‘What are the potential impacts of additional coal resource development on water-dependent assets?’ for more information.

Coal is extracted from open-cut mines in the Clarence-Moreton and Surat geological basins. Although the southern part of the Bowen Basin underlies the Surat Basin in the subregion, it contains no economic coal deposits. The major coal deposits in the Walloon Coal Measures in the Surat Basin occur near Brigalow, Chinchilla and Macalister.

The five baseline open-cut coal mines in the subregion are Cameby Downs Mine, Commodore Mine, Kogan Creek Mine, New Acland Coal Mine Stage 2 and Wilkie Creek Mine (which ceased operations in December 2013) (Figure 1).

CSG development in the subregion has escalated in the recent past, as illustrated by construction of three large-scale liquified natural gas (LNG) export plants on Curtis Island near Gladstone, Queensland. A large portion of the gas to be supplied to the LNG plants will be extracted from the Walloon Coal Measures in the subregion and transported to Curtis Island via pipelines. (LNG is any type of natural gas, such as CSG, that has been cooled into liquid form for storage and transport.)

For this assessment, the five CSG gas fields included in the baseline are Australia Pacific LNG Project, Santos Gladstone LNG Project, Queensland Curtis LNG Project, Surat Gas Project and Ironbark Project. To be consistent with OGIA, the CSG developments reported in Queensland’s Office of Groundwater Impact Assessment (OGIA) Annual report 2014 for the Surat underground water impact report (OGIA, 2014) are all deemed to be in the baseline even though the Ironbark and Surat Gas projects had not commenced commercial operation as of December 2012 (which is the standard cut-off to be included in the baseline). The timeline of construction and production for each coal resource development represented in the adapted OGIA groundwater model is shown in Figure 2. 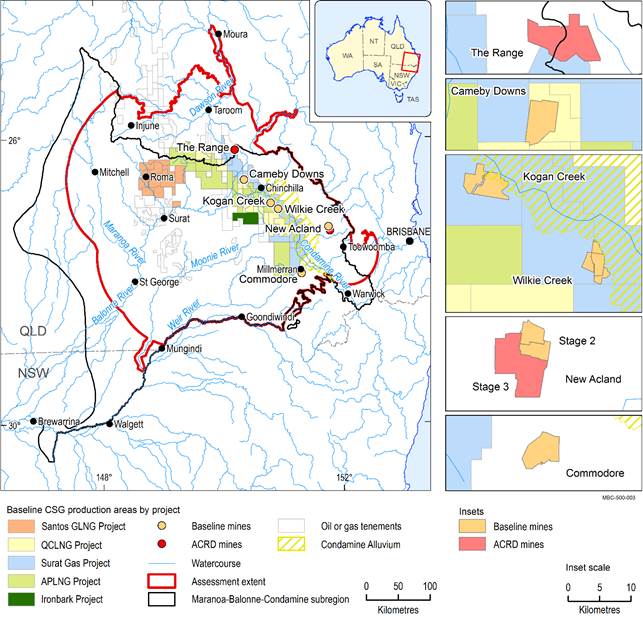 The CRDP for the subregion (Box 2) is based on known coal resource development proposals as of July 2015. However, proposals may have changed since then and may continue to change into the future. 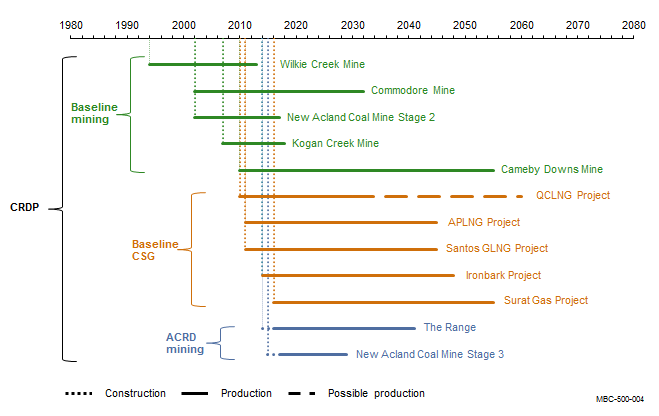